Gov. Gavin Newsom is heading to Iowa later this month to campaign for California Sen. Kamala Harris. Newsom has ruled out running for president himself this round, but the trip will be a test of how much attention he gets in the state.

His Iowa stops will include a “climate action house party” on Dec. 15.

Remember: While Iowa’s political values center on farming, the state is only second best and $20 billion behind California when it comes to farmgate sales — a point Newsom will likely not be eager to share with Iowans.

The Department of Water Resources announced yesterday that, based on current conditions, allocations are set at 10% for the State Water Project.

DWR Director Karla Nemeth said, “the dry start in October and November reminds us that California’s weather is extremely variable.”

The amount currently stored in the largest reservoir, Lake Oroville, is 90% of average, however. The Central Valley Project’s Shasta Lake, meanwhile, is 119% of average.

Keep in mind: The new water year began in October and this “conservative” assessment may be updated as more rain and snow fall throughout the winter, according to DWR. Snow surveys will begin in January.

During the last water year, DWR’s final allocations were decided in June, nudging up to just 75% following a wet winter. DWR also began that water year with just a 10% allocation. 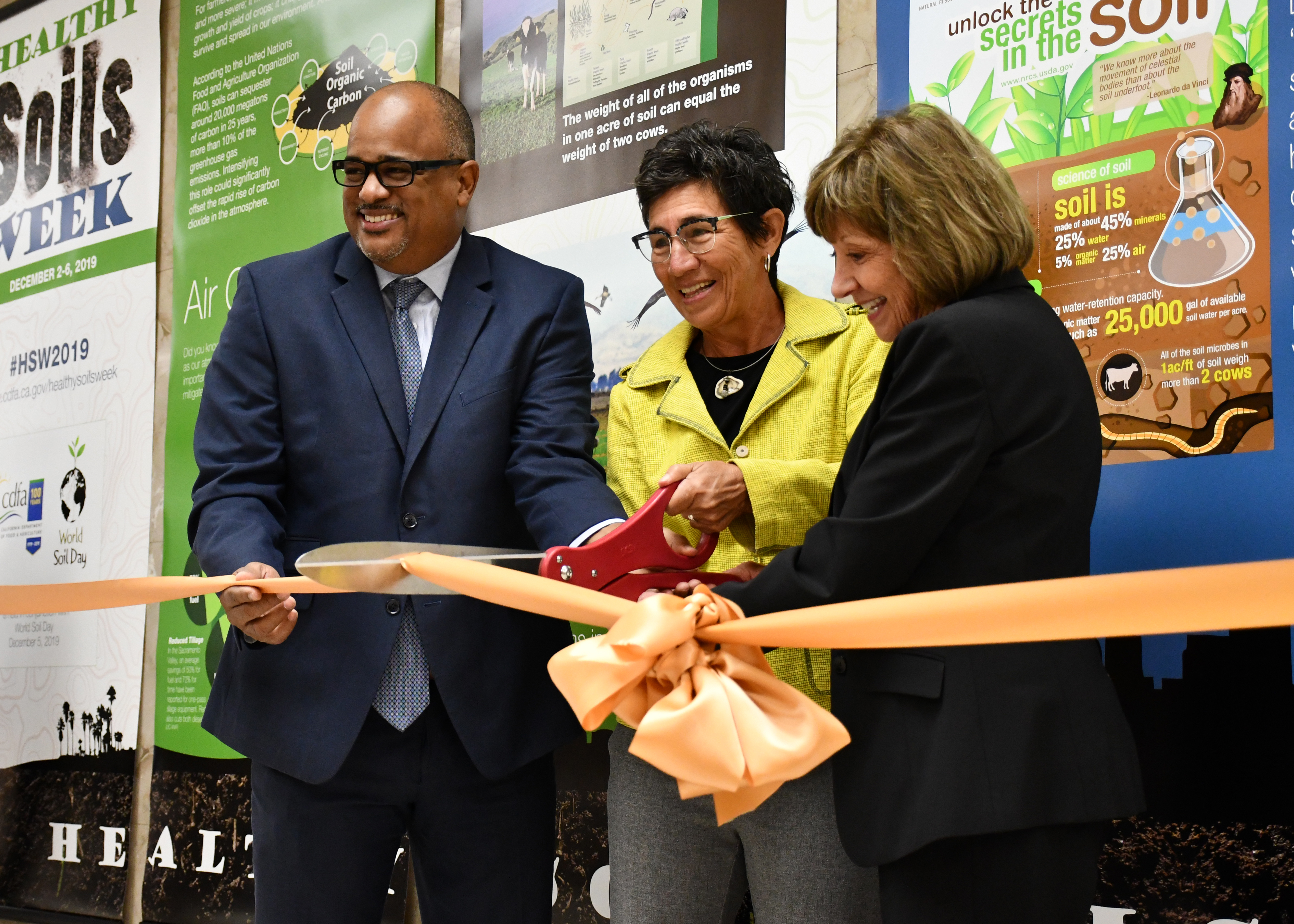 The public-facing wall of Gov. Newsom’s office is decorated this week with a series of panels espousing the benefits of CDFA’s Healthy Soils Program.

Crop rotation, low tillage, cover crops, organic fertilizers and other conservation practices improve air and water quality as well as biodiversity, according to the posters.

“Farming produces more than just the food or the energy or the fiber that's grown there,” said CDFA Secretary Karen Ross at a ribbon cutting event for the panels yesterday. She added: “It's what we do for our ecosystem, for our environment and to help sequester carbon to fight climate change.”

Assembly Ag Chair Susan Eggman said, “The more we grow and the more we take care of (the soil), the more we are able to not only feed the world but continue to fight climate change.”

NRCS State Conservationist Carlos Suarez pointed out his agency has focused on soil health since the Dust Bowl pushed a wave of migrant farmers to California more than 85 years ago. Suarez explained that “protecting the soil is going to also protect the environment for many decades to come.”

Still in a turkey coma? While the governor did not step outside his office for the event, he has been a strong proponent of the program begun under his predecessor Jerry Brown.

An environmental coalition including the Natural Resources Defense Council, animal rights interests and sportfishing groups filed a lawsuit in a federal district court yesterday against federal wildlife agencies. The claim challenges the October biological opinions regarding endangered fish impacted by the state and federal water projects.

Rachel Zwillinger of Defenders of Wildlife argues the new report is “designed to maximize the amount of water that is diverted to industrial agriculture.”

Remember: Newsom’s administration recently vowed to sue the agencies over the biological opinions as well. Attorney General Xavier Becerra, who has sided with these groups in previous anti-Trump lawsuits, has not yet indicated if his office will join this claim.

USMCA deal this week or no vote in 2019, chairman says

The House is back in action today, and one of the biggest questions facing lawmakers is how soon the U.S.-Mexico-Canada Agreement might be ready for a vote.

After talking to members of the House and the Trump administration, Senate Finance Committee Chairman Chuck Grassley said Monday he believes a “deal is close” to allow a vote on the trade pact. But he said if House Democrats and the White House can’t strike a deal on USMCA this week, there won’t be enough time to ratify it this year.

“The end of this year’s legislative session is rapidly approaching,” Grassley, R-Iowa, said in a speech on the Senate floor. “As it is, the window of opportunity for 2019 is extremely tight. Now is the time for Democrats to finally act.”

Keep in mind: Mexican and Canadian officials have told the White House that they are agreeable to what House Democrats are demanding in a USMCA deal. All that appears to be missing is a nod from the White House, which needs to write up implementing language for the pact.

In a proposed update to its Strategic Plan for Research, NIMH said it plans to test innovative approaches for improving both the quality of care and access to it “for racial and ethnic minority groups, sexual and gender minorities, individuals living in rural areas, socioeconomically disadvantaged persons, and other underserved groups.”

The original plan did not contain those specific priorities.

NIMH, a unit of the National Institutes of Health, has asked for comments on the proposal, which is published in today’s Federal Register.

On that note: CDFA Secretary Karen Ross and Natural Resources Secretary Wade Crowfoot were asked in March about mental health support for farmers impacted by the next drought.

Crowfoot responded: “We have to figure out how to provide those mental health services” to victims of “slow-moving disasters” like drought.

Ross added that “we need to consider the social science element” for every policy decision made. She said, along with better services, better broadband connectivity could help in tackling the isolation often felt by those in rural communities.

“The full scope of the changes this measure would put in place is highly uncertain.” – Staffers from the Legislative Analyst’s Office, in a letter explaining how the fiscal impact is too extensive to calculate for a proposed ballot initiative that would force nearly all California agriculture to be organic.