Agricultural policy has seldom received as much attention as it has in this presidential campaign so far as Democrats vie for ways to cut into President Donald Trump’s rural base and win Iowa’s first-in-the-nation’s caucuses amid heightened anxiety in the farm economy.

Most of the candidates have released detailed rural and ag policy recommendations, many of which call for tens of billions in new spending. The extra money is largely directed at improving broadband and other infrastructure or at programs that would pay farmers for increasing soil carbon as a way of addressing climate change.

On the stump in Iowa, candidates are also seizing on farmers’ anxiety about President Donald Trump’s trade war with China and the Renewable Fuel Standard exemptions that the Environmental Protection Agency has granted to small refineries.

Buttigieg, who’s currently leading the polls in Iowa, was one of six candidates to speak and answer questions at the event, the second IFU has held this year.

Buttigieg said “farmers are being squeezed by all sides: squeezed by consolidation, giving folks fewer and fewer places to buy from or to sell to; squeezed by a trade war that nobody around here asked for and that even the MFP (Market Facilitation Program) isn’t making folks whole on; squeezed by a policy around so-called small refinery waivers.”

Buttigieg is currently favored by 24% of Iowa Democrats, according to the latest RealClearPolitics average of polls in the state, followed by Vermont Sen. Bernie Sanders at 18.3%, Massachusetts Sen. Elizabeth Warren at 17.7%, former Vice President Joe Biden at 16.3% and Minnesota Sen. Amy Klobuchar at 5.3%.

Don Wiviott, a Des Moines-based investor in organic agriculture, says the Democratic interest in farm policy is “much higher” than it has been before.

“Democrats are pretty conscious about not ignoring the Midwest this time around,” Wiviott said, speaking at an Iowa Organic Association meeting in Story City after an appearance by Sanders.

Interested in more coverage and insights? Receive a free month of Agri-Pulse or Agri-Pulse West by clicking here

What’s also different during this campaign - besides the fact that Democrats are trying to make inroads into the rural Midwest - is that the candidates now see farmers as a solution to climate change, Wiviott said, rather than a political obstacle to addressing the issue.

“Previously there was this kind of ubiquitous lack of understanding that you could end climate change by restoring soil. Slowly but surely this conversation has made its way into what these candidates are doing in terms of applying on their platform,” he said.

IFU President Aaron Lehman told Agri-Pulse it will be hard for Congress to address climate change if farmers don't see that it "can benefit their farm and their sustainability, their profitability."

At the organic farming event, Sanders pledged to "pay farmers to capture carbon. ... If all the agricultural community can be aggressive in maintaining good soil, and which will absorb carbon that will be an enormous contribution to fighting climate change, and we should be prepared to provide financial assistance for that."

Sen. Cory Booker, D-N.J., released a rural development plan last week that, among other things, proposed huge increases in funding for both the Environmental Quality Incentive Program and the Conservation Stewardship Program to $7 billion per year. Under the 2018 farm bill, EQIP and CSP were funded at $1.75 billion and $700 million respectively in fiscal 2019.

The New Jersey Democrat, who is tied for ninth in Iowa in the polling average, also called for planting billions of trees on federal, state and local lands.

Booker, who has been struggling to gain traction in Iowa, used a question about the climate issue to acknowledge that farmers are often wary of environmental regulators. The Obama administration’s climate bill foundered in part because of resistance from many agriculture groups as well as rural electric cooperatives who worried about its impact on energy costs.

Candidates spar over USMCA, say farmers should be in on climate change mitigation
Candidates back diet changes, electric vehicles to fix climate
Candidates get detailed on farm policy in bid for rural votes

“We Democrats don’t have clean hands on this,” Booker said, referring to environmental regulation and specifically citing the Obama-era “waters of the U.S.” rule that would have expanded the jurisdiction of the Clean Water Act.

“There are practices going on right now in Iowa that the rest of the country can learn from about soil preservation, about pulling carbon out of the air, about protecting water.”

To emphasize his point about the importance of including farmers in addressing climate policy, Booker said, “If it doesn’t make economic sense, it’s not going to happen.” 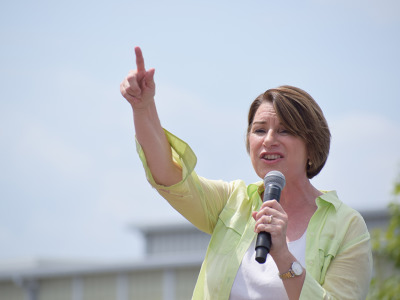 Minnesota Sen. Amy Klobuchar told IFU members that while the candidates agree on making the U.S. carbon neutral, “we’ve got to make sure we do it in a way that brings people with us, and that we have a plan, especially in our rural areas, that it works for them.”

Whether the climate message ultimately wins over rural voters is another matter. Jerry Rosman, an IFU board member who farms near Harlan in western Iowa, thinks the climate proposals are aimed more at the Democratic urban base than they are farmers, whose bigger concern is their current income.

"All they're worried about is the bottom line. … Nobody’s worried about even next year, it’s just the next quarter,” Rosman said.

The candidates are less clear about what they do to address the more immediate challenges facing the farm economy, including the trade war with China, although they are pledging to end the practice of giving SREs from the RFS, something EPA says it is required to do by law, and to crack down on agribusiness mergers.

In his appearances before the Organic Association and the Farmers Union, Sanders reiterated his proposals to increase commodity prices by instituting supply management, an idea shared in some degree by Warren, but difficult to get through Congress because of its impact on markets.

“We have got to bring young people into agriculture, and the way that we do that is not only by making public colleges and universities tuition free, but making sure that they have a decent income,” Sanders said.

Warren proposed in August to boost commodity prices by taking land out of production and to raise USDA’s marketing loan rates to ensure that farmers can cover the costs of what they do grow. The rates are currently well below production costs.

Asked what she would do improve the farm economy, Klobuchar said among things that she would take a more focused negotiating approach with China and also would “support a reauthorization of the farm bill,” including “any emergency funding that we need.”

He called for tougher antitrust enforcement and then pivoted to talking about the need to open new markets for U.S. commodities. “The reverse is happening as long as we’re in this trade war,” Buttigieg said.