A major equipment manufacturer underscored the need for broadband connectivity in some of America’s most rural places by featuring “see and spray” technology at the recent Consumer Electronics Show (CES) in Las Vegas.

“There’s a computer on board that is in real time using a machine-learning algorithm that has been trained to categorize, ‘is what I’m looking at a plant or a weed?'” Sauder said.

The individual sprayer nozzles then selectively apply herbicide to the weeds. A traditional sprayer applies its product across the entire length of the boom until being manually shut off.

“Because of the individual nozzle control and all of those sensors and processors that are on this, we can ensure we are putting the right amount chemicals on the ground,” Sauder said.

Sauder said right now, the technology is in the development and testing stages.

Deere’s technology sounds great, but producers need broadband connectivity for that type of equipment to transmit data properly from the field to their devices. Some areas across the U.S. still aren’t connected.

According to FCC’s 2019 Broadband deployment report, some 23.1 million Americans don’t have access to a fixed broadband connection.

One area that still has poor service is in southwest Iowa, where Duane Aistrope, of Randolph, grows corn and soybeans.

He told Agri-Pulse often not having a good connection causes a headache.

“Whether we’re out in the field trying to download our latest information up to the cloud ... sometimes it will take hours to download what you’ve done that day,” Aistrope said. “We go from having a good service to where you lose it completely.”

Aistrope said that's a problem when most days are a race against the clock due to incoming weather.

Sauder said Deere’s goal is not just to make the sprayer more intelligent, but to also help the producer utilize the data being gathered for use throughout the entire production system.

He said when applying crop inputs, data helps him apply them in a more finite way.

“It helps us apply more accurately and then also record perfectly what is applied where, and that gives a whole host of other benefits, not just farm record-keeping but also environmental stewardship,” Riekhof told Agri-Pulse.

Dan Leibfried, director of advanced technology at Deere, said the company has a distinct role to play when it comes to advocating to improve rural broadband. He said the biggest challenge isn’t the technology itself, but broadband coverage.

“Once we get coverage, we can start talking about how we layer that technology into a 5G related-space in order to improve our bandwidth, reduce latency, and connect to more devices simultaneously.” Leibfried told Agri-Pulse.

And not just 5G he said, but connectivity in general.

The task force’s goal is to drive public policy to accelerate connectivity in rural America. He chairs the subcommittee examining how precision agriculture utilizes connectivity.

“We’re in the process of forming working groups around each of the subcommittees. That should happen over the next few weeks,” Leibfried said.

The group then will develop a plan and a set of recommendations to the FCC and USDA for public policy over the next six months, he said.

The 2018 farm bill required the Federal Communications Commission and USDA to develop this task force to improve broadband identity gaps. 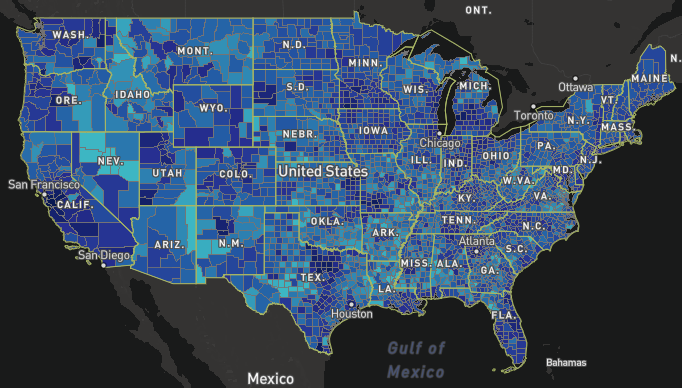 FCC has been criticized for its rural broadband mapping. This map, dated December 2018, shows the number of fixed residential broadband providers in a given county. Source: FCC

John Deere is not the only equipment company pushing for improved connectivity in rural areas. Companies like CNH Industrial, the parent company of Case IH and New Holland, are too.

“It’s not only fundamental to us but fundamental to our customers that rural broadband infrastructure continues to be fortified and built,” Danford told Agri-Pulse.

Danford said satellite and digital technology that relies on rural broadband is critical for farmers to get more production out of their acres, but spotty coverage has a tremendous impact.

John Deere and CNH are both members of the Association of Equipment Manufacturers. On its website, the group says rural broadband deployment across cropland does not meet the needs of production agriculture, such as farm machinery.

AEM would like to see rural wireless coverage expanded.

Last week, the Federal Communications Commission announced a $20.4 billion Rural Digital Opportunity Fund available over 10 years to build out high-speed internet. The commission plans to establish this fund at its meeting later this month.

NTCA-The Rural Broadband Coalition applauded the funding initiative, which FCC estimates could serve 6 million rural homes and businesses. NTCA CEO Shirley Bloomfield pointed in particular to a provision requiring the commission to go for the higher-speed applicant when the “clearing price” is reached for the auction.

In other words, once the bids don’t exceed the amount of available funding and “there is more than one bid to serve the same area, the bidder in the faster-speed tier would be declared the winner,” the FCC said.

Mike Romano, NTCA senior vice president of industry affairs and business development, called that provision “the linchpin” in the order being considered by the commission.

The commission won’t fund areas in census blocks already served by 25/3 Mbps broadband service, according to FCC maps. FCC has been criticized for using its existing data maps to identify gaps in broadband service, but it said “waiting for the availability of more granular data before moving forward with any part of the [RDOF] would only further disadvantage the millions of Americans that we know do not have access to digital opportunity.”

In addition, the commission said it would “exclude those areas awarded funding through the [USDA’s] ReConnect Program.”