But that’s not to suggest the demand for such innovation is new.

“Everyone talks about the pandemic, but I have not seen evidence that it accelerated what was already rapid developments,” said UC Davis ag economist Daniel Sumner. “Farm labor is more expensive and harder to secure and, if the pandemic did not make that worse, it introduced additional concerns of worker health and safety, which added costs per worker.”

In an industry with other increasing pressures, Walt Duflock, vice president of technology at Western Growers, said labor currently has the most urgency.

“The three problems, since I was a lad, have been labor, water and food safety,” he said, “and all you do is reshuffle the order.”

A 2020 report from the Department of Agriculture's Economic Research Service found long-term labor cost increases are prompting producers to "select less labor-intensive crops, invest in labor-saving technologies, and develop strategies to increase labor productivity." Several USDA agencies including the Agricultural Research Service, National Institute of Food and Agriculture, and Rural Development have programs aimed at addressing the need for new technologies and the infrastructure to operate them.

Better pest management and robotic arms for picking winegrapes are examples of innovations that reduce dependence on human hands. Duflock said the biggest advances have been with things that aren’t fragile — tree nuts that can be shaken off the branches, for example. He said the pace of ag tech has accelerated over the years, bringing artificial intelligence and large data sets into the world of specialty crop production. A couple hundred startups are launched in agriculture every year now, Duflock said. 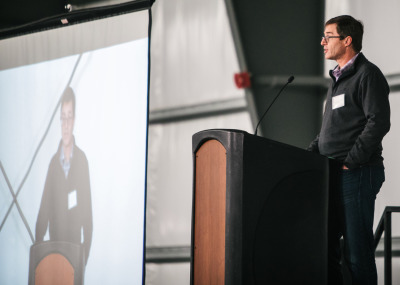 One of those is FarmWise, created by Seb Boyer and Thomas Palomares in 2016. They had an idea to use technology, automation, and artificial intelligence to help specialty crop growers reduce the number of people required to weed. To better understand the industry and develop their product, they needed to hear from farmers with firsthand knowledge of the specific challenges in their fields. That’s where the Western Growers Center for Innovation and Technology was able to help.

The Western Growers Association created the center in 2015 to “help identify industry priorities, discover technologies to address those priorities, set up testing, facilitate industry feedback, and communicate progress to California, Arizona, and Colorado fresh produce farmers,” according to its website.

“They do a good job at, first of all, educating farmers around innovation and educating entrepreneurs around farming,” Boyer said. “And then at putting both of these worlds together.”

When it first opened, the Center hosted six startup companies but has since grown to more than 75, including FarmWise.

“We were lucky to connect with the center quite early on,” Boyer said. “We could never reach the audience that we eventually reached without the center.”

The semi-autonomous weeder FarmWise developed relies on a robust set of data collected across many different fields, Boyer said, and has 12 robotic arms on the back for picking unwanted plants. Boyer said the company rolled out its product as a service that farmers would hire rather than a piece of equipment each operation would buy. Demand is growing. Lettuce was the first crop FarmWise trained its robot on, but Boyer said the company is expanding into broccoli, cauliflower, and other vegetables.

Boyer said his company chose to build its own machine as the platform for its artificial intelligence and hardware innovations. But the center recognized that as each ag tech startup has a particular problem it wants to focus on solving, a more collaborative approach could reduce the time spent separately developing general technologies that could be shared.

Enter the Global Harvest Automation Initiative, which Western Growers launched this year. Its objective is to create “tech stack” platforms that will then be available for startups to use when deploying their unique products. Duflock said the kickoff event in Tulare, Calif., in February attracted entrepreneurs from seven countries, and he expects the technologies that result will be deployed around the world.

“We’re going to help get the startups where they need to be,” Duflock said. One big hurdle they face is moving from a successful test product to a commercial rollout. “Part of it is, we’ve got to help (them) get to scale faster.”

Duflock said the combination of the tech stack platform and Western Growers’ deep network in the industry will give the selected startups a head start.

“This is the most relationship-based selling I’ve ever seen in ag,” said Duflock, who joined Western Growers late last year. “I knew that walking in, but it’s been confirmed times 10.” 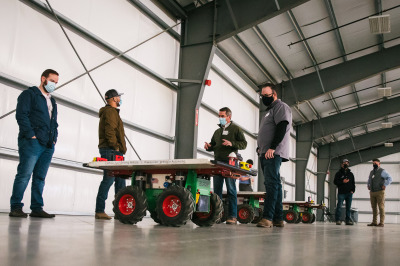 The connections FarmWise nurtured through meeting growers and learning from them throughout the product development phase continue today.

“These were relationships that proved to be extremely crucial for us to succeed,” Boyer said.

Duflock said the entrepreneurs will be connected with “channel partners,” businesses and farm advisers who evaluate new products and make suggestions to operators and growers who’ve gotten too overwhelmed by the steady flow of new technology to keep up with everything coming out. These partners could be critical conduits for new technology adoption and sales.

Western Growers will announce its selection for the first Global Initiative startups in May. The center is contracting with established agribusinesses for engineers and other subject-area specialists to develop the tech stacks. He expects the first iteration of the program’s tech stack, focused on hardware, to be available by midsummer. In another year or two, he said the second version will include systems integration, image libraries, source code repositories, and other features.

Noah Wicks contributed to this story.