“We’ll be helping our farmers, by the way. We have money going out to our farmers in the pretty near future having to do with … you see what’s happened. The farmers got hurt very badly by all of this,” Trump said.

That’s in line with Agriculture Secretary Sonny Perdue saying Wednesday that USDA would release the money, up to $15.5 billion, “sooner rather than later.”

Groups that promote local food systems are making their appeal to USDA for a piece of a $9.5 billion account earmarked for farm assistance provided by the $2 trillion economic stimulus bill known as the CARES Act. That pot of money is specifically earmarked for local ag as well as livestock producers and fruit and vegetable growers.

“Aid for Local and Regional Food System (LRFS) producers should be commensurate with their expected losses of more than $1 billion,” the National Sustainable Agriculture Coalition and other groups say in a letter to USDA. The letter also says that payments “should be prioritized toward small and midsize producers.”

The food industry is talking to senators on both sides of the aisle as it presses its appeal to Congress to provide special assistance to its workers, either through direct payments tax benefits.

“While the work of our public health professionals, first responders, and public safety employees is unquestioned, we must also adequately recognize the service of food industry workers who protect our food security,” Michael Dykes of the International Dairy Foods Association writes in an op-ed for Agri-Pulse.

Industry groups said in an April 3 letter to Congress that “essential critical infrastructure workers are fighting a war against the coronavirus at great personal cost, and these workers should be recognized and supported by the federal government.”

Why it matters: Meatpacking plants in particular are struggling to stay in operation and keep supermarkets stocked as employees succumb to the virus. On Thursday, the United Food and Commercial Workers applauded Smithfield Foods for temporarily closing a Sioux Falls, S.D., plant due to employee illnesses. Operations will be reduced Saturday and suspended entirely on Sunday and Monday.

Sioux Falls Mayor Paul TenHaken said he had a 30-minute call Thursday with Smithfield CEO Ken Sullivan about the plant that was interrupted by a call from Ag Secretary Sonny Perdue. 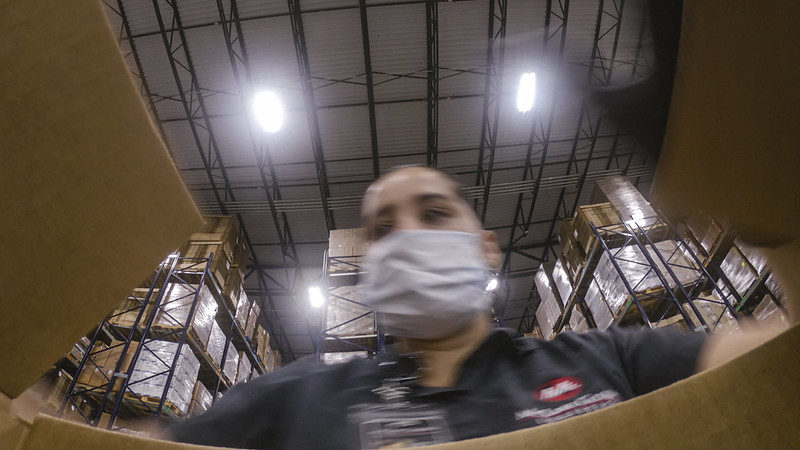 The Consumer Brands Association, which represents major food manufacturers such as General Mills, Conagra and PepsiCo, says federal and state agencies are confiscating thousands of pieces of personal protective equipment, making it hard for companies to provide workers with face masks or make on-site temperature checks.

The organization provided several examples of problems that have occurred. Among them: Thermometers were confiscated at a commercial port, and cloth face masks were seized before they had arrived at a manufacturing plant.

The organization is asking the Trump administration to take steps to address the problem, including by creating a White House Office of Supply Chain to facilitate cross-agency collaboration.

Take note: Clay Detlefsen, a top official with the National Milk Producers Federation and the private-sector chair of the Food and Agricultural Sector Coordinating Council, warns there are likely to be PPE shortages through the summer.

Banks and Farm Credit System institutions are facing overwhelming demand for forgivable loans amid a feud on Capitol Hill over topping up the $349 billion program.

Take note: The Policy Resolution Group, a D.C. lobbying firm, says Congress will have to replenish PPP sooner rather than later: “With $118 billion in loans processed as of (Thursday) morning … an increase will be needed in a matter of weeks, if not days.”

On Thursday, Senate Democrats blocked a Republican effort to add $250 billion to the program, arguing that the measure failed to address other, more urgent needs.

With dairy farmers around the U.S. struggling to find outlets for their milk, some are also wondering why they should still contribute to the dairy checkoff. But the president of Dairy Management Inc. says during this crisis the dairy checkoff is “more important now than ever in its history.”

In a letter to Secretary Perdue, DMI President Barbara Siff O’Brien pointed to the impacts the dairy checkoff was having on all aspects of dairy production and consumption, including working through GENYOUth and others to launch of the COVID-19 Emergency School Nutrition fundraising campaign.

Already more than 5,000 applications have been submitted by school districts across the U.S. requesting up to $3,000 grants for equipment, packaging and other supplies, the letter said.

The checkoff is also convening cooperative leaders eager to find homes for excess supply with local processors and food banks. This effort is already diverting more than 100,000 gallons of milk per week in Texas, New Mexico, Indiana, Michigan, Ohio, New York and New England into the hunger system with more to come.

Now what? High-path bird flu’s back

As if the COVID-19 crisis wasn’t enough, USDA on Thursday confirmed the first case of high-pathogenic bird flu since 2017.

The disease, which was found in a South Carolina turkey flock, devastated commercial poultry operations across the country in 2015.

USDA issued a pair of reports Wednesday that show of the early impact of the COVID-19 crisis. This month’s World Agricultural Supply and Demand Estimates, or WASDE report, reduced the projected corn use for ethanol by 7%, or 375 million bushels. And USDA is likely to lower the estimate again if ethanol plants continue to idle production, says John Newton, chief economist for the American Farm Bureau Federation.

Meanwhile, the Foreign Agricultural Service lowered its forecast for global cotton consumption by 6.4%, or 7.6 million bales. That’s a big hit for growers: About 80% of U.S. cotton crop has to be exported.

Cotton prices have been in free fall since January. The spot price was below 49 cents per pound Wednesday.

The country plans to ban production, importation, exportation, and possession by June 1 of both substances. Chlorpyrifos use has been dropping in the U.S., and major manufacturer Corteva announced earlier this year it is halting production. Paraquat, however, is still widely used, according to the latest data from the U.S. Geological Survey.

He said it. “Our industry’s employees have been deemed an essential part of the effort to keep our country running, yet inconsistent behavior within the federal government is preventing manufacturers from accessing necessary PPE.” – Geoff Freeman, president and CEO of the Consumer Brands Association.