Got protein? Shortages emerge in groceries and retail outlets

Consumer demand for fresh meat, pork and poultry sales is soaring, but as processing remains slowed or shuttered in many places across the U.S., you can expect shortages in some retail outlets as well as many grocery chains.

Meat department dollar sales for the year-to-date through April 26 were up 21.7% from 2019, boosted by double-digit growth for seven weeks running, says Anne-Marie Roerink, president of 210 Analytics LLC. Volume sales for the same period were up 15.9% as volume has been trailing dollars throughout the pandemic.

“Additionally, the gap between volume and dollar sales is widening — signaling significant upward pressure on pricing due to tightness in the supply chain,” notes Roerink.

“Based on the current market changes as well as announced plant closures, sourcing has been challenging, to say the least,” noted Samer Rahman, senior director of meat and seafood for Allegiance Retail Services. “With the news reports on plant closures, customers are under the impression meat will not be available in any form. They were alarmed by these reports and started loading up on fresh and frozen meats."

An additional obstacle in sourcing meat is the reopening of restaurant businesses in multiple states, resulting in foodservice companies coming into the market to purchase their needs. “This dynamic has affected the USDA markets to levels I have never seen before," Rahman added. “I have had to explore additional options, from Australian meats to frozen chicken and burgers to have as an alternate offering to the customers the next few weeks.”

Christine McCracken, executive director of food and agribusiness for Rabobank, says meat processing plants are beginning to reopen, but “labor has been slow to return and volumes remain sharply below year-ago levels.”

“Beef and pork production are both down 35% year-over-year. A handful of chicken and turkey plants closed in the past week, but the impact on total production has been limited. Processors are allocating limited supplies to their bigger customers, leaving smaller, more regional operators with fewer options.”

“Consumers will begin to see noticeable shortages of pork, beef and chicken at retail the first full week of May, as prolonged plant closures and labor-related disruption have cleared fresh meat inventories,” adds McCracken.

McCracken agreed that the recent media attention on meat shortages drove another round of panic buying starting the last week of April and going into May.

“We are already seeing stronger foodservice demand for meat as quarantine measures are lifted and restaurants reopen. The combination of tight supplies and renewed foodservice interest drove beef prices to record highs, up 35% week-over-week,” said McCracken. “The sharp drop in pork volumes and good demand also boosted pork prices, up 23% week-over-week, led by stronger loin values and a recovery in bellies.” 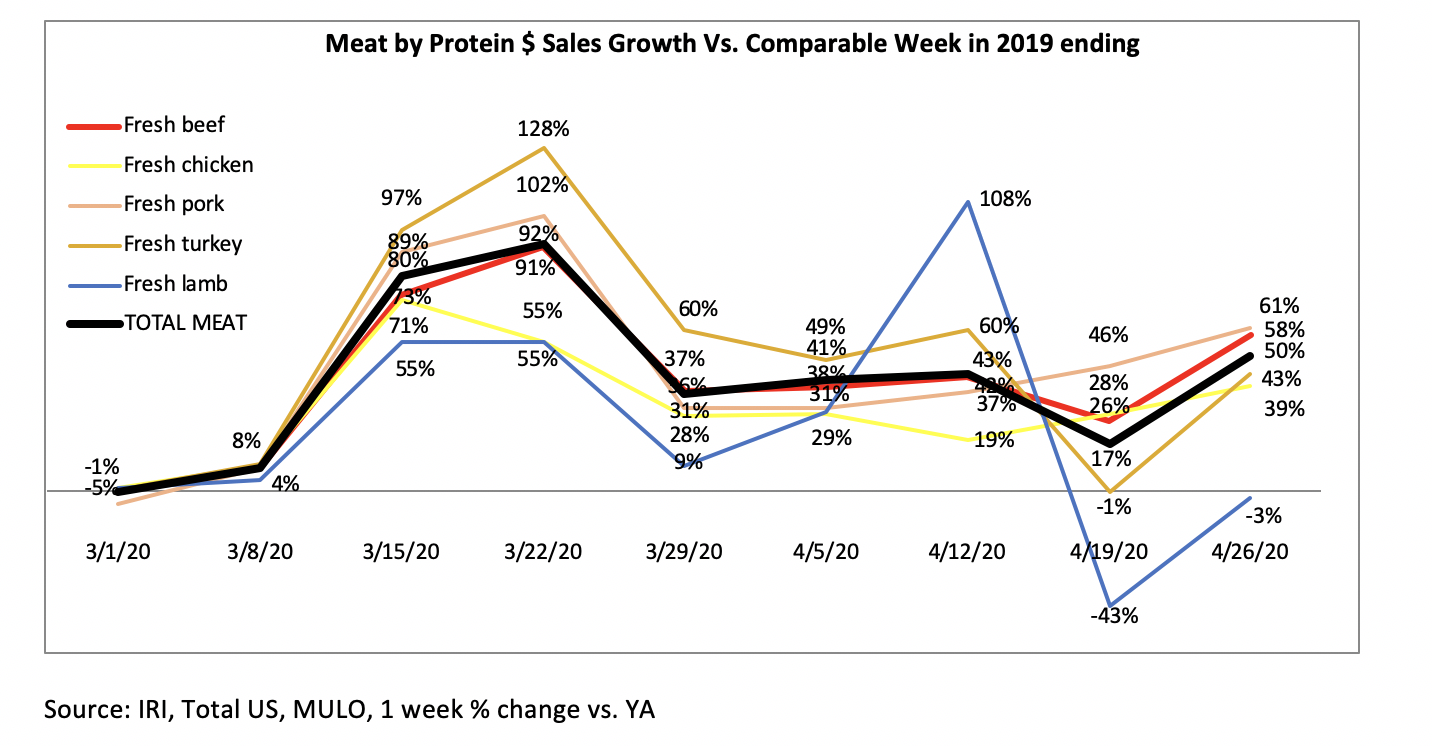 Got vegetable seeds? Consider yourself lucky as home gardens soar
Retail food industry isn't what it used to be, forum told
Plant-based, animal protein demand shows no sign of letting up

Some major retailers, like Sam’s Club, Costco and Kroger, are already limiting the number of meat purchases consumers can make. Wendy’s, a major fast food chain with more than 8,000 locations, is pulling beef from the menu at some of its locations.

Ground proteins continue to be popular due to their versatility and ease of preparation, according to Roerink. Over the week ending April 26 versus the comparable week in 2019:

Lamb sales were affected by Orthodox Easter (April 19 this year versus April 28 last year). The main protein eaten for Orthodox Easter is lamb and this is why the week ending April 26 showed negative growth.

But with limited affordable options, consumers are exploring some unfamiliar cuts and then searching on the internet for recipes and directions on how to prepare them. For example, Canada Beef reported a 77% increase in users over March and an even higher 107% increase for April. A consistent top search item was “how to cook a roast” followed by the recipe section.

Robert Walker, President of the Tennessee Sheep Producers, has seen great success with providing recipes. “We started a Facebook recipe group for lamb that has taken off,” said Walker. “We were not sure what to expect, but engagement has been terrific in terms of clicks, likes and comments.” Shoppers are exploring to bring variety to their kitchens, which is a big opportunity for brands and retailers alike.

Looking ahead, Roerink says, “the reopening of restaurants in these states may provide an indicator of consumers’ mental readiness and economic ability to re-engage with foodservice.

“The widely covered meat shortages in consumer media caused a renewed run on meat the first week of May, which likely means highly elevated numbers in next week’s results as well. For the foreseeable future, it is likely that grocery retailing will continue to capture an above-average share of the food dollar,” she adds.