No Pompeo in Kansas; Can Iowa’s King survive?

We’re getting some new clarity in congressional races that are critical to agriculture policy. The Republican field in the Kansas race to succeed Senate Agriculture Chairman Pat Roberts is now set. Secretary of State Mike Pompeo declined to file for the race. The deadline was noon on Monday.

That leaves Rep. Roger Marshall, who was recently endorsed by the Kansas Farm Bureau, and former Kansas Secretary of State Kris Kobach as the leading GOP candidates. Many Republicans fear they could lose the seat if Kobach wins the August primary.

Today in Iowa: Republicans in Iowa’s sprawling 4th District will decide the fate of embattled Rep. Steve King. State Sen. Randy Feenstra has been running neck and neck with him. Democrats, meanwhile, will choose a challenger to first-term GOP Sen. Joni Ernst.

King was stripped of his senior positions on the House Ag and Judiciary committees last year. But Steffen Schmidt, a political science professor at Iowa State University, says he won’t be surprised if King survives despite facing opposition from the GOP establishment.

Chinese importers are paying significant premiums to forego U.S. soybeans and purchase more expensive Brazilian supplies in a move that’s suspected to be retaliation to President Donald Trump’s plan to punish Beijing for trying to crack down on Hong Kong freedoms.

China purchased as many as 10 cargoes of Brazilian soybeans even though importers had to pay a premium, according to U.S. industry sources. Brazilian soybeans are only $4 per ton more expensive, but freight is significantly cheaper out of the Pacific Northwest, said John Baize, an analyst for the U.S. Soybean Export Council.

Keep in mind: It’s still unclear how private importers will act now, Baize said. There is some concern that Chinese tariffs could go back into place, potentially prodding importers to buy the more expensive soybeans from Brazil.

But there’s also speculation that Chinese importers may be also buying U.S. soybeans for September-October delivery.

Despite rising tensions between the two countries, Chinese importers did make some purchases of U.S. soybeans last week, and Sinograin – a state-owned company – was checking out U.S. prices Monday, Baize said.

The provisions for farmers in that massive House-passed coronavirus relief bill would total $33 billion, according to the Congressional Budget Office’s newly released cost estimates for the measure. That will set a relatively high bar for the Senate to match when it considers its own COVID-19 aid bill.

The provisions in the House’s HEROES Act include $16.5 billion in direct payments to farmers, plus $10 billion that CBO estimates USDA would spend authorizing it to pay for disposal of livestock and poultry that are destroyed because of supply chain disruptions.

The bill’s dairy provisions, which include a dairy donation program and enhancements to the Dairy Margin Coverage program, would cost an estimated $2 billion.

That $33 billion doesn’t include the bill’s food assistance provisions, which are estimated to cost $35 billion over 10 years, primarily because of a 15% increase in Supplemental Nutrition Assistance Program benefits.

Take note: The bill as a whole would increase the federal budget deficit by more than $3.4 trillion. 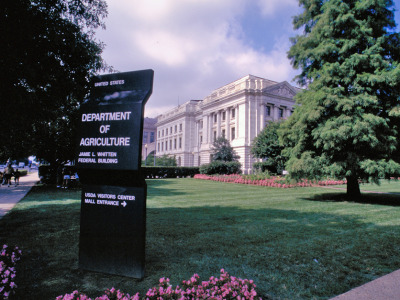 USDA agencies are looking at how to reopen their facilities, based on a department plan that emphasizes cleaning and disinfecting, social distancing, and the use of personal protective equipment.

Decisions to reopen haven’t been made yet, but they should be “informed by whether the state or community in which the facility is located has met the federal gating criteria, begun phased reopening, implemented phased reopening of public and commercial activities, and lifted mandatory travel and closure restrictions,” the May 19 “framework” document says.

The White House’s criteria recommends states or regions experience a “downward trajectory” in COVID-19 cases over a two-week period before beginning phased reopening.

In its own strategy based on the departmental document, the Forest Service said it would be using telework through the three phases of reopening. “It is quite clear that it will be some time before all of our employees are reporting to facilities as they did prior to the beginning of this pandemic,” said Rick Cooksey, the acting USFS national pandemic coordinator.

During the first phase, the USDA plan suggests staggering schedules and says common areas and break rooms should be closed. In addition, no commercial food service or retail vendors will be allowed. “Employees who have self-certified to their higher risk for COVID-19 based on CDC guidelines” can continue to telework. Visitors are “strongly discouraged.”

Pesticide handlers may have to use expired respirators or reuse N95 respirators due to the COVID-19 pandemic, according to temporary guidance issued by EPA Monday.

Addressing the shortage of respirators, the agency said that before considering those options, growers or applicators must exhaust other options, including the use of alternative NIOSH-approved respirators that offer equivalent or greater respiratory protection than those required on the pesticide label.

Growers also should look to hire commercial applicator services that have enough respirators; try to use pesticides that do not require respirators; or delay pesticide applications “until another compliant option is available,” EPA said.

He said it. “I like to be tested under fire.” – Iowa Rep. Steve King, jokingly after a reporter asked him how he would fund a bill to compensate producers for euthanized livestock.

Brought to you by Watkinson Miller and Dairy Management Inc.