Impacts on farm supply and marketing cooperatives from the past three years of agricultural trade upheaval, industry consolidation and four months of a global virus pandemic are as varied as America’s 1,700 or so such co-ops’ enterprises themselves. Some are rethinking their business models to focus on an omnichannel strategy and joint ventures. Many are consolidating to have better scale and capital access.

Producers of major crops are getting squeezed, “and the livestock sector has really been turned on its head, whether you’re talking about dairy … pork … beef … or the feed supplier, says Frayne Olson, a North Dakota State University economist who also heads the university’s Quentin Burdick Center for Cooperatives. “When farm income gets squeezed, farmers put a lot of pressure on their input suppliers … for chemicals, seed, feed … so margins for the input supply side get very, very thin,” Olson says, and “the same thing happens on the marketing side, where farmers say, ‘look, my margins are paper-thin here; you’ve got to give me the best price possible to help keep me in business.’”

This year “has been a struggle for the farmers, no doubt about it,” says Tim Faust, who manages North Star Co-op, a farm supply cooperative in northeast North Dakota. But “the majority of our business is agronomy … (and) across the company you’ve got to say it’s fairly close to normal. Our agronomy side really doesn’t seem to have anything to do with the pandemic. It’s a totally weather-driven thing,” he says.

Like Olson, Mark Biedenfeld, CHS vice president of cooperative resources, salutes the network’s coast-to-coast member co-ops for resiliency. He’s aware of cases where CHS co-ops’ fuel sales plunged earlier this year, “and (there were) pressures on their animal nutrition businesses due to COVID-19 demand and supply-chain disruptions.” But he says the co-ops serviced farmers and ranchers across the U.S. during an unprecedented pandemic and did so with minimal supply and service disruptions. On Tuesday, CHS reported net income of $97.6 million for the third quarter of fiscal year 2020 that ended May 31 — a 78.8% increase compared to $54.6 million in the third quarter of fiscal year 2019.

Long term, U.S. farm co-ops have been doing fairly well economically, even though their ranks are shrinking (see graph) and many of their business models are changing. USDA’s latest Agricultural Cooperative Statistics shows the number of farm supply, service, and marketing cooperatives has shrunk by a third as consolidations continued in the decade ending 2018, and the net result was 17% growth in gross business volume. In the same period, co-op assets swelled 46%.

Farmer-owned cooperatives are facing many of the same pressures as other ag retailers this year, says Allan Gray, director of Purdue’s Center for Food and Agricultural Business and the Land O’Lakes Chair in Food and Agribusiness. But he says “historically, many local cooperatives have a hard time seeing the future. Consolidation is happening where the senior leadership and the board of directors may not have anticipated the rapid nature of the change in the marketplace, while other cooperatives did.”

“A lot of this has to do with the ability to have a vision for the changes occurring in the marketplace, and scale and capital are part of that equation,” he adds.

Some farmers watched as partnerships emerged between co-ops, enabling them to become stronger while maintaining some form of local governance, he notes. “That created some momentum and a little less trepidation among the farmers voting for these mergers.”

The consolidations are particularly evident in Indiana's five remaining co-ops, down from the 150 that existed there more than a decade ago, Gray says. Similar changes are occurring in Michigan and to a lesser extent in Ohio, but not so much in states like Oklahoma, where state laws make co-op mergers difficult, he adds.

Chuck Conner, CEO of the National Council of Farmer Cooperatives, has observed the changes occurring in co-ops since he grew up in Benton County, Indiana — where his family did business at two grain elevators owned by local co-ops. Today, those elevators are not co-ops — they are owned by one family farmer who grows thousands of acres of corn and soybeans.

“As the shape and size of America’s farms and ranches have changed, so too have the farmer co-ops serving them; this is no surprise," he said. "The needs of a farmer with thousands of acres are very different than it was on the small family farm where I grew up.” 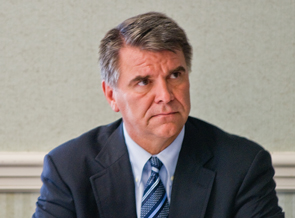 Still, the changing business landscape — with agribusiness consolidation and big farms getting larger — has been difficult for many co-op boards to embrace as they aim to keep serving their customers while maintaining a competitive cost structure.

For example, take Tennessee Farmers Cooperative, which was founded in 1945 by 33 retail co-ops and now has 52 member co-ops and 11 associate members in neighboring states that make up their federated co-op system. Some 70,000 farmer members own and operate their local co-ops as independent businesses, which are guided by local boards, and those member co-ops own TFC. Starting in 2011, TFC and member co-op leaders agreed that structural changes were needed in order to address some of the coming trends in agriculture and to create more buying power. They developed a strategy to become a unified retail cooperative and spent the next several years talking about how to implement the new plan.

"We thought we could create one co-op that would be a $1 billion company," recalls Bart Krisle, TFC's CEO. "But the plan just wasn't palatable because members didn't want to give up local control. The plan went down in flames."

However, in more recent years, he says members realize that some of those projected trends are coming true, and they are watching companies like Nutrien, Helena and Simplot expand and major crop chemical and seed companies merge. "Consolidation is hitting home" and they recognize that "TFC must grow to survive."

So, TFC has embraced a different strategy that involves joint ventures and strategic alliances. One example: Allied Seed LLC, a provider of quality forages, legumes, cover crops, and turf grasses, is equally owned by TFC, Southern States, and Growmark. On Aug. 1, they'll finalize the Faithway Alliance, a 50/50 joint venture with Alabama Farmers Cooperative and Faithway Feeds, which will align their respective hardware, home, lawn, tires, batteries, and accessories departments. In the next week or so, TFC will announce a joint venture with two other agronomy companies, expanding by three times their current size.

On the service side, TFC is helping member coops be more competitive and efficient by offering farm and liability insurance, a health and welfare plan, a 401(k) retirement plan, credit, regional accounting services and shared computer systems. It's an area he expects to expand substantially.

"I'm a firm believer that, if we could work together as co-ops, we would be a lot better off than we would individually," Krisle adds.

That same type of cooperative spirit is at work in Washington, as NCFC works to lessen some of the regulatory burdens on its members.

For example, NCFC recently sent a letter to members of Congress asking them to provide funding relief and address single-employer pension plans in the next COVID-19 legislative package. The House-passed version already includes such changes. The CARES Act included a provision that temporarily delays single-employer funding obligations for 2020 to Jan. 1, 2021.

Many farmer cooperatives in the United States continue to provide single-employer pension plan benefits to their employees, the letter notes. “It has been increasingly challenging to fund those benefits in recent years given historically low interest rates … and escalating Pension Benefit Guaranty Corporation premiums.”

Conner says it is not unusual for some rural co-ops to have 30-, 40- and in some cases 50-year employee celebrations in farm country. “The pension aspect of retaining those employees and keeping them for all those years is a big, big deal.”

Yet, regardless of some help possibly coming from Washington, NDSU's Olson suggests “we are going to continue seeing the consolidations,” and he adds the growth in cooperatives’ business volume and assets means co-ops “are also providing infrastructure, particularly in a lot of rural communities.”

At the same time, he says, the serious disruption to grain and livestock markets, owing to the pandemic and trade conflicts, portend accelerated changes in co-op patronage (membership), with longtime members leaving and new members joining, and that means long-term challenges for the co-ops’ strategy.

Where member incomes have plunged, “there’s implications short-term on the margins (for co-ops),” he says, but that also spells “uncertainly about who are our patron base and what is it that our patron base really needs our co-op to provide.”

Front and center, Olson says, is “availability of labor,” including skilled managers as co-ops expand to offer new and more complex services. To answer the call, “they need a broader set of skills,” he says.

But short term, says John Duchscherer, general manager of River Country Co-op in southeastern Minnesota and eastern Wisconsin, “the biggest concern I see is sub-$3 corn” for the year ahead, assuming the nation emerges from COVID-19. Low grain prices would “have a major impact … on rural America and the farmer,” affecting how farmers can operate and buy co-op supplies and services, he says.