Democrats have watched rural voters drift away for decades, but current and former top officeholders argue some of that lost support can be won back this year by focusing on the ailing farm economy and gaps in health care and broadband.

It will also require spending time in rural areas, the party leaders said during a two-hour online meeting of the Democratic National Convention’s Rural Council on Tuesday.

Kentucky Gov. Andy Beshear said many Americans ”are giving voice to the fact that for the longest time, they rightfully feel like they haven't counted the way that they should.”

Democrats say they are determined to cut into Republican margins in several battleground states — Iowa, Michigan, Wisconsin and Pennsylvania — that President Donald Trump carried in 2016, and they are making some attempts during the virtual convention this week to call attention to rural issues on which they could get traction.

Tuesday’s roll call of the states on the presidential nomination was one way Democrats were trying to do that.

Party Chairman Tom Perez, who also addressed the Rural Council on Tuesday, said he has put a concerted effort into increasing Democrats’ rural support. “We can win, we will win, and we will win on the strength of what we do in rural America,” he said.

He also expressed confidence that Democrats would win a Senate seat in Montana this year because of rural votes. Democratic Gov. Steve Bullock is trying to oust first-term GOP Sen. Steve Daines.

What Perez didn’t mention is he has called for abolishing party caucuses, a direct hit at Iowa’s first-in-the-nation caucuses, which have ensured that rural and agriculture issues receive more attention during presidential campaigns than they likely otherwise would.

During the Rural Council, party office holders didn’t talk about social issues such as abortion that have been a major factor in eroding support for Democrats, focusing instead on issues that they felt would attract rural voters this year. There was no discussion either of regulatory issues that Republicans have used to appeal to farmers and other rural voters, including the now-defunct Obama-era "waters of the United States" rule that expanded the jurisdiction of the Clean Water Act.

Tester said the prolonged slump in commodity prices presented Democrats an opportunity to make inroads with farmers, who polls indicate remain strongly supportive of Trump. “This president is putting the golf ball on the tee for Democrats,” he said. At another point, Tester said Trump has “flushed rural America down the toilet.”

“Take a look at what's going on in the beef industry. Packers are making bank. Small feeders, medium-size feeders, cow-calf operators are going broke. By the way, it's worse now than it's ever, ever, ever been,” he said, adding that the price of wheat on his farm was the same last year as it was in 1978 when he took over the operation.

“So who's making the money? The farmers aren’t.”

Former Agriculture Secretary Mike Espy, who is running against Sen. Cindy Hyde-Smith, R-Miss., this year, said it was critical to expand Medicaid eligibility in Mississippi and other states that have so far refused to do so, using funding provided by the Affordable Care Act. 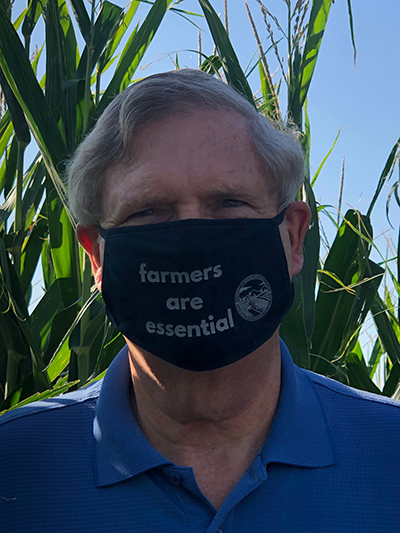 Former Sec. tom Vilsack’s dons a mask sent to many of those participating in the Democratic National Committee’s rural events.

Vilsack, who became president and CEO of the U.S. Dairy Export Council after leaving USDA in 2017, also criticized Trump’s trade war with China.

"You know, it's all well and good to go after China, but when you go after it alone, and you don't have any allies. … when was the last time we went to war without any allies? Well, that's what we did with China,” Vilsack said.

Illinois Rep. Cheri Bustos, who chairs the Democratic Congressional Campaign Committee, echoed that message at a private event, called Leaders of American Agriculture, later Tuesday. She said that Biden "will restore sanity to our trade policy by working with our partners to hold bad actors accountable without sacrificing permanent market share for farmers. Their administration will partner and invest with producers to tackle the real challenge of climate change together. "

First-term Rep. Cindy Axne, D-Iowa, used the Rural Council event to tout a House Democratic plan to spend $100 billion on broadband expansion.  "We have to work to level the playing field to ensure that we don't leave rural businesses, schoolchildren and health services behind” because of gaps in broadband service, she said.

Michigan Sen. Debbie Stabenow, the ranking member on the Senate Agriculture Committee, said that spending time with rural voters will help Democrats break down stereotypes that they have about the party.

“You know it's a lot harder to paint the horns on all of us when you're sitting in somebody's living room or, you know, in the VFW hall, or on the farm," she said.