Partisan tensions reached a tipping in the final night of the legislative session on Monday. While tempers flared in the Senate, an argument quickly escalated over a farmworker bill during a labor committee hearing in the Assembly.

Lawmakers were considering Assembly Bill 685, a measure that would require employers to immediately notify employees and the state of COVID-19 outbreaks in workplaces. The bill specifically focused on clusters of infections among farmworkers.

“Latino immigrants are overrepresented in industries like agriculture, meatpacking plants and poultry plants, like Foster Farms, which we saw over the weekend had almost 400 workers who had COVID. Eight have already passed away,” she said.

An outbreak in June led the Merced County Department of Public Health to advise Foster Farms to conduct widespread testing of its employees, along with other safety measures. Health officials reported in August the testing remained incomplete and the outbreak uncontained, which led to the spike in cases and eventual fatalities, according to a department statement.

Foster Farmers maintained it had promptly implemented public health guidance at the start of the outbreak and performed “a strategic testing program” that ramped up in August following a county directive. The company also claimed the outbreak was driven by the county’s dramatic increase in infection numbers. 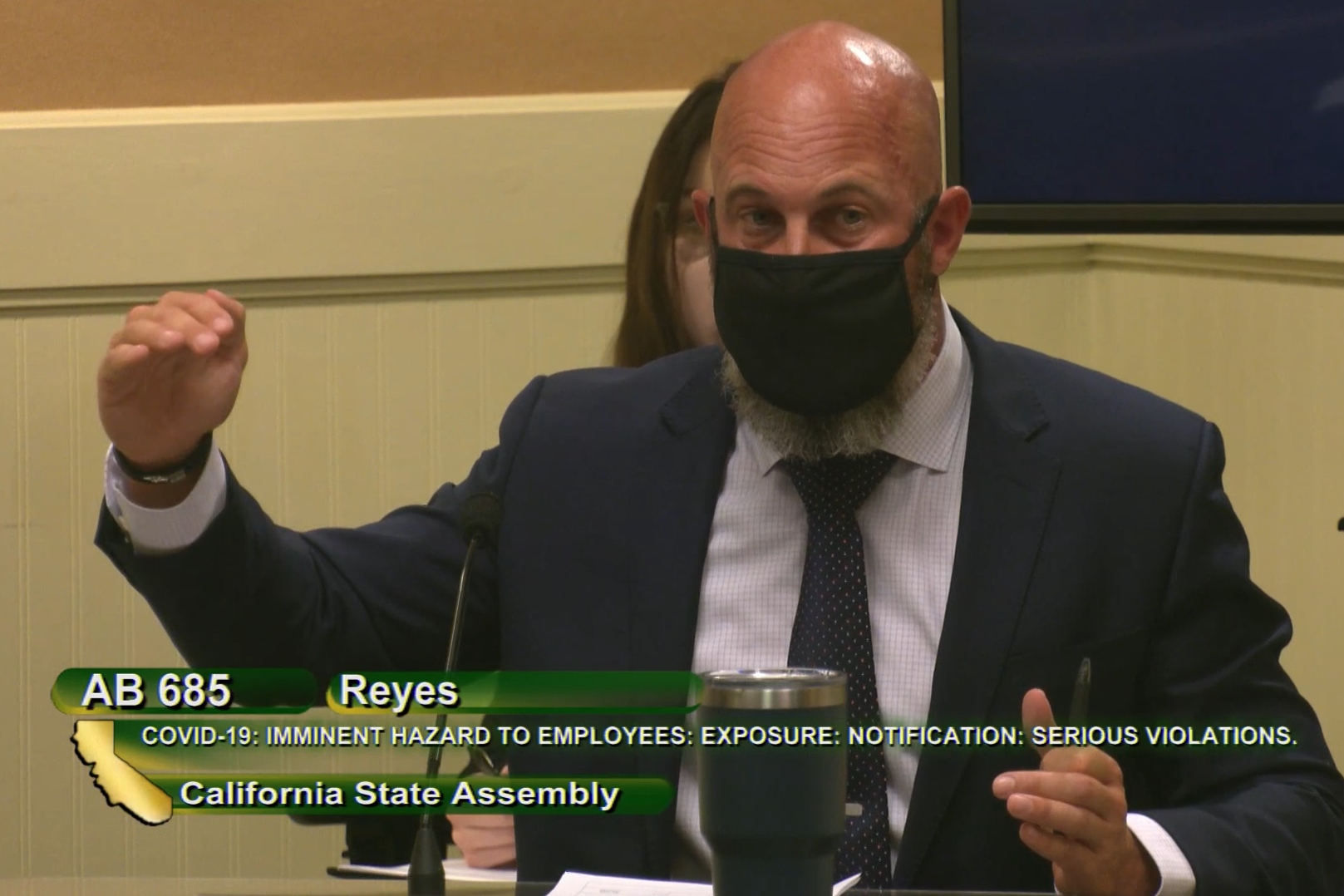 According to Sarah Flocks, a policy advocate for the California Labor Federation, AB 685 would enable local health departments to shut down places like Foster Farms before an outbreak gets out of control.

In opposing the bill, Rob Moultrie, a policy advocate for the California Chamber of Commerce, said making this information public is a form of shaming, which would last long after the infections.

“There will be hanging information online about prior cases, which will potentially result in no one coming in,” he said. “That will kill those businesses.”

Republican Asm. Heath Flora of Ripon defended Foster Farms, calling it one the best and largest employers in his district.

“This is a business that has done pretty much everything they've been asked to do and has far exceeded what the state has mandated,” he said. “This is a failure of the Merced County [Public Health Department] and their inability to get the resources that our businesses need to do the testing that is required for facilities that are this large.”

Lawmakers were holding the business community to a higher standard than the Legislature has held them, he said. Flora was rooming with Sen. Brian Jones when the San Diego County lawmaker tested positive for COVID-19 last week. Flora said he then tried to join other senators in getting tested but was denied.

“This is a huge frustration,” he said. “There is no consistency at the state and local levels.”

Asm. Lorena Gonzalez of San Diego (above) countered that the bill was in the works before the Foster Farms outbreak came to light. Gonzalez, a former labor leader, then gave a fiery rebuttal to Flora about the struggles of Latino workers.

“There were state regulators there in June. They gave them specific instructions on things that could be done. Those were ignored. Eight people are dead—dead—because of that,” she said. “Whether it's a processing facility, or whether it's a family farm, or whether it's a large industrial farm, we are losing our community members because rules are not followed.”

Foster Farms, she argued, ignored the county health department’s request to shut down the plant.

“They did not do so for two days, because they needed to get the harvest out,” she said. “When harvest is more important than the lives of workers that we don't see or hear, something is wrong.”

Gonzalez said companies like this have been putting at risk employees who are unaware of their right to stay home when sick. She added that AB 685 was a priority bill because these outbreaks have been disproportionately affecting the Latino community.

Flora said he largely agreed with Gonzalez over concerns for workers, but maintained that the state needs more accountability as well.

“It all drops back onto the business community,” he said. “When things implode, or things go wrong, they are really in a tough spot.”

Gonzalez, recognizing that Flora does care about workers, asked him to join the Latino Caucus in a letter to the governor demanding more testing for agricultural workers.

The committee went on to pass the bill. It is currently on the governor’s desk.