Farmers should find out next week about a new round of coronavirus relief payments, and there could be some additional aid in the works for farmers hit by natural disasters this summer.

Agriculture Secretary Sonny Perdue told reporters in Iowa Thursday he plans to announce the rules for the payments ahead of next Friday’s deadline for enrolling in the first round of the Coronavirus Food Assistance Program.

USDA doesn’t need to go back to Congress for authority to make additional CFAP payments because the department has plenty of money on hand to make them under its Commodity Credit Corp. authority. But Perdue says USDA will need to get authority from Congress to provide disaster aid, possibly under a new round of last year’s WHIP-plus program.

He told reporters the department is providing lawmakers the information they’ll need in crafting disaster provisions that could be included either in a new COVID aid bill or in a continuing resolution that will be needed to keep the government operating after Oct. 1.

By the way: Perdue confirmed that the CFAP-2 payments would cover producers’ pandemic-related losses from April 15 through the end of the year.

Four Democratic members of the Senate Ag Committee are demanding answers as to why some producers have been left out of CFAP-1.

Many growers “have received conflicting or confusing explanations and are seeking further information as to why they were deemed ineligible – especially given that many have already suffered or continue to suffer economic impacts due to reduced demand from schools, restaurants, farmers markets, processors, and export and retail markets,” the senators say in a letter to Perdue.

The senators, led by Amy Klobuchar of Minnesota, argue that many producers have received “conflicting and confusing” explanations about why they were denied access to CFAP.

EPA Administrator Andrew Wheeler used a speech Thursday to outline the priorities a second Trump administration would pursue when it comes to environmental regulation.

One of EPA’s goals in a second-term Trump administration would be to develop a “holistic” pesticide program, Wheeler said in an address at the Nixon Presidential Library in California. He said the public and the media tend to focus too much on individual pesticide decisions, “which has left the American public uninformed on our science-based process.”

“We will take into account biotech advances and better examinations of new active ingredients,” he said. A proposal released this week, Wheeler said, “would remove onerous and expensive regulation of gene-edited plant protectants.” In addition, he said EPA “will safeguard pollinators to support the agriculture industry.”

Environmental groups have criticized and sued the agency for approving pesticides they say are harmful to pollinators.

Keep in mind: EPA this week proposed a plan to streamline the approval process for crops that are genetically engineered to resist pests. 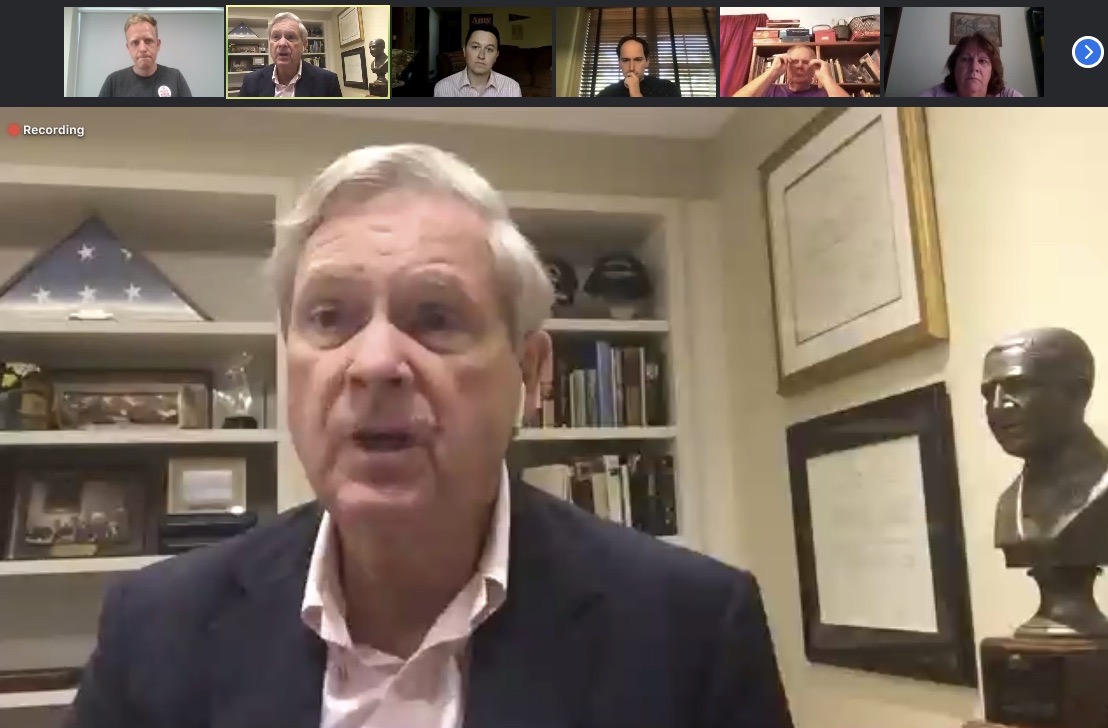 Former Ag Secretary Tom Vilsack on Thursday night kicked off the first of a series of rural phone bank events that the Biden campaign is holding between now and Election Day.

During the online event, Vilsack warned the Biden supporters that big GOP margins in rural areas could more than offset Democratic strength in the suburbs. Thursday night’s phone bank was directed at rural Minnesota, and Vilsack put in a pitch for House Ag Chairman Collin Peterson, who faces a tough re-election race in the 7th District.

Vilsack briefly outlined Biden’s farm policy proposals and attacked President Donald Trump’s handling of the Renewable Fuel Standard. Biden “has stood with farmers as opposed to Trump, who has broken his promises to farmers,” Vilsack said.

Daybreak Sept. 16: Hoeven: Disaster aid will have to wait
Daybreak Sept. 2: Brazil tentatively agrees to quota extension for US ethanol

The nation’s state ag officials are committing themselves to improving diversity and combatting racism in agriculture.

During their annual meeting this week, members of the National Association of State Departments of Agriculture adopted a new policy committing the group to “inclusion, outreach, and engagement to embrace diversity within the agriculture sector and to combat racism in all forms.”

The group also approved a policy supporting the use of rural economic development funding for rural-to-urban ag development projects. Other policies address the importance of specialty crops and support “significant congressional funding and economic incentives to increase U.S. meat and poultry processing capacity and competition.”

Bottom line: The new diversity and inclusion policy says “NASDA believes that the future of agriculture is best served when all of those in the agriculture community are empowered regardless of race, gender, sexual orientation, and/or religious creed.”

State ag officials also are looking for some additional help from Congress to deal with the ongoing impact of the pandemic.

Ryan Quarles, Kentucky’s ag commissioner and the new president of NASDA, said any aid should be “as locally-tailored as possible.”

“We think there’s going to be an increased need for food insecurity efforts heading into the fall and over the winter,” he said. NASDA supported a bill introduced by Sen. Tammy Baldwin, D-Wis., that would give states $1 billion in food and agriculture aid.

US ethanol exports declined in July, but DDGs up

July was a weak month for U.S. ethanol exports, according to a new analysis by the Renewable Fuels Association. Net exports for the month totaled just 63 million gallons, down from 68 million gallons last month and continuing a downward trend as the COVID-19 pandemic spread throughout the globe. Net U.S. exports spiked to 172 million gallons in February, but have continued to steadily fall.

Some foreign ethanol export markets, like Canada, are bucking the trend. U.S. sales to Canada totaled 30.1 million gallons in July, a 10% increase and a high point so far for the year, according to RFA.

And July was a strong month for exports of U.S. distiller’s grains. Exports of the animal feed product reached 1.08 million metric tons for the month – a 23% increase from June and a 30% increase over July last year, RFA said.

Chinese wheat purchases have picked up steam in August, according to new data released Thursday by USDA’s Foreign Agricultural Service. China bought 250,800 metric tons of U.S. wheat in the fourth week of August, pushing the monthly total of purchases to 588,300 tons.

China isn’t normally a major purchaser of hard red winter wheat, but COFCO, a state-owned importer has been buying hundreds of thousands of tons of it, according to U.S. Wheat Associates.

That’s why the group has been working with the company and local millers in recent weeks do demonstrate the benefits of HRW flour as well as blends with hard red spring and soft white wheat to make hamburger buns, baguettes, croissants, pizza dough, noodles and other products.

He said it: “I have the heart of a farmer, as a farm boy. It’s sad, somber, sobering. It’s heartbreaking for the people who put their sweat, blood and tears into the crop to produce it.” – Ag Secretary Sonny Perdue, commenting on the storm damage he saw in Iowa on Thursday.