Why the Legislature pulled broadband bills at the most critical time

As action ramped up in the final days of the legislative session, two bills expanding broadband access fell by the wayside without notice or explanation. Despite widespread support from the Newsom administration and leaders in both houses for a measure to address the issue, an urban senator and a rural assemblymember were unable to find a solution for all stakeholders.

The bills sought to address critical issues in high-speed internet access for both rural and low-income communities, from online schooling to enabling precision agriculture technologies, connecting fairgrounds during emergency operations, expanding telemedicine access and supporting small businesses when so much shopping has moved online during the pandemic.

“We have the number one ag university in the world almost, and we are generating global groundbreaking ag tech,” said Trish Kelly, managing director of the civic nonprofit Valley Vision. “But we can't deploy these technologies in our own region to help farmers compete and save environmental resources and support a rural community without the enabling technology of broadband.”

The measures, Senate Bill 1130 and Assembly Bill 570, would have extended a funding program run by the California Public Utilities Commission (CPUC) for upgrading high-speed internet to rural and low-income regions. The lawmakers hoped the measure would help school children with online learning while schools remain closed during the pandemic. Only 59% of rural homes with school-aged children in California have broadband.

“During this crisis, children are sitting outside Taco Bell so they can access the internet to do their homework,” said Sen. Lena Gonzalez of Long Beach, author of the Senate bill, in a statement. “But the Assembly chose to kill SB 1130, the only viable solution in the state Legislature to help close the digital divide and provide reliable broadband infrastructure for California students, parents, educators and first responders in our communities.”

Gonzalez blamed the leader of the Assembly, Speaker Anthony Rendon of Lakewood, for pulling the bill, calling it “a shortsighted action” that impacts Rendon’s own Los Angeles County communities.

“They deserve better—as do all of the communities throughout California, including our rural and remote areas, who need critical broadband infrastructure investments during wildfire outbreaks,” added Gonzalez.

On the last day of session, she called on Rendon to reverse his decision.

Rendon’s office told Agri-Pulse in a statement that increasing broadband access remains a top priority for the Assembly and the speaker.

“Multiple members of my staff were hard at work on this legislation for weeks,” said Rendon. “Unfortunately, a three-way deal was never reached, and amendments were never adopted."

The bill faced opposition from internet providers for proposing dramatic changes to the California Advanced Services Fund Program, which is scheduled to sunset in 2021. The California Cable & Telecommunications Association (CCTA) argued it would upend efforts to establish broadband infrastructure in remote rural regions, instead upgrading areas that already have service.

Gonzalez argued the fund was delivering grants for internet speeds that were too low. In supporting the bill, Tracy Rhine, a policy advocate for the Rural County Representatives of California, argued the state was subsidizing, “with millions of dollars, technology that will need to be replaced most likely with more public funds.”

Gonzalez said the bill would continue to prioritize rural areas without any service but also expand the definition for what counts as underserved urban and suburban areas.

“There are likely no providers in the state of California that are currently providing service at that symmetrical speed level,” countered CCTA policy advocate Carolyn McIntyre. “Those unserved areas, those rural communities in particular that have been identified, will likely continue to remain at the end of the line and likely not have those networks upgraded.”

McIntyre added that all of the current funding for the program would probably be used for applications already submitted and the bill would not add any new funding for the effort. To this, Gonzalez said the program could collect up to an additional $132 million in fees. She noted that AB 570 proposed to extend the fees further, but recognized paying for broadband beyond this fund would “be a discussion we're going to have for some time to come.”

Assemblymember Cecilia Aguiar-Curry, who represents parts of the Sacramento Valley, said AB 570 complemented Gonzalez’s bill by adding a funding mechanism. She believed the two lawmakers could work together to bridge their differences in approaches. Yet Aguiar-Curry pulled her measure several days before the Legislature would adjourn for the year, indicating that agreement was never found.

AB 570 faced criticism for setting a low bar by going with the federal guideline of what counts as high-speed internet. SB 1130 proposed a much higher upload speed. Gonzalez considered but never took amendments proposed in the Assembly to lower that number.

“Coming up with the speeds to me is not the entire focus of this bill,” said Aguiar-Curry. “We need to remember that it really has a lot to do with the funding. If you don't have the money you can't build.”

She said faster speeds did not mean anything to the members of her district who had no service.

During the negotiations over the measures, fault lines also erupted between the two houses over issues like housing and remote voting for lawmakers.

For Joy Sterling, who has been a longtime advocate for rural broadband as the CEO of Iron Horse Vineyards and a member of the State Board of Food and Agriculture, the failure to pass a measure at such a critical time was deeply disheartening but not surprising.

“I understand that these are trying times and there are those who would argue that, optically, broadband falls down to the bottom of the ladder of what's essential,” she told Agri-Pulse. “To me, broadband is the linchpin for so many of these real crises, and so it's extremely disappointing to me that acrimony between the houses got in the way of governance.” 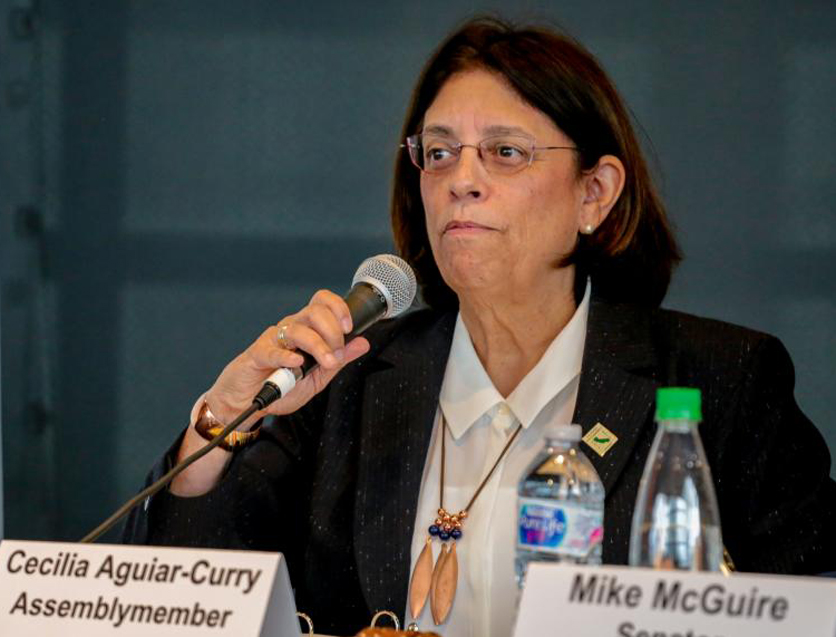 The two bills fell in line with the governor’s Broadband for All initiative launched in 2019 and the efforts of his economic recovery task force. Despite her concerns that recent departures have left rural Californians with little representation in the governor’s office, Sterling pointed out that the governor has selected a point person from his office to spearhead the development of a state broadband plan at the Department of Technology.

“That offers at least the hope of some vision and coordinated effort,” she said, adding that the budget situation has been the dominant concern. “It feels to me that, just like clean drinking water, the two houses and the governor's office should have been able to achieve a compromise funding position.”

Sterling believed the parties were close to resolving their differences before Aguiar-Curry and Rendon pulled the bills.

“I thought we were very close to finally getting broadband to where we need to be,” said Sterling. “It's to me just incomprehensible that the state of California can be lagging so far behind.”

On the national side, the Federal Communications Commission has been advancing a $20 billion funding plan for rural broadband. Congress is also considering authorizing nearly $9 billion to support access for low-income homes during the pandemic. Yet the FCC has been under fire for how it maps the broadband gaps across the country, leaving out large areas of California that do not meet the federal definition of rural.

For now Sterling is focusing her attention on the Legislature’s return to session in January. She hopes the governor’s executive order on broadband and a new state plan will be the impetus needed to drive new legislation, once the heated debate has cooled down.

“We cannot give up on this,” she said. “If we want our state and our agricultural community and our rural communities to thrive, we are going to need to do this.”