EPA Administrator Andrew Wheeler is set today to announce what could be another step in the administration's regulatory reform agenda. He has scheduled a webinar with the Federalist Society, the conservative legal group, to talk about a new rule on guidance procedures.

Guidance documents issued by EPA and other agencies are not legally binding but they clarify how agencies believe regulations should be interpreted and followed.

On Friday, the changes survived a motion for preliminary injunction filed mostly by Southeastern conservation groups.

For more on the NEPA reforms and the rest of this week’s agenda in the nation’s capital check out our Washington Week Ahead.

By the way: Wheeler is dismissing a lawsuit over the Chesapeake Bay cleanup as election-year politics. During a meeting Friday of EPA’s newly revived Farm, Ranch and Rural Communities Advisory Committee, Wheeler accused the groups who have sued the agency of “attacking farmers in Pennsylvania and New York.”

GAO findings on MFP due today

The top Democrat on the Senate Agriculture Committee, Debbie Stabenow of Michigan, will be releasing a report today by the Government Accountability Office on USDA’s handing the Market Facilitation Program. Stabenow has accused USDA of skewing the program to the benefit of southern farmers.

She’ll be joined in an online news conference by Ohio Sen. Sherrod Brown. 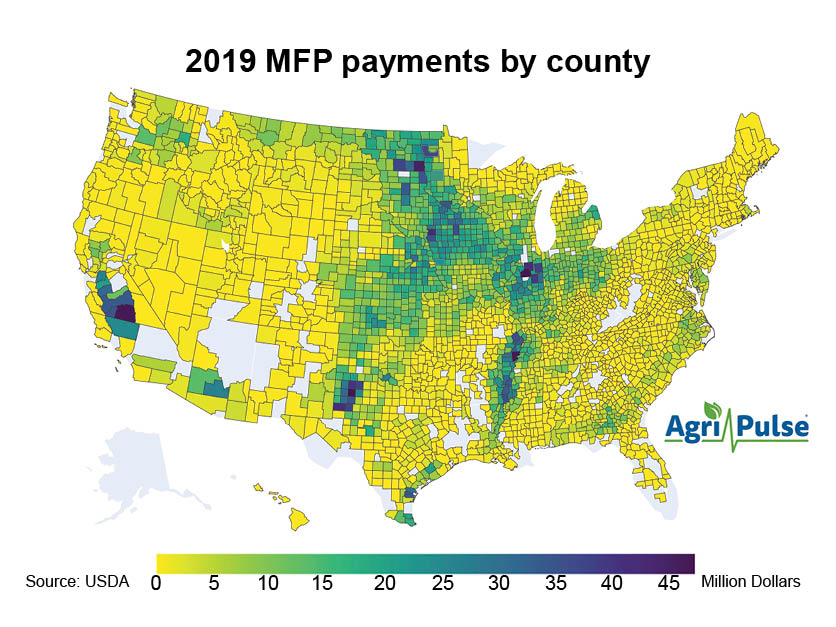 Agri-Pulse map of the 2019 MFP payments

President Donald Trump announced over the weekend that service stations, pending state approval, will be allowed to use conventional gasoline pumps to dispense E15 gasoline.

“Subject only to state approval, our important Ethanol Industry will be allowed to use the 10% Pumps for the 15% BLEND,” Trump tweeted Saturday morning.

But, but, but: A group supporting Democratic candidates, Rural America 2020, dismissed the announcement as election-year politics. “If the president was serious this would have been done already,” said Chris Gibbs, an Ohio farmer and the group’s president.

Why it could matter: Ethanol industry advocates say convincing retailers to install new blender pumps has been a challenge because of the cost.

The U.S. Grains Council, Growth Energy, Renewable Fuels Association and National Corn Growers Association were quick to express dissatisfaction with the Friday announcement of a 90-day revival of a Brazilian tariff rate quota that allows some U.S. ethanol to enter the South American country duty-free.

The TRQ expired Aug. 31 as the two countries continued to negotiate a new deal on ethanol trade. U.S. farm groups and lawmakers continue to demand that Brazil scrap its 20% tariff on U.S. ethanol.

The new short-term TRQ creates uncertainty ahead of what is normally the highest volume time of year for U.S. exports, the industry groups say.

Brazil has been selling its soybeans – especially to China – at a record pace this year and they may have sold too much. Brazil’s livestock industry needs a lot of soybeans, so it’s entirely possible they may turn to the U.S., their biggest competitor, says Mac Marshall, vice president of market intelligence for the United Soybean Board and the U.S. Soybean Export Council.

Reuters is reporting that Guilherme Bastos, president of CONAB, Brazil’s largest agricultural analysis company, said he is advocating that the country lift its 8% tariff on soybeans from countries outside the Mercosur trading bloc, and Marshall thinks that could happen. “It would not shock me,” he said.

The U.K. and Japan have signed off on a trade agreement that promises to cut Japanese tariffs on British pork, beef and other ag products.

The UK-Japan Comprehensive Economic Partnership Agreement is the first trade deal for post-Brexit Britain and the British continue to negotiate with many other nations, including the U.S. The U.S. ag sector is hoping the British will agree to relax EU-style restriction on American beef, pork and poultry. Ted McKinney, USDA’s undersecretary for trade, said he is heartened by the progress being made in the U.S.-U.K. talks.

Meanwhile, British International Trade Secretary Liz Truss says the new pact with Japan opens up the path for the U.K. to join the Trans-Pacific Partnership, a multilateral trade deal the U.S. helped form, but pulled out of in 2017.

USDA analysts have sharply raised the average corn price in the latest World Agricultural Supply and Demand Estimates report. The new prices are closer to the rate that trigger Price Loss Coverage payments for corn, and above the PLC reference price for soybeans.

John Mackey, CEO of Whole Foods, talked to the Wall Street Journal about how the COVID-19 pandemic has changed buying habits, and some of his observations have implications for the supply chain.

“All the animal proteins have increased tremendously, and our prepared foods are way down,” he said.

Mackey also said that some of the pandemic-driven shift toward online food buying is going to be permanent.

He said it. “You’re up and I’m up. We ride together.” – President Donald Trump told Ernst during a phone call Saturday morning, referring to an AARP poll that showed Trump with Ernst with narrow leads in Iowa.