China, the largest export market for U.S. soybeans, is dead set against any talk about the U.S. and Taiwan forging a closer alliance, but that’s not stopping the momentum that’s building between the two countries.

The latest push on this side of the Pacific comes from a bipartisan roster of 50 U.S. senators who say it's time to begin talks on a free trade agreement with Taiwan. The Trans-Pacific Partnership was originally viewed as a vehicle to counter China’s rising influence in Asia, but Republican and Democratic lawmakers now see a Taiwan pact as helping to accomplish the same goal after the U.S. abandoned the TPP.

“This is not only critical for diversifying our supply chains, but essential to reducing our reliance on other countries such as China who seek to leverage supply chain inefficiencies in their path to regional and global dominance,” the senators note in a letter to U.S. Trade Representative Robert Lighthizer. “A free and open Indo-Pacific is a goal that we need to actively work towards by countering China's use of unfair trading practices and other policies to advance its economic dominance in the region. An agreement with Taiwan would help us accomplish this goal by building a network of like-minded governments dedicated to fair competition and open markets free from government manipulation and would serve as a signal to other nations that Taiwan is a viable partner that is open for business.”

And while the U.S. ag sector is largely in favor of any new free trade agreement that would do away with tariff and non-tariff barriers and open up new access for U.S. farm goods, the prospect of further antagonizing China is unnerving. So far, Beijing has not allowed the recent increase in political friction to upset the “phase one” pact, but China’s claim of sovereignty over Taiwan is a major issue.

Just last week, China lashed out at the U.S. after Kelly Craft, the U.S. representative at the United Nations, called for Taiwan to be a permanent member of the international body.

“There is only one China in the world, and Taiwan is an inalienable part of China's territory,” Xinhua, a government-run media outlet said, quoting a federal spokesman. “The government of the People's Republic of China is the sole legitimate government representing the whole China.”

But after China clamped down on Hong Kong, stripping the city of many of its freedoms that separated it from the mainland, Secretary of State Mike Pompeo says the U.S. is keeping a closer eye on Taiwan. 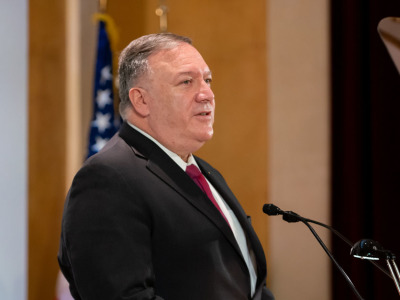 Pompeo, who on Wednesday is wrapping up a three-day trip to Japan to meet with allies in the Indo-Pacific region, blasted the Chinese in an interview with NHK for “refusing to live up to its commitments, the basic commitment it made to the people of Hong Kong that for 50 years they would be permitted to have one country but two systems, to live with some modicum of freedom. The Chinese Communist Party has ripped that asunder. And so we watch what’s taking place in Taiwan.”

The 50 U.S. senators who wrote to Lighthizer last week want to go further than watching.

“As we look to advance our initiative for a free and open Indo-Pacific, we believe that now is the time to establish trade agreements with like-minded countries in the region,” they wrote. “Given their record as a longstanding economic partner and security ally, we highly encourage you to begin the formal process of negotiating a comprehensive trade agreement with Taiwan.”

And Taiwan has already made the first overture. On Aug. 28, Taiwanese President Tsai Ing-wen announced that it will lift key restrictions on U.S. beef and pork. On Jan. 1, the country is scheduled to lift its ban on U.S. beef from cattle under 30 months old at slaughter — a restriction that was based on mad cow disease fears — as well as ditch its zero tolerance for ractopamine residues in pork.

Most U.S. ag groups are not publicly lobbying or advocating for what could be a controversial FTA with a country claimed by China, but there is still a recognition that freer trade is a goal anywhere in the world.

The removal of the beef and pork restrictions would be welcome, says U.S. Meat Export Federation spokesman Joe Schuele, but an FTA would hopefully remove other impediments to trade, such as tariffs. Taiwan maintains a 12.5% tariff on pork cuts and a tariff that ranges between 15% and 40% on pork variety meat. The tariff on U.S. beef is roughly 4%.

Any FTA that opens up more trade is a good thing, says Bill Westman, senior vice president of international affairs for the North American Meat Institute.

“To the extent we can get additional quantities there with lower tariffs, that helps us,” said Westman. “That’s what we strive for. It’s no different with Taiwan.”

Taiwan has a relatively small agricultural sector and wealthy population that is highly dependent on imports. The U.S. is already its largest supplier for soybeans, beef and corn, but the country is also buying more and more U.S. fruit and dairy.

The country also has a strong and growing pork sector that relies on imported grains.

“The U.S. soy industry has worked in the Taiwan market since 1969 with the intent to build relationships and support their soybean import and processing needs — recently we celebrated the 50th anniversary of our partnership,” U.S. Soybean Export Council CEO Jim Sutter tells Agri-Pulse. “With soy foods being a staple of the Taiwanese diet and the need for soy meal for their pork and poultry production, the Taiwan market continues to be a consistent and beneficial market for U.S. soybean farmers. We are proud of the work that we’ve done to achieve a high market share for imported U.S. soybeans in the market. For any of our export markets, free and reciprocal trade is critical to support our soybean industry during these uncertain times.”

And USDA’s Foreign Agricultural Service sees potential for growth in the Taiwanese market.

“Taiwan has one of the world’s wealthiest economies on a per-capita basis,” FAS said in a 2019 analysis. “Its economy is driven primarily by manufacturing of electronic and computer components, with agriculture accounting for only about two percent of Taiwan’s 2017 gross domestic product. Because of its dependence on imported agricultural products, Taiwan is expected to remain a large and growing destination for U.S. exporters.”