San Joaquin Valley water districts are facing an enormous water deficit as the Sustainable Groundwater Management Act curtails pumping over the coming years. This is driving creative approaches to balancing supplies, like partnering with urban cities in Southern California.

In a new report, the Public Policy Institute of California (PPIC) finds these uncommon partnerships could bring more reliability to farmers, bail out cities during droughts and support the governor’s Water Resilience Portfolio. Standing in the way, however, are numerous political, legal and financial complexities.

“The basic idea is not new,” explains PPIC Research Fellow Alvar Escriva-Bou, lead author on the report, in a blog post. “Water partnerships are already being used by California’s urban and agricultural communities to help manage droughts, growing water scarcity and the high cost of water infrastructure.”

The Central Valley cities of Bakersfield, Fresno and Tulare already have partnerships with local agricultural districts. Imperial County irrigation districts have been diversifying their water supply mix through large-scale transfers with urban districts like the Los Angeles and San Diego metropolitan regions. The report notes that urban communities in Southern California have been co-investing in underground storage in the San Joaquin Valley since the 1990s.

Since the early 2000s, these cities have been importing a rising share of water from the Sacramento–San Joaquin Delta to set aside for new water storage investments—and have also achieved “significant drops in urban water demand,” according to the researchers.

In advancing long-term resilience goals, Los Angeles Mayor Eric Garcetti last year unveiled a plan to locally source 70% of the city’s water supply by 2035, and other cities have enacted similar policies. This creates more water reliability for the city during dry years and reduces the political and legal risks related to Delta deliveries. Yet the recent drought showed Southern California will need to plan ahead for more extreme dry periods. 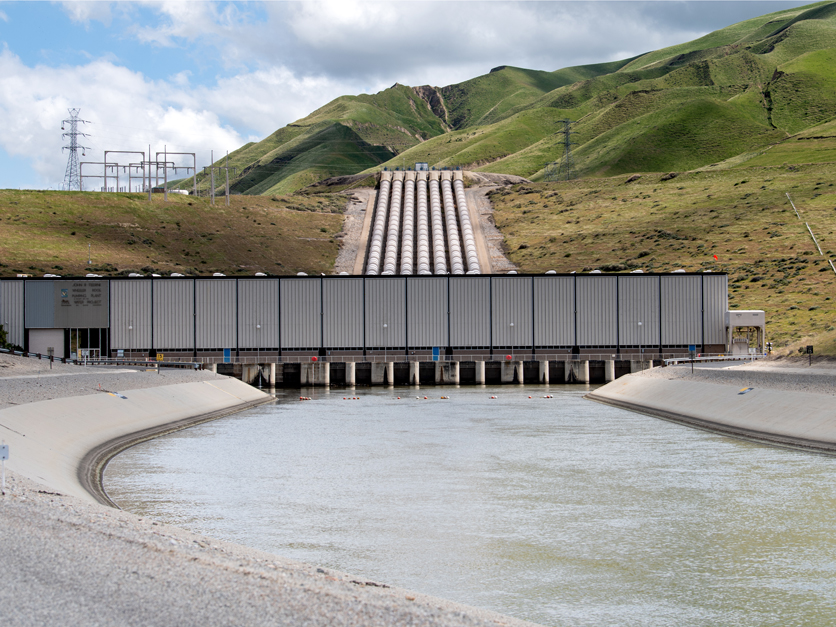 A pumping plant along the California Aqueduct. Courtesy Department of Water Resources

The San Joaquin Valley, meanwhile, has been grappling with the threat of up to a million acres of farmland being fallowed under SGMA, with socioeconomic impacts reverberating throughout some of the state’s most disadvantaged communities. Climate change adds more uncertainty. Delta imports to the valley are expected to shrink by up to 10% by 2050, while runoff feeding into the Colorado River Basin—a vital resource for Southern California cities and farmers—will decline by as much as 30%.

To counter the loss and expand supplies, the most promising option is groundwater recharge, PPIC researchers have found. Another is for state and federal agencies to adopt more flexible operations for managing surface and underground storage. Partnerships between the valley and Southern California cities would supplement those options, using existing resources.

Kern County has the state’s largest water bank at hand, and several others are spread throughout the valley.

“Most of these banks have a ‘leave-behind’ rule—a proportion of the water put in storage that may serve to pay for operating the bank,” noted Escriva-Bou. “That also increases water availability in the local basin.”

The arrangement would generate local revenues that could be used to build water infrastructure and offset water shortages. In a meeting with farm appraisers last Thursday, California Farm Bureau Federation President Jamie Johansson pointed out that his Butte County water district has relied on revenues from water exports to support the local water infrastructure.

“We're not a big enough district to afford the overhead that comes with relicensing and maintaining those dams,” he said. “We have to be able to move and sell that water.”

Johansson argued that the state could not move water through the Delta efficiently before the Trump administration approved new biological opinions for governing pumping operations. Escriva-Bou and his team acknowledged that regulatory constraints like this can limit the ability to move water during dry years and curtail groundwater recharge efforts. This could put agricultural districts in the position of being unable to fulfill delivery obligations for Southern California.

As far as infrastructure and regulations, storage sites would need to be connected to the California Aqueduct and the State Water Contractors would have to loosen their rules for transfers and exchanges out of basins. State and federal agencies would have to adjust their “place of use” restrictions for water coming from the State Water Project or Central Valley Project.

A reliable water accounting system would address some of these issues. According to the researchers, this is already being implemented in response to SGMA and could offer legal accountability for water exchanges.

Since agricultural districts often lack the capital to invest in the needed infrastructure for storage and transfers, the report notes, the state could step in and offer financial assistance through the California Infrastructure Economic Development Bank. In his January budget proposal, Newsom pitched the idea of offering low-interest loans for climate resilience water projects through the I-Bank, as it is known. The measure resurfaced briefly in the Legislature later and is likely to return once the state budget deficit is resolved.

The cap-and-trade market adds another opportunity for cost reductions. California’s energy-intensive water system accounts for 10% of the state’s total greenhouse gas emissions, with the State Water Project being the largest single consumer of electricity. Reducing the amount of transfers to Southern California would reduce emissions and the cost of carbon offsets. The PPIC report finds, however, that significant emissions reductions can only be achieved when water conservation is a top priority in the partnerships. The Air Resources Board would also have to follow through on lowering the cap on emissions, which would raise the price for carbon offsets.

While partnerships between districts in the San Joaquin Valley and Southern California may not be a win for everyone, the approach presents a more accessible option for addressing water shortages when Congress has delayed action on infrastructure funding and the state has shot down measures for financing canal repairs and maintenance.