California’s success with dairy emissions is a model for the world, say UC Davis experts

California’s strict goals for reducing methane emissions from dairies, when combined with incentive grants, has led to early successes and should serve as a model for the rest of world for rapidly cutting greenhouse gas emissions, according to UC Davis professors.

“We did a calculation to see what happens if the world were to follow California's lead,” said Ermias Kebreab, a professor in sustainable agriculture, during the California Dairy Sustainability Summit last Thursday. “We came up with an estimate of about a 1.73% reduction in total global greenhouse gas emissions. This is quite remarkable.”

Kebreab added that this is a very conservative estimate since it applies 2014 data and does not reflect the progress made since then. Senate Bill 1383 in 2016 set a goal of reducing short-lived pollutants by 40% of 2013 levels. Since that time, the state has already slashed manure methane emissions by 25%. Kebreab pointed out that the industry over decades has gained new efficiencies in milk production and adopted practices that have significantly reduced emissions per head of cattle, especially when compared to developing countries.

While California leads the nation in dairy sales, the greenhouse gas emissions from dairies account for just 4% of the state’s total, with fossil fuels contributing 80%.

“California has done a lot of work in the last 50 years, but I think the next 5 to 10 years is going to be even more exciting,” he said. “We have some tools that will help us drastically reduce those emissions.”

UC Davis air quality specialist Frank Mitloehner cautioned that biological methane behaves much differently from carbon dioxide in how it influences global warming. Because of that, it is often calculated inappropriately as a stock gas. 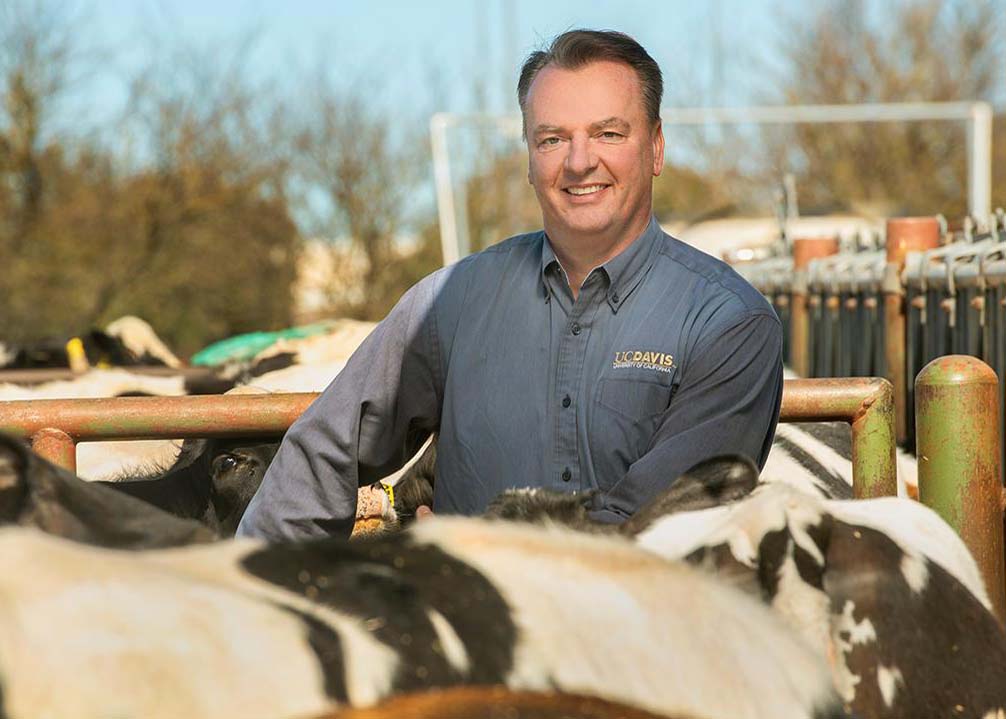 “Methane is killed in a fairly short period of time,” he said. “If we reduce methane from dairies, for example, then that has an immediate impact on warming.”

And limiting the amount of climate warming directly addresses the goals of the Paris climate agreement, he said.

In a recent white paper, Kebreab and Mitloehner, along with Dairy Cares CEO Michael Boccadoro, describe how emissions from more than 12 years ago have already broken down and disappeared, leading to an exponential decline as the industry moves to greener practices. This means the sector is within reach of climate neutrality—which Mitloehner argued should be the goalpost rather than carbon neutrality. In reducing carbon dioxide, warming still continues to rise until the world achieves absolute net zero emissions.

“I'm very optimistic to turn this liability of methane into an asset by not viewing it as a big problem but viewing it as a significant opportunity for the dairy sector to do something that's right for the environment,” said Mitloehner. “It is actually, in my opinion, not a super pollutant but a super opportunity.”

He attributed the success to several factors. For one, CDFA, the Air Resources Board and the California Energy Commission over the years worked collaboratively across silos on the methane reduction goal. The dairy sector “has been quite amazing” as a financial partner as well. More than $1 billion has been invested into installing more than 230 dairy digesters across the state to capture methane, with the private sector contributing a two-to-one match, according to Boccadoro.

Is California falling behind in cutting dairy emissions? CARB is winding up its regulatory gears just in case
UC Davis sets the record straight on cow methane

CARB Executive Officer Richard Corey said California had only a dozen digesters five years ago. He estimated about $300 million has flowed into state incentives dollars in recent years. Corey emphasized that other significant factors were changes in operations and the revenue stream that has sustained the economic value for the methane. Dairies have sold the captured methane as natural gas and coordinated operations to more easily pipe it into existing infrastructure.

Kebreab’s research into food additives for dairy cows has shown that more tools on the near horizon will further reduce the enteric form of methane, which is released through digestion. Some products are already moving through the special FDA approval process for these additives.

“I would think in the next two years or so a couple of those food additives may get approval and will be available for the farmers,” he said.

He and others stressed that governments should incentivize farmers for these activities. Kebreab said CARB could approve protocol through its cap-and-trade program to credit farmers for cutting greenhouse gases.

“You would reward people for reducing methane emissions, in exactly the same way that we reward farmers for forestry, where they're taking carbon dioxide back out of the atmosphere,” said University of Oxford Professor Myles Allen, an expert on climate physics. “Many countries pay farmers to do that.”

Allen warned that the flip side, however, would be disincentivizing, or penalizing, farmers who increase methane emissions.

Mitloehner added that incentive grants for anaerobic digesters and reducing enteric emissions “make all the sense in the world.”

“It is mind boggling how cost-effective climate mitigation is when applied to the sector,” he said. “It's also liability. We do not want to go in the wrong direction of increasing it. We want to decrease it and continue on that path of further reduction.”