Senate Agriculture Committee Chairman Pat Roberts has been involved in just about every consequential piece of agricultural legislation in the last four decades. But the bill he thinks may have the most lasting impact is the 1996 farm bill known as Freedom to Farm (or “Freedom to Fail” by its detractors). The bill formally ended the system of production controls and commodity subsidies first imposed during the Depression.

Since Roberts is retiring, we asked him what bill he was involved with that would still have the biggest impact 10 years from now. He quickly brought up the 1996 farm bill. “We still have the freedom to farm. It’s surprising that it’s lasted this long,” he said.

He went on to lament that there had been “some talks about set-aside” during negotiations on coronavirus relief assistance. That was a clear reference to a provision in a House-passed bill to expand the Soil Health and Income Protection Program, which was created as a small regional pilot in the 2018 farm bill.

“That’s so terribly counterproductive. It just doesn’t make any sense. … Why would you go and set aside part of your operation, thereby giving that acreage and that crop to a foreign country and one of our competitors. Because they always grow more when there is a set-aside,” Roberts said.

Keep in mind: Economists at Ohio State University and the University of Illinois argued in an analysis this summer that a set-aside program would likely be counterproductive because foreign competitors could increase production to offset a cut in U.S. output.

Don’t miss: Colin Woodall, CEO of the National Cattlemen’s Beef Association, is this weeks’ guest on Agri-Pulse Open Mic. Among other issues, he talks about the impact of the COVID-19 impact on the U.S. beef industry.

In the third installment of our five-part series on the sustainability challenges facing U.S. agriculture, we look at the prospects for carbon markets. The going price for ag carbon so far appears to be about $15 a ton, well below where it needs to be, according to one of the world’s top soil scientists. We also look at how a USDA carbon bank would work and how it would affect private markets.

Part Three of “Agriculture’s sustainable future: Feeding more while using less” will be available this afternoon at Agri-Pulse.com.

The new chairman of the conservative House Republican Study Committee says President-elect Joe Biden will be a lame duck from day one and predicts House Speaker Nancy Pelosi will be unable to get much done in the House.

Rep. Jim Banks, R-Ind., told congressional pool reporters he expects Trump’s populist approach to shape GOP priorities for “some time to come.” “The Trump agenda is a winning agenda with a broad populist appeal,” he said.

Banks thinks Democrats face “a constant food fight” between Pelosi and the “squad,” a small group of liberal members including New York Democrat Alexandria Ocasio-Cortez. And that will lead to “a complete breakdown with little progress on Capitol Hill that will just add to the recipe that's going to take Republicans to win back the majority in 2022,” he predicted.

Bottom line: There’s no question that moving legislation through Congress is going to be enormously challenging for Pelosi and Biden. As it stands now, Democrats have won just 222 seats in the House, four more than the 218 needed for control. Eight races remain uncalled, and Republicans are leading in the count in all of them. Meanwhile, control of the Senate hinges on the two upcoming Georgia runoff races. 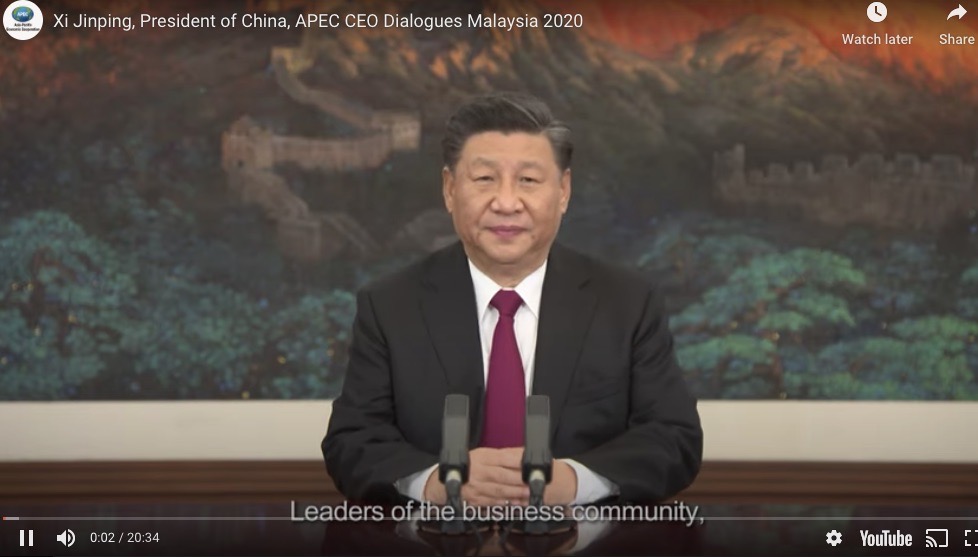 China’s demand for domestic and imported goods will only continue to grow as the country commits to increasing its presence on the global stage, Chinese President Xi Jinping said at a gathering of the Asia-Pacific Economic Cooperation organization.

The comments come shortly after China last week signed onto what will be the world’s largest trade pact with 14 other countries representing 30% of global GDP. Xi’s speech also comes with no end in sight to its trade war with the U.S.

Xi did not mention the U.S. or other countries by name in the speech, saying “mounting unilateralism, protectionism and bullying as well as backlash against economic globalization have added risks and uncertainties in the world economy.”

A new study of COVID-19 at meat processing plants suggests that they pose a special risk for spreading the virus into local communities.

“Ensuring both public health and robust essential supply chains may require an increase in meatpacking oversight and potentially a shift toward more decentralized, smaller-scale meat production,” says the study, authored by researchers from Columbia University’s School of International and Public Affairs and the University of Chicago’s Booth School of Business. It was published in the Proceedings of the National Academy of Sciences.

Results of their analysis “indicate a strong positive relationship” between the plants and local community transmission of COVID-19, suggesting the plants may act as “transmission vectors” into the surrounding areas, the study says.

Keep in mind: There has been renewed interest in Congress in expanding meatpacking capacity primarily by helping smaller plants get approved to sell across state lines. Whether that happens remains to be seen, and interest could wane once the COVID-19 crisis abates.

A new report from the Government Accountability Office says the Centers for Disease Control and Prevention should do a better job at managing and responding to multi-state disease outbreaks of food-borne illness.

GAO, the nonpartisan investigative arm of Congress, recommends the CDC implement all elements of a performance assessment system to better meet its goals and identify weaknesses.

He said it. “I imagine he will continue to play a role in or out of the White House.” - Rep. Jim Banks, the new chairman of the Republican Study Committee, on President Trump.