Farm groups count on Biden to reengage with Cuba

President-elect Joe Biden promised on the campaign trail to reverse the Trump administration’s policy of breaking ties with Cuba, and that has U.S. farm groups once again hoping their farmers will benefit with increased trade.

Cuba, despite all of the trade and travel restrictions imposed by the U.S., remains the fourth largest foreign market for U.S. poultry, and the American ag sector wants to see the island nation return to making large purchases of rice, wheat, corn and soybeans. It started to look like that might be possible toward the end of the Obama administration, as the two countries reforged ties and encouraged travel, but that came to a halt in 2017.

“We need a new Cuba policy,” Biden said this summer during a campaign swing through Florida. “The (Trump) administration’s approach is not working. Cuba is no closer to freedom and democracy than it was four years ago.”

Although there were no major Cuba trade breakthroughs during the years that Obama and Biden were in the White House, momentum was building towards that goal, says Doug Keesling, a farmer, business owner and member of the Kansas Wheat Commission. “I see a new administration and it’s a new day. … We’re putting new seed in the ground with a new administration, looking for a good harvest.”

Biden stoked that optimism on the campaign trail this year, telling CBS Miami in an interview that he intends to go back to the Obama policy of strengthening ties with Cuba.

“What we did when we changed the policy — we began to open up and get so much more support from the region and that’s what we should be doing right now,” Biden said. “There’s no reason to continue the policy that Trump has put in place.”

While Biden's comments on the campaign trail may have boosted those hoping for a better trading relationship with Cuba, voters in South Florida also reacted to the idea. There, President Donald Trump outperformed some expectations and Republicans were also able to flip a Miami-area congressional seat.

Cuba imports about $2 billion worth of ag commodities per year, and the U.S. — which lies only about 100 miles to the north of the island nation — supplies only about 10% of that demand, says Paul Johnson, president of the U.S. Agriculture Coalition for Cuba (USACC).

“It’s exciting times right now,” Keesling told Agri-Pulse about the potential of regaining a share of the Cuban market.

Cuba imports about 30 million bushels of wheat every year, and the U.S. Wheat Associates — a member of the USACC — says it should be buying most, or all, of it from the U.S. because of the proximity between buyers and sellers. But Cuba hasn’t bought any U.S. wheat since 2011, importing instead from Europe and Canada.

“The United States has a natural advantage in that region, with an 80% share of the wheat market over the past decade,” according to an analysis by USW. “In the nearby Dominican Republic, U.S. wheat typically has a market share of over 90%.”

U.S. rice farmers also have a lot to gain from getting back into the Cuban market, where they once sold tens of millions of dollars of the grain.

“It has been USA Rice’s long-standing policy that we support restoration of normal commercial trade and travel between the United States and Cuba, and we look forward to working with the Biden Administration and the 117th Congress to restore this once thriving market for U.S. grown rice,” USA Rice Federation President Betsy Ward told Agri-Pulse.

The U.S. sold $64 million worth of rice to Cuba in 2004, but the totals have declined since then, reaching zero in 2009. There were some relatively small shipments in 2012 and 2017, but nowhere near previous levels. 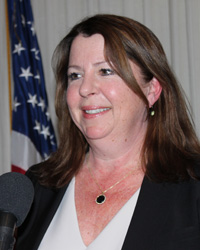 There are plenty of Trump’s restrictions that Biden will be able to peel back almost immediately, including travel restrictions such as the one enacted in September that prohibits Americans from staying in most of the hotels in Cuba.

“Today, as part of our continuing fight against communist oppression, I am announcing that the Treasury Department will prohibit U.S. travelers from staying at properties owned by the Cuban government,” Trump announced in a September speech. He also announced restrictions on bringing back tobacco and alcohol from Cuba.

Repealing travel and other restrictions would be a good start and it’s what the coalition is calling for, but the key change in policy for ag trade will need congressional action.

It was the Trade Sanctions Reform and Export Enhancement Act of 2000 that allowed the U.S. to export farm commodities to Cuba, but it also requires Cubans to pay cash in advance for U.S. rice, corn, wheat and other commodities. The Treasury Department tightened those payment provisions further in 2005, requiring U.S. sellers be paid even before the shipment leaves the U.S. port.

All of this makes the U.S. less competitive, especially when government-subsidized exporters in countries like Vietnam or Thailand offer multi-year financing.

“We’re not asking for public money,” USACC's Johnson said. “We’re asking for individuals and companies to be able to take the risk of repayment of debt.”

Steve Mercer, a spokesman for the U.S. Wheat Associates, says the ability to offer credit to Cubans will be key.

“Other people are offering credit, which for a country that doesn’t have access to a lot of U.S. dollars – that’s a huge thing.”

But for now, Johnson says he’s just hoping the incoming Biden administration will undo the complications to trade with Cuba that the Trump administration set. At a minimum, Johnson said he expects the harsh anti-Cuba rhetoric to stop flowing from the White House.

“U.S. wheat growers would be very happy to see diplomatic relations renewed with Cuba and the renewal of the opportunity to once again share our wheat with the Cuban people,” Mercer said.