In a new report, the San Joaquin Valley Air District has released its latest recommendations for reducing agricultural burning to improve air quality.

The amount of acreage allowed for burning rice stubble would drop from 70% to 25% under the recommendations. Burning weeds along levees and banks would still be allowed, along with prunings for apples, pears and quince fruit. The report also recommends tightening the parameters for burning tree nut prunings and removals from citrus orchards and vineyards.

Remember: The district reviews and refines the policies every five years in a report to the Air Resources Board. Many members of the board favor a complete and immediate ban on all burning. The industry has been racing to develop feasible alternatives for several crops that have been allowed exemptions to the current burning prohibitions. 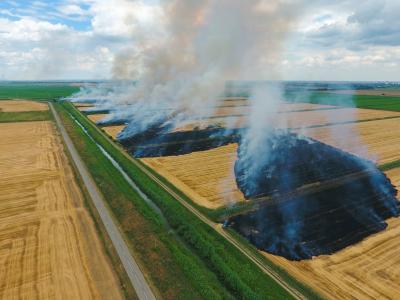 Judge was biased in Imperial case on farm water rights

Farmer Michael Abatti spent years litigating the Imperial Irrigation District (IID) over how it limited his water supply during a drought shortage. In 2017 a county court judge ruled in favor of Abatti. That decision was largely reversed this past summer.

Now IID has won a ruling to disqualify that county judge from the case. IID Board President Norma Galindo said this “affirms the belief that this judge demonstrated a bias” against the district. The ruling will likely lead to Abatti having to cover millions of dollars in costs and attorney fees going back to 2013.

Aquaponic producers are fighting a lawsuit that seeks to revoke organic certification for hydroponic operations because they don’t grow food in soil.

“Aquaponics is a food production method integrating fish and plants in a closed, soil-less system,” the group said in a Nov. 23 statement signed by dozens of other groups. “This symbiotic relationship mimics the biological cycles found in nature.”

The association, along with the Coalition for Sustainable Organics, Western Growers Association, and The Scotts Co., has asked to participate as a friend of the court in the lawsuit in California, which is led by the Center for Food Safety.

“Numerous studies demonstrate that organic hydroponic growers are able to establish the same quantity and diversity of microbiology — a fundamental component of organic agriculture — found in in-soil production methods,” their brief says.

More than 90% of endangered species are “likely to be adversely affected” by use of glyphosate, but mostly through non-agricultural uses, the Environmental Protection Agency concluded in a draft biological evaluation of the impacts of the herbicide released Wednesday.

The evaluation was conducted to comply with the Endangered Species Act, which prohibits federal agencies from engaging in actions likely to “jeopardize the continued existence” of threatened or endangered species. EPA is asking for public comments on the evaluation for 60 days.

Once EPA analyzes the comments it receives, it will issue a final BE determining whether use of glyphosate — commonly sold under the brand name Roundup — “may affect” ESA-listed listed species or their critical habitats. If so, it will have to consult with the Fish and Wildlife Service and National Marine Fisheries, which will prepare their own evaluations identifying ways to ameliorate those impacts, including possible restrictions.

Congress returns to Washington with government funding top of mind

The House and Senate are both heading back to Capitol Hill this week as a partial government shutdown looms at the end of next week.

A continuing resolution that expires next Friday is currently funding the government, giving lawmakers the next two weeks to either pass another stopgap measure or an omnibus package to last the rest of the fiscal year.

One bright spot? Agri-Pulse is told House and Senate leaders have agreed on spending caps for the 12 individual appropriations bills that are expected to make up the omnibus.

Read more on the days to come in our Washington Week Ahead on Agri-Pulse.com.

Rural broadband advocates are urging the incoming Biden administration to prioritize improving the maps used to identify gaps in high-speed internet service around the country.

Shirley Bloomfield, CEO of NTCA – The Rural Broadband Association, says the country could do a better job understanding where coverage is rather than just relying on carriers doing self-reporting.

“We need to know where the broadband is, what speeds are available, and we need to target these resources to those areas where they are unavailable or low speeds,” Bloomfield told Agri-Pulse.

Agriculture Secretary Sonny Perdue is among the critics of the existing coverage maps, referring to them once as “fake news.”

Don’t miss Part 4 of our series, “Agriculture’s sustainable future: Feeding more while using less,” which posts at Agri-Pulse.com today. This week we look at the potential for various types of technology – from new biologicals to feed additives and vertical farming – to help farmers produce the food the world wants and needs while reducing U.S. ag’s environmental impact.

Marty Matlock, a University of Arkansas professor who advises sustainability programs for numerous farm commodities, is excited about the potential of nitrogen-fixing microbial products to slash the carbon footprint of animal feed and the pork and poultry that it’s used to produce.

South Dakota GOP Rep. Dusty Johnson says the key to addressing climate change in a way that’s economical is to promote innovation rather than relying on what he calls the “economics of scarcity,” or requiring Americans to make do with fewer resources.

Take note: Johnson, who's the ranking Republican on the House Ag Committee’s subcommittee on USDA oversight and nutrition, appears to have a favorite for the next agriculture secretary: former North Dakota Sen. Heidi Heitkamp. Johnson says the ag secretary needs to understand agriculture sector as well as nutrition programs and other responsibilities of USDA. Heitkamp “underhands all sides of this equation in a way that many other candidates don’t.”

Johnson also says he’s going to press the Biden administration to make sure China doesn’t backtrack on the changes it made in trade regulations and policy as part of the phase one agreement. “If they try to be kind to China, that kindness is going to be mistaken for weakness, and we’ll be taken advantage of. We have to hold the line there,” he said.

“We can’t let the regulatory process take longer than it takes to actually build the infrastructure.” — Mike Wade, executive director of the California Farm Water Coalition, in an op-ed for Fox and Hounds urging policies to help farmers adapt to climate extremes.