The Assembly and Senate swore in lawmakers for the first day of session on Monday. While a few legislators were allowed to be sworn in remotely, most traveled to Sacramento to attend in person, which is required under the state’s constitution. The Senate convened in the Capitol while the Assembly took over the Sacramento Kings arena to allow more room for social distancing.

“State regulators continue to push the costs associated with COVID-19 onto employers,” he said in a statement. “Voters soundly rejected this kind of government overreach when they defeated Prop. 15. But recently adopted Cal/OSHA regulations double-down on such schemes.”

On the other side, Los Angeles Sen. Henry Stern has a bill that would require employers to implement contact tracing programs.

Meanwhile, Republican Sen. Andreas Borgeas introduced a bill that would expand rural broadband access. Three Democratic assemblymembers introduced yet another broadband bill, which proposes a bond measure of up to $10 million to fund the needed infrastructure.

Other legislation focuses on the public health crisis, economic recovery, wildfires and housing. The houses return to floor sessions on January 4. 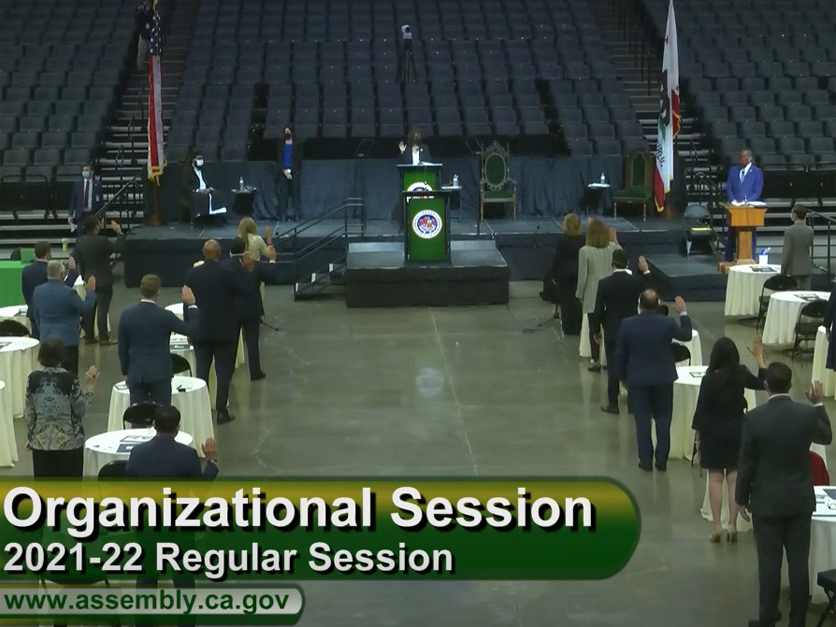 The Assembly swears in for the new legislative session in the Sacramento Kings arena.

At its annual meeting on Monday, the California Farm Bureau unveiled a new logo and new insights on state policy.

CFBF President Jamie Johansson said the state budget has more than doubled since 2009—a growth of $100 billion that boils down to a spending increase of more than $1 million an hour. He cited the rejection of Prop. 15 and the Republican turnover of some House seats in the state as evidence of voters beginning to push back on government spending, while grassroots efforts by farmers are playing a stronger role.

CFBF Administrator Jim Houston said voters are moving past the “Trump factor” and know that “there’s no longer somebody to blame back in D.C.” for issues like rising unemployment and closed schools. He said the negative press toward the Legislature and Gov. Newsom on these issues may serve as a check on their authority.

“They were just drunk with power,” he said. “There was no threat to [any of their decisions].”

Houston said these bold shifts have unanticipated consequences. He hoped this would “put a pause” on the Democratic control of the Assembly that has endured for most of the last 60 years. He expected to see more moderate Democrats “pop up” ahead of the next election.

On that note: The Farm Bureau’s Mike Zimmerman warned members to “be afraid” if President-Elect Joe Biden selects Air Resources Board Chair Mary Nichols to head EPA, as has been rumored.

“That would be one of the toughest appointments for us to work with moving forward,” he said.

In a statement with six Democratic colleagues, she argued “the excessive presence of plastic waste damages the health of the environment.” USMCA, she added, should allow room for countries to pursue policies in the public interest.

The biennial water infrastructure effort is nearing the finish line.

The House is set to vote on the conference report for the Water Resources Development Act of 2020, clearing the way for the Senate to approve the measure and send it to President Donald Trump’s desk.

The measure includes a funding shift that has been a major priority for the Waterways Council. Under the current legislation, projects have been funded through a 50-50 cost-share between the Inland Waterways Trust Fund and the Treasury Department. Under the update, the fund’s contribution would be reduced to 35%.

The bill is on the suspension calendar, which allows the House to quickly move bills that can garner the support of two-thirds of the chamber.

A handful of ag groups have been pushing the federal government to get farm and food employees right behind health care workers and vulnerable populations in the COVID-19 vaccine distribution line. Now, that request has also been filtered to the nation’s 50 governors.

In a letter, the National Cattlemen’s Beef Association, National Pork Producers Council, and the North American Meat Institute all request meat and poultry industry workers – including processing facility employees, Department of Agriculture inspectors and livestock producers – be given “very high priority” in the vaccine distribution process.

The groups point to the critical infrastructure designation from the Department of Homeland Security earlier this year and say after health care workers and high-risk individuals, prioritizing meat industry workers “would allow the utilization of an existing system to deliver the vaccine to a significant and important part of the workforce.”

The National Milk Producers Federation is encouraging the Department of Agriculture to extend the signup for 2021 Dairy Margin Coverage past the current Friday deadline.

In a letter sent to USDA Monday, NMPF urged Ag Secretary Sonny Perdue to give producers Jan. 30 to apply.

“Extending the DMC deadline to the end of next month will allow farmers to better focus on the turbulent marketing environment we now expect to see in 2021, once we are through the upcoming holiday season,” NMPF President and CEO Jim Mulhern said.