It’s only December and still months away from U.S. farmers going into the fields to plant next year’s soybean crop, but the Chinese are already buying it.

Uncertain yields in South America, where farmers are just finishing planting in Brazil and Argentina, together with tight global stocks, have the Chinese betting on prices now and realizing they need to lock down whatever soybeans they can as the country continues to rebuild its swine herd after much of it was wiped out because of African swine fever.

China, as usual, was the biggest buyer of U.S. soybeans in the latest weekly trade data out of USDA for Nov. 27-Dec. 3, buying 685,400 metric tons for delivery in the 2020-21 marketing year. What really stood out to analysts, though, was the fact that China was also buying U.S. soybeans for the 2021-22 marketing year, snapping up 126,000 tons in the seven-day period that won’t be shipped until after next year’s harvest.

Another sale of 42,000 tons to “unknown destinations” is also on the books for 2021-22, according to USDA, and that could well be destined for China next year, says John Baize, an analyst for the U.S. Soybean Export Council.

“Chinese importers decided they didn’t know (how big) the Brazilian crop is going to be,” Baize said, and characterized their response: “We better hedge ourselves and go buy a couple of cargoes a year from now. We’re going to need them.”

Brazil planted a record-breaking 95 million acres of soybeans this year, up from about 91 million acres last year, but early dryness and then erratic rains are prompting local analysts to cut yield and production estimates.

“Some soybean fields are so bad off that they’re burning them and other fields look great,” says Baize. “It’s awfully spotty down there.”

USDA did not reduce its forecast of 133 million metric tons for Brazilian soybean production, but AgRural, a Brazilian ag consulting firm in the southern state of Paraná, did. The firm now say it expects production to reach 131.6 million tons, down from an earlier prediction of 132.2 million tons.

The Brazilian government is still holding onto its forecast of 134.4 million tons, and Brazil’s crushing organization — ABIOVE — is predicting production at 132.6 million tons.

But the size of the Brazilian crop is just part of the equation, says Dan Basse, president of AgResource Co. U.S. and Brazilian stocks are expected to be very tight next year, but buyers can still lock in November futures contracts for U.S. soybeans at less than $11 per bushel — more than $1 per bushel less than importers are paying now. And there’s a lot of uncertainty between now and then.

“November soybeans are a bargain. They’re looking at that and starting to buy,” Basse tells Agri-Pulse.

And it’s not just November U.S. soybeans the Chinese are buying. They’re also buying July-August soybeans out of the Gulf. That’s old crop 2020-21 soybeans from the U.S. at the height of Brazilian new crop exports, but Basse says there is mounting concern whether Brazil will be able to supply all that it is promising.

US ag exporters already feeling the pain of China trade war
China buying more US beef and soybeans
Argentina, Europe buying up US soybeans as China shies away

China’s “big concern is an execution of prior sales and right now (U.S.) soybeans out of the Gulf are only about 5 cents more expensive than out of Brazil,” Basse said. If you’re a buyer and you want assurances of supply, the Gulf would offer that opportunity, which is why I think the Chinese are now looking at late summer positions. If you look at what the Brazilian crop will be and you look at what the Chinese import needs will be, there’s not enough Brazilian supply and, like last year, it will be sold quickly.”

And that’s why, Basse says, the Chinese are locking in the July-August contracts for U.S. soybeans.

There is also concern about the lateness of Brazilian soybeans hitting the market.

In a normal year, Brazil would start physically exporting its crop toward the end of January or the beginning of February, but those first shipments won’t likely begin until March this year, says USSEC’s Baize. China has just begun booking shipments for March and that’s about a month late.

While Brazilian ending stocks in 2021 won’t likely be as low as they are this year — Brazil’s already expected to import a million tons this year for its crushers after exporting too much — they will still be very low, according to the latest ABIOVE estimate. Brazil is expected to end this year with just 219,000 tons of soybean stocks and next year the forecast is for 419,000 tons. As a comparison, Brazil finished 2019 with 3.3 million tons in ending stocks. 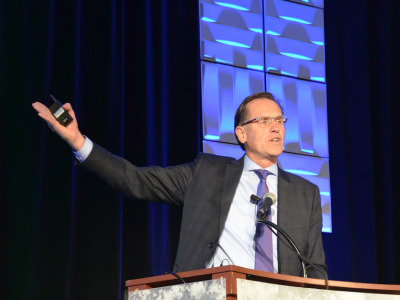 Stocks are going to be tight next year and demand — especially from China — will continue to be strong, says Basse. The country needs to rebuild its swine sector, he noted, but also predicted that the Chinese will be eager to live up to the second-year commitment of the “phase one” agreement with the U.S.

Addressing the growing commitment to purchases of U.S. soybeans during and after Brazil’s crop next year, Basse said, “To me what it’s saying is that the Chinese have a need for soybeans in the far future and they are also planning to adhere to the best of their ability to the second year of ‘phase one.’ (China) is going to keep at it and try to negotiate ‘phase two.’”

Kirk Leeds, CEO of the Iowa Soybean Association, acknowledged the “phase one” pact in an interview with Agri-Pulse, but stressed it’s all about supply and demand.

“Most of us in the marketplace think that most of the growth we’re seeing in China has a lot more to do with the growth in their demand for soybeans.”