Home » Newsom's budget offers a few carrots. But farm groups fear the stick will be next
WEST

Newsom's budget offers a few carrots. But farm groups fear the stick will be next

Trade groups are pleased to see that Gov. Gavin Newsom wants to allocate some funding for climate and water programs in the initial budget proposal for the coming fiscal year. Yet Newsom’s executive orders and approach to pesticides has raised concerns that such mandates and increased taxes will further raise regulatory costs for farms and many other California businesses.

With a record $227 billion budget, the administration plans to spend $385 million to support agricultural initiatives that advance the state’s climate goals, according to the Department of Finance. This drew immediate praise from Assembly Ag Chair Robert Rivas of Hollister.

“This provides farms and ranches with the ability to help California agriculture lead the way in combating climate change,” said Rivas in a statement.

In a message more in line with the agriculture industry, Senate Ag Chair and Fresno Republican Andreas Borgeas appreciated the funding as well, but warned about government overreach and the elephant in the room when it comes to California water policy.

“California leaders must reevaluate the timing of certain regulatory programs funded in the budget and ensure they are not impediments to our agricultural sector, as many farmers are struggling due to the pandemic,” said Borgeas. “California leaders must also consider investing in water infrastructure and conveyance in order to deliver clean water to our state’s farms and communities.”

Newsom is proposing to restore much of the funding for incentive grants cut from the final budget in 2020 due to the pandemic.

As part of Newsom’s $4.1 billion climate and environment package, CDFA’s Healthy Soils Program would receive $30 million from the state’s Greenhouse Gas Reduction Fund. The same cap-and-trade revenues would deliver $170 million to a program at the Air Resources Board for incentivizing farmers to replace tractors, harvesting equipment and irrigation pumps with newer, lower-emission models.

This nearly meets the $190 million that ag groups were calling for in the 2020 budget, though it does not account for the additional funding needed this year to steer the program back onto the initial funding schedule established under former Gov. Jerry Brown’s administration.

Ag groups worry Newsom’s executive order banning gas and diesel engines in California would require far more incentive funding, since farmers would have to replace those engines again before 2035 with costly electric models that have yet to reach mainstream markets.

“There's a feasibility problem,” said Matthew Allen, who directs legislative affairs for the Western Growers Association. “And that has now been exacerbated by the COVID-19 pandemic, and people had to necessarily shift their focus in other places.” 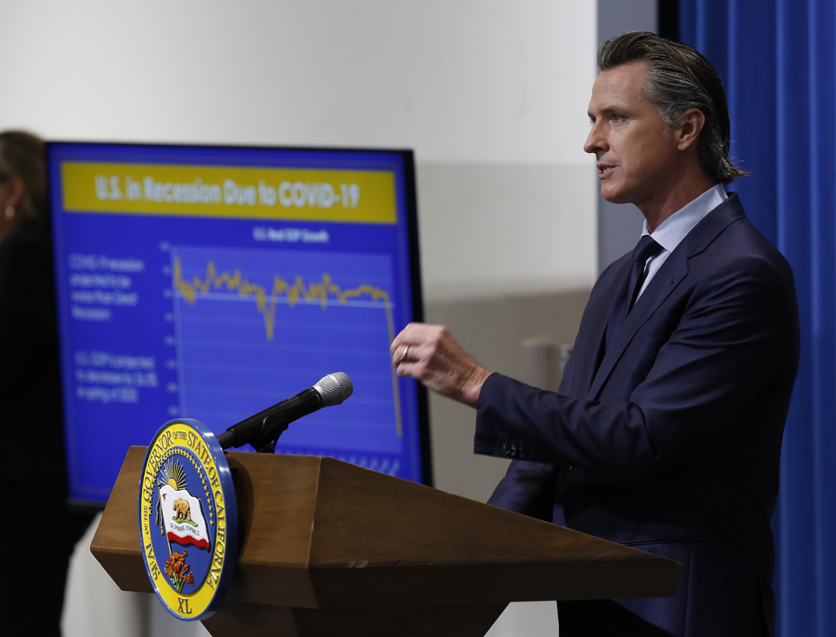 Newsom has released his initial budget proposal for the coming fiscal year.

To help meet Newsom’s goals for zero emission vehicles, the budget would allocate $1 billion for electric charging and hydrogen fuel cell infrastructure and another $500 million for purchasing incentives.

Senate Republicans took issue with such an ambitious level of spending to fulfill a goal that is unrelated to the state’s economic downturn.

“In the middle of a global pandemic with 70,000 infections a day, millions of unemployed, tens of thousands of shuttered businesses and skyrocketing housing costs, buying an electric car is probably not top-of-mind for low-income Californians,” the caucus said in a statement.

The administration is seeking to further address air quality issues in targeted hot spots through $265 million in grants for the AB 617 Community Emissions Reduction Program. A small portion of this money would offer ag equipment grants for farmers in the vicinity of Shafter in the San Joaquin Valley.

Newsom has also revived his proposal for a Climate Catalyst Fund, which would offer low-interest loans to farmers investing in green technologies. The proposal has different parameters than a much larger one the governor pitched early in 2020. The state would seed the fund with $50 million rather the $1 billion originally proposed.

Many in agriculture were skeptical when lawmakers were developing a legislative mechanism for the fund last year.

“Farmers are unlikely to take on additional debt, particularly small, diversified and socially disadvantaged farmers, as well as the state’s dairy farmers, who have been operating in a deficient state for several years,” said Jeanne Merrill of the California Climate and Agriculture Network (CalCAN).

California Farm Bureau policy advocate Taylor Roschen, who has shared similar concerns over adding more debt for farmers, said in a recent CDFA advisory hearing that she would like to see more details on how the California Infrastructure and Economic Development Bank would actually handle these loans.

CalCAN was disappointed the administration is relying on the loan program to continue the goals of CDFA’s Alternative Manure Management Program, rather than restoring funding to the program. Funding for the department’s dairy digesters program has also shifted to the loan proposal.

Another climate-smart program housed at CDFA, the State Water Efficiency and Enhancement Program (SWEEP), would gain $40 million in the budget. Those grants, along with $60 million to help communities implement plans for the Sustainable Groundwater Management Act, would come from taxpayer dollars. The budget also supports ongoing negotiations for voluntary agreements over Bay-Delta flows. Trailer bills seek to address restoration projects in the San Joaquin River basin, groundwater recharge efforts, and staffing needs to assess aging infrastructure along the State Water Project.

The budget does not include water infrastructure funding, though this was a priority action in the governor’s Water Resilience Portfolio. California Farm Bureau Administrator Jim Houston said the administration could allocate more funding from the Proposition 1 water bond that voters passed more than seven years ago.

State Senator Melissa Hurtado of Sanger was largely in agreement with the governor’s budget, but noticed the absence of water infrastructure dollars as well.

“We must also invest in key water and healthcare infrastructure projects with an eye on ensuring rural California, and the Central Valley, gets its fair share,” said Hurtado.

One a positive note, the inclusion of more than $372 million to speed up the vaccine rollout across the state won praise from rural interests.

“It is good to see that the administration is aware that there needs to be more done when it comes to getting the vaccine distributed,” said Allen, adding that ag groups have worked with the administration to ensure that ag workers remain a top priority in Newsom’s vaccine plan.

Houston was frustrated the budget proposal did not include tax credits for ag employees, which he argued would generate more hours for those workers as the state implements new ag overtime requirements.

The Newsom administration has responded to industry concerns over skyrocketing compliance costs by proposing to assess reporting requirements across agencies and develop a central hub for all reporting.

“There's at a minimum 150 regulations that every farmer has to comply with,” said CDFA Secretary Karen Ross in a call with stakeholders. “The paperwork and the complexity of doing the compliance of that is pretty overwhelming to our small farms.”

Ross said the initiative would bring “meaningful reforms” by reducing the paperwork burden and better informing agencies in their regulatory decision-making process.

Houston, however, pointed out the state’s abysmal reputation when it comes to IT services and cost overruns with implementing new technology, adding that the proposal fails to address the actual issue.

“The problem that we've been complaining about is not that we have to go to too many websites,” said Houston. “It's that there are just too many regulations. And this isn't reducing any of those. It's just making it easier for our folks to pay.”

One new regulatory cost proposed in the budget is a plan to overhaul and increase the mill assessment fee on pesticide sales, which would generate an additional $45 million in new revenue for the Department of Pesticide Regulation.

Republican Asm. Vince Fong of Bakersfield said the budget fails to address the escalating costs of doing business in California.

“Adding more bureaucracy only fuels the frustrations and anxieties of everyday Californians,” said Fong. “California businesses and families have lost hope and are fleeing this state in droves, and this budget does nothing to change that.”

Ag groups are watching closely for how the governor and lawmakers may try to incorporate into the budget new taxes on companies to pay for homelessness programs.

Asm. Adam Gray of Merced is leery of such proposals.

“I was glad to hear the governor rebuke those who have called for tax increases to make up for a budget deficit that simply has not materialized,” said Gray. “Increasing taxes during a global pandemic and economic recession is moronic. We should be looking for opportunities to lower taxes as families continue to struggle to make ends meet.”

In 2020 the administration anticipated the budget deficit to grow as high as $54 billion due to the pandemic. Yet the state relies heavily on higher income earners, who actually saw gains last year. Analysts are now forecasting a windfall of about $15 billion with a $7 billion deficit in the next fiscal year that will grow to $11 billion by 2025.

Democratic leaders in Sacramento already have a long list of spending priorities for that budget surplus.

“We are working toward early budget actions to address the most pressing needs caused by the COVID-19 pandemic, including renter and mom-and-pop landlord protections, getting school campuses reopened as safely as possible, assisting small businesses and boosting economic recovery,” said Senate President pro Tempore Toni Atkins.

Now that Newsom has introduced his budget plan, the Legislature will begin holding committee hearings on the items proposed leading up to the May budget revision, when the state will have a more refined estimate of tax revenues. The Legislature will then have until June 15 to finalize the budget and send it to the governor for his signature.