Government farm payments are still likely to fall significantly this year, but the cliff won’t be quite as stiff as it once looked like it would be.

In its latest farm income forecast, USDA estimates farmers will receive $25.3 billion in government payments this year, which is about twice the amount (see USDA graphic) producers typically were receiving before the Trump administration began pouring money into the farm economy through the Market Facilitation Program. Last year, government payments hit $46 billion.

The government aid is expected to include $8 billion in funding to be distributed from the omnibus bill enacted in December. USDA also estimates farmers will get $2.5 billion in additional Coronavirus Food Assistance Program payments and $2.8 billion through the Paycheck Protection Program’s forgivable loans.

Read our report on the farm income forecast here. 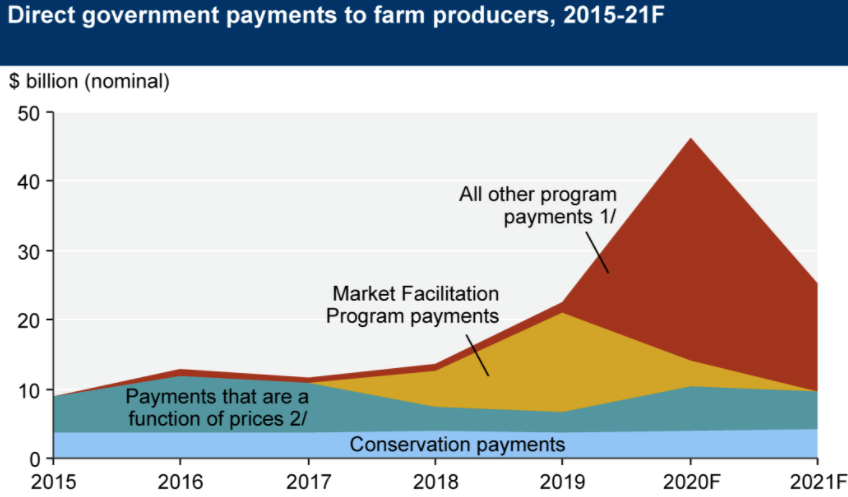 After pause, booming demand for H-2A
Demand for H-2A farmworkers appears to be on the rise again despite some evidence of softening during the COVID-19 pandemic.

What happened? AFBF economist Veronica Nigh argues the slowdown in applications as the pandemic was ramping up last year wasn’t due to “a lack of demand, but rather uneasiness about how the H-2A program would operate as a result of COVID-19.”

Looking ahead: On Thursday, USDA is releasing the annual Farm Labor Survey that the Labor Department will use to set minimum H-2A wage rates for 2021. The Trump administration tried to scrap the USDA survey last fall and freeze the wage rates for this year, but those moves were blocked in the courts.

Four Democratic senators have introduced legislation to end the U.S. embargo on Cuba and increase trade with the communist country, where U.S. farm groups see the potential to sell a lot more corn, soybeans, rice and other goods.

“To continue this outdated, harmful policy of isolation would be a failure of American leadership. While Trump increased tensions with Cuba during his disastrous time in office, I am optimistic about President Biden’s new diplomatic course,” says Senate Finance Committee Chairman Ron Wyden, D-Ore., who introduced the bill together with Sens. Patrick Leahy, D-Vt., Richard Durbin, D-Ill., and Jeff Merkley, D-Ore.

More than 20 farm groups such as the National Corn Growers Association and the American Soybean Association signed on to a letter to President Joe Biden last month asking him to improve relations with Cuba.

The judge, ruling in a case filed by the Center for Food Safety and other groups in California, found the plaintiffs had standing to pursue their claims. “The final rule allows for line speeds at plants to increase, which will decrease the amount of time each inspector can devote to examining a carcass for potential disease,” U.S. District Judge Jeffrey White said in his ruling.

Two other cases are pending in federal court against the rule.

The U.S. exported about 2.4 million metric tons of dairy products in the 2020 calendar year, setting a new record high, according to the International Dairy Foods Association and USDA data.

“While logistical issues challenged the industry in 2020 and some continue today, U.S. dairy exports maintained an accelerated pace throughout the year,” said IDFA President and CEO Michael Dykes. “Export volumes were boosted by 10% over 2019, setting an all-time record for export volumes in one year and pushing export values to more than $6 billion for the first time since 2014.”

Just when the World Trade Organization had settled in October on Nigerian Finance Minister Ngozi Okonjo-Iweala to be its next director-general, the Trump administration announced its opposition to her, insisting instead on her rival candidate South Korean Trade Minister Yoo Myung-hee.

But now, Yoo has dropped out and the Biden administration is throwing its “strong support” behind the Nigerian – the only remaining candidate.

“The Biden Administration looks forward to working with a new WTO Director General to find paths forward to achieve necessary substantive and procedural reform of the WTO,” the Office of the U.S. Trade Representative said in a Friday statement.

FDA moves to coolers in investigation of lettuce from Yuma

The Food and Drug Administration is focusing on commercial coolers in an effort to pinpoint contamination problems with romaine lettuce from Yuma County, Arizona.

FDA says it “plans to begin collecting samples of romaine lettuce from commercial coolers in February and intends to continue sampling through the end of the romaine harvest season in Yuma.”

The samples will be tested for E. coli and salmonella, FDA said. The assignment, as FDA called it, comes “as part of ongoing surveillance efforts” following a 2018 E. coli outbreak that killed five people and sickened more than 200.