The Senate Finance Committee will hold a hearing Thursday to consider the nomination of Katherine Tai to be President Joe Biden’s U.S. Trade Representative and point person on the future of trade relations with China.

One of the biggest trade policy questions for the new administration is on whether or not the U.S. will join the Comprehensive and Progressive Trans-Pacific Partnership with Japan, Vietnam and nine other Pacific Rim countries. That’s a goal that many U.S. farm groups like the National Pork Producers Council say they fully support.

USDA Chief Economic Seth Meyer tells Agri-Pulse consumer demand is likely to depend on how the economy grows. He says the livestock industry needs “that strength of domestic demand that they saw last year, along with good, solid – maybe not growing, but solid – export demand in order to use up some of the meat they’re producing.”

Take note: A new report from Rabobank projects U.S. beef demand to slip from last year’s peak, noting that the fiscal stimulus Congress has been providing the economy will inevitably dry up. Another factor: It will likely be 2022 or 2023 before full-service restaurants fully recover.

U.S. prohibitions on Chinese cotton and cotton products are likely to have a far bigger impact than previous bans that have been imposed on imports linked to forced labor, according to an official with U.S. Customs and Border Protection.

The shipments affected by the ban on cotton from the Xinjiang province are “potentially massive,” said Brenda Smith, an executive assistant commissioner in CBP’s trade office. Speaking at USDA’s Ag Outlook Forum, she said it’s likely to be a challenge for CBP to manage all of the cargo that it expects to detain.

Xinjiang is the largest cotton-producing region in China.

U.S. grain export leaders are holding out hope for ethanol expansion in China but say future expansion remains in question as China continues to be a major importer of corn.

“I don’t know where they are going to go with the mandate, right now they are allowing provinces to kind of think about it a little further,” Bryan Lohmar, a U.S. Grains Council director in China, said during USDA’s Ag Outlook Forum.

Lohmar is skeptical because he noted the country has expanded ethanol in the past but then backed off when it realized it didn’t have the corn stocks available. China stopped its plan to implement a nationwide 10% ethanol mandate for gasoline in January 2020.

“With Americans dying in the cold, natural gas CFO bragged about ‘hitting the jackpot’ while prices jumped 100X,” Smith said in a tweet. “Families could face huge utility bill increases. I’m calling for a full investigation, including possible price gouging.”

There is a “dire need” for a new herbicide mode of action to control pigweed in Arkansas, weed scientists from the University of Arkansas are saying after confirming glufosinate-resistant samples of the weed in the northeast part of the state.
It’s the first documented case in the world of broadleaf resistance to glufosinate, sold as Liberty, the scientists, led by Jason Norsworthy, said.

The problem does not appear to be widespread across Northeast Arkansas based on extensive screening, they said, but recommended growers take “special care to remove any escaped pigweed populations prior to seed set, regardless of crop grown in the field.”

The Federal Trade Commission needs to investigate the way food products are promoted and sold, which currently puts small ag producers at a disadvantage, the Center for Science in the Public Interest said in a letter to FTC commissioners.
“Farmers who cannot afford trade promotion fees typically cannot place products in prime store locations, such as end-of-aisle displays,” the letter sent Friday says.

CSPI also wants the FTC to look specifically at the online environment, where larger food and beverage companies pay retailers to give their products prominent placement.
“The increasingly pervasive practices of trade promotion and category management, when coupled with personalized data collection, have the potential to threaten competition, limit consumer choice, and, ultimately, harm public health,” CSPI said.

Customs doubled interceptions of prohibited meat from China in 2020

U.S. customs officials have been increasing their scrutiny on prohibited imports and confiscated twice as many shipments of prohibited chicken, pork, beef and duck from China in 2020.

The Customs and Border Protection agency attributes the increased seizure to better coordination with the USDA and “a special initiative to prevent the introduction of Asian swine fever in the U.S.” China has suffered from outbreaks of ASF, classical swine fever, Newcastle disease, FMD, bird flu and swine vesicular disease.

“The role of the CBP's agriculture specialists at our ports of entry is more crucial than ever,” said CBP Director of Field Operations in Los Angeles Carlos C. Martel. 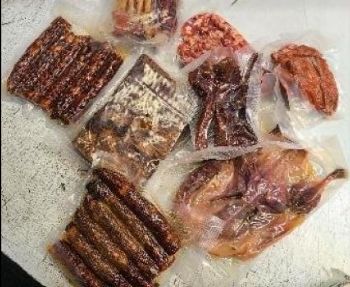 He said it: “All those state agencies we’ve talked ugly about sometimes, we’re going to have to have their help to get Texas back up and running.” That was Texas Agriculture Commissioner Sid Miller speaking to Agri-Pulse, referring agencies that will be critical in the recovery from last week’s winter storm that hit the state.