Lawmakers can now turn their eyes toward next Wednesday when Joe Biden will be inaugurated as president after Donald Trump was impeached by the House for a second time. The Senate won’t take up the impeachment before Trump leaves office.

The ten Republicans who voted for impeachment included California’s David Valadao, who represents one of the most important ag districts in the country and narrowly won election in November to the seat he lost in 2018.

By the way: Rep. Dusty Johnson, R-S.D., told PBS that he has been getting death threats, including one on Wednesday morning. He said a photo of his home was posted on a Facebook page maintained by his opponents. 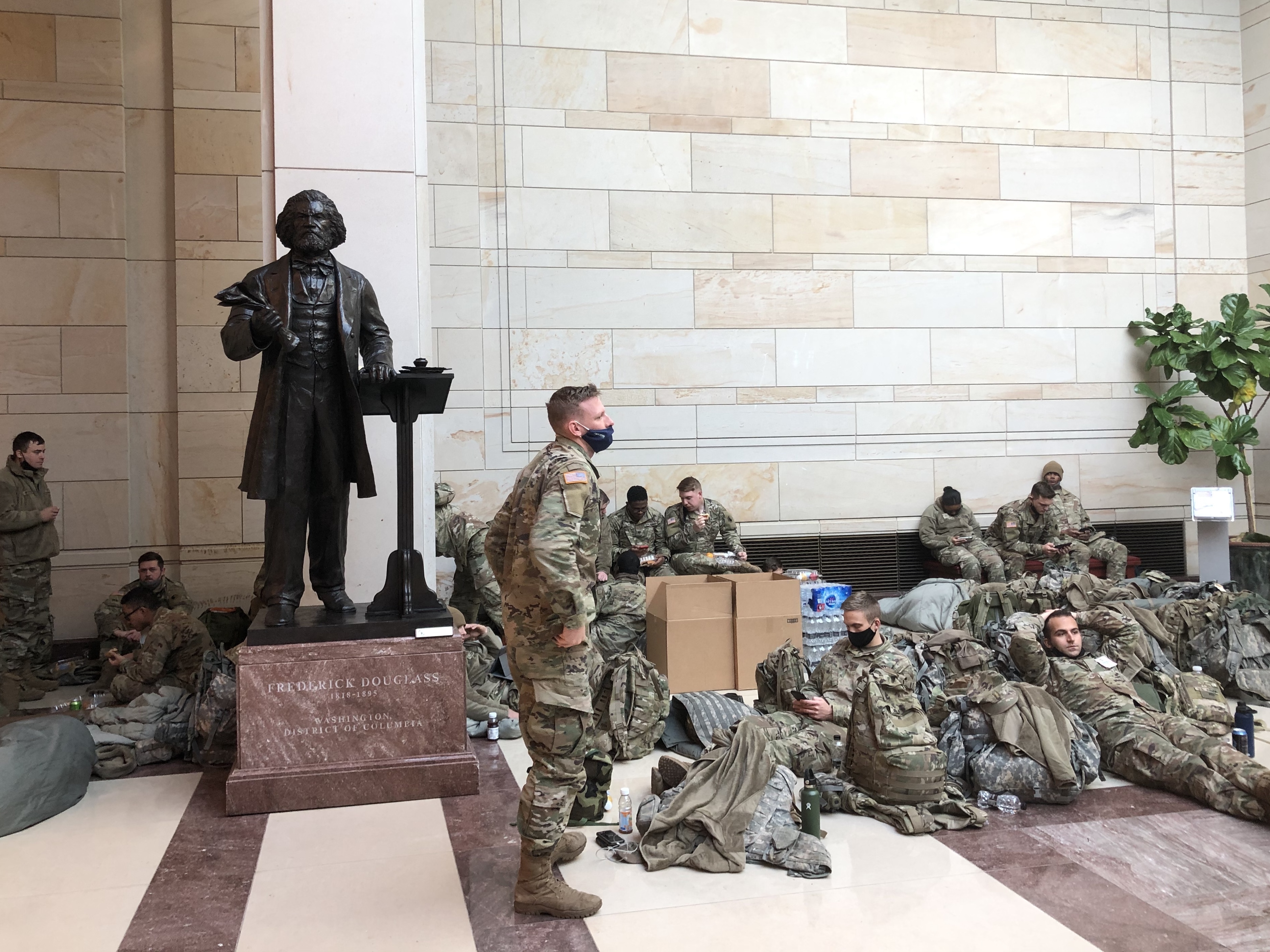 Some of the National Guard members camping in the Capitol following last week's riot. (Pool photo)

Several major food and agribusiness companies have suspended their contributions to members of Congress in the wake of the Capitol riot and the GOP challenges to Biden’s election. Walmart, the world’s largest grocer, has specifically cut off support to Republicans who backed the election challenges.

Companies that have paused contributions to all lawmakers include Archer Daniels Midland, Cargill, CME Group, Tyson Foods, Smithfield Foods, Coca-Cola and Target, according to the Wall Street Journal, which is tracking the corporate actions.

The Biotechnology Innovation Organization also has suspended its contributions.

Biotech regs up in the air as Trump departs

A Trump administration spokesman confirms there are ongoing talks about a possible transfer of regulatory authority for genetically engineered food animals from FDA to USDA. “This is a deliberative process between HHS, FDA, USDA, and the White House and is still ongoing,” a spokesperson for the Department of Health and Human Services tells Agri-Pulse.

Politico reported earlier this week that FDA Commissioner Stephen Hahn refused to sign a memorandum of understanding turning over some animal biotech oversight to USDA. FDA is part of HHS.

Neither the White House nor USDA responded to requests for comment on the issue.

Clint Nesbitt, a senior director of science and regulatory affairs at BIO, said the group was “aware that there does not appear to be an agreement between USDA and FDA to move this forward.”

Keep in mind: USDA issued an advance notice of proposed rulemaking in December that would allow FDA to continue regulating genetic technologies intended for biomedical and pharmaceutical use.

Biofuel producers are anxiously waiting to see whether EPA will grant a series of new Small Refinery Exemptions from the Renewable Fuel Standard as Trump leaves office.  EPA Administrator Andrew Wheeler could act as soon as today.

A bipartisan group of House members appealed to the administration to deny the exemptions. EPA has yet to act on 66 waiver requests.

Biden’s choice for U.S. Trade Representative, Katherine Tai, talked online Wednesday with more than 20 members of the Ag CEO Council, leaders of farm groups from across the industry.

“Noting the essential role of agriculture to the economy and the recovery, USTR-designate Tai reiterated her commitment to ensuring that farmers and agriculture have a seat at the table as we rebuild, and that they remain a focal point of U.S. trade policy,” according to a readout of the meeting from the Biden transition.

A think tank headed by Biden’s choice to run the Office of Management and Budget, Neera Tanden, says the Farm Credit Administration should analyze the potential impact of climate change on the Farm Credit System.

“The agricultural sector is heading toward a climate reckoning,” says a report released today by the left-leaning Center for American Progress. “Policy experts are beginning to uncover the true scale of climate risk to the financial sector, and agricultural lenders are not immune.”

Among the recommendations: The Securities and Exchange Commission should bolster agribusiness climate risk disclosure requirements; capital reserve requirements for the FCS should be increased; and programs to finance sustainable farming practices should be expanded. 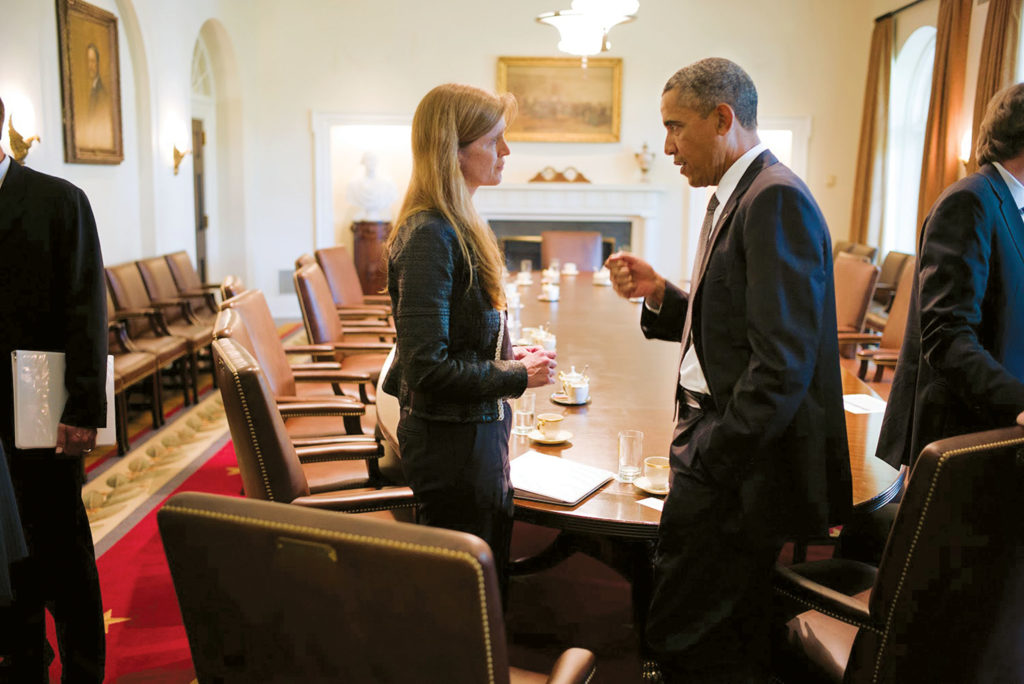 USAID to get higher stature under Biden

Biden is signaling big plans for the U.S. Agency for International Development by announcing that his nominee to be the new administrator for the agency – Samantha Power – will be a member of the National Security Council.

Power, speaking in a video posted with a tweet, says Biden “sees development as central to U.S. national security and that is why he has elevated USAID – given it a seat on the National Security Council.”

Together with USDA, USAID oversees the donation of about $2 billion worth of food annually to the neediest regions of the world.

Read our report on Power here, and don’t miss our profiles of key Biden picks as well as our story on the warm reception that Biden’s choice for EPA is getting from farm groups.

US expands ban on ag products from China’s Xinjiang region

Citing forced labor, the Trump administration broadened its ban on Chinese ag goods to include all cotton and tomato products produced in the Xinjiang Uyghur Autonomous Region. Acting Deputy Homeland Security Secretary Ken Cuccinelli said the U.S. “will not tolerate forced labor of any kind in U.S. supply chains.”

The action follows a November decision by the administration to bar cotton and cotton products produced by the Xinjiang Production and Construction Corp., what the administration considers “an economic and paramilitary organization subordinate to the Chinese Communist Party.”

US fails to fill EU quota for beef

There was plenty of excitement and optimism when the European Union agreed in 2019 to dedicate the majority of its hormone-free beef import quota to the U.S., but the COVID-19 pandemic stymied shipments in 2020, according to USDA's Foreign Agricultural Service.

Joe Schuele, a spokesman for the U.S. Meat Export Federation, told Agri-Pulse: “The good news is we have plenty of quota available. We just need the restaurant sector to bounce back in Europe.”

He said it. “These are dark times, there is a tremendous amount of outrage and rage.” - Rep. Dusty Johnson, R-S.D., in the PBS interview.