This story is the second installment in a series that will run in Agri-Pulse this month exploring how various facets of the food and agriculture industries adjusted to the COVID-19 pandemic. Last week's story focused on the rural broadband impact of the virus.

Many ag jobs were designated “essential” at the beginning of the COVID-19 pandemic. A year later, masks and other safety precautions have become common in farm fields and packing houses. Food continues to move from the farm to the consumer. But impacts on the people making that happen have been significant.

Chuck Conner, president and CEO of the National Council of Farm Cooperatives, said his members saw right away that to keep operations functioning they would need to keep up with the latest information, which was changing almost daily.

“They knew their employees were essential, but at the same time,” he said, in the early days and weeks of the pandemic people “did not understand the breadth and the depth of this disease.” NCFC shifted its focus from legislative and regulatory issues to putting out COVID updates across the country, “everybody relied heavily upon their trade associations.”

Farmworkers got the message that they needed to keep working, but the rest of the details were often slow to come. Advocates for California field workers also shifted their focus to address immediate needs. Hernan Hernandez, executive director of the California Farmworker Foundation, said his group quickly began distributing masks and other personal protective equipment — 750,000 items handed out to date — and, in time, was able to set up testing sites at farm locations.

“We did see an increase in regards to COIVD-19 education and PPE as the pandemic was expanding,” he said, and the foundation helped translate information into multiple languages to reach more workers.

Early on, meat processing plants bore the brunt of the outbreaks in food and agriculture. In May, meat plant workers had much higher rates of infection than the overall population, but during the summer and fall surges in the general population, meat plant cases per capita weren't as high, as illustrated by this graph from the North American Meat Institute showing New York Times national case counts and The FERN's meat plant counts.

Unions representing plant workers were outspoken with criticism of plant owners through much of 2020, alleging, for example, slow or inadequate implementation of safety measures. But in December, the United Food and Commercial Workers International Union and NAMI jointly called upon governors to prioritize meat and poultry plant workers for vaccination.

"Meat companies are ready and willing to partner with the federal and state governments to provide vaccinations to frontline meat workers," NAMI spokesperson Sarah Little told Agri-Pulse in an emailed statement.

On March 5, UFCW announced a partnership that will vaccinate plant employees in Colorado, Iowa, Kansas, Nebraska and Texas.

For dairy farmer Jenni Tilton-Flood of Flood Brothers, LLC, in Clinton, Maine, initial protections for workers included stopping all tours (which typically bring 500-1,000 people to the farm annually) and asking truck drivers and farm staff not to get too close to each other. Farm employees already had paid sick time and used it if they had any symptoms. Then, in November, one worker tested positive. Tilton-Flood said they worked with a mobile testing service to get testing on-site, where they have 31 employees outside of the 21 family members associated with the farm. Ultimately, half of the milking staff had to quarantine, though only six tests were positive.

“We ended up in consultation with our veterinarian and our nutritionist,” she said, and ultimately dropped from 3 to 2 milkings per day, which cut into output and, therefore, profit. It wasn't an easy decision, and the weeks of quarantine were hard on the farm owners and the employees. 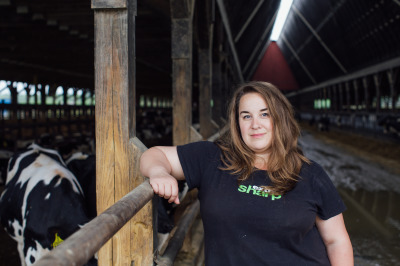 “We’re not organic, and the Maine Organic Milk Producers reached out,” she said, noting her gratitude for the community's support.

The ill workers never developed severe symptoms and there hasn't been another case since. About 1,500 cows are being milked three times a day, again, and no one has lost a job.

Across food and ag sectors, employers implemented and employees complied with COVID safety precautions to keep food moving, even though the pathways sometimes changed.

“The need of farmworkers, the priority of farmworkers, the ability to keep a supply chain moving really was highlighted,” especially in the fresh produce sector, Robert Guenther, senior vice president for public policy at the United Fresh Produce Association, said in a presentation at USDA's Ag Outlook Forum last month.

Initially, it seemed outdoor farm work might be slightly safer, but a study from the University of California, Berkeley, School of Public Health found high infection rates in Monterey County field workers. Perhaps more striking than the 42% of study participants who were infected but asymptomatic is the 57% who had symptoms and went to work anyway.

“People didn’t want to stop working,” said Sarait Martinez, executive director of the Binational Center for the Development of Oaxacan Indigenous Communities, which helps people who may only speak their native Indigenous language. Martinez said testing was a challenge for myriad reasons, including access and the fact that workers feared if they tested positive they would lose their jobs. Now, the vaccine is starting to change the dynamic. 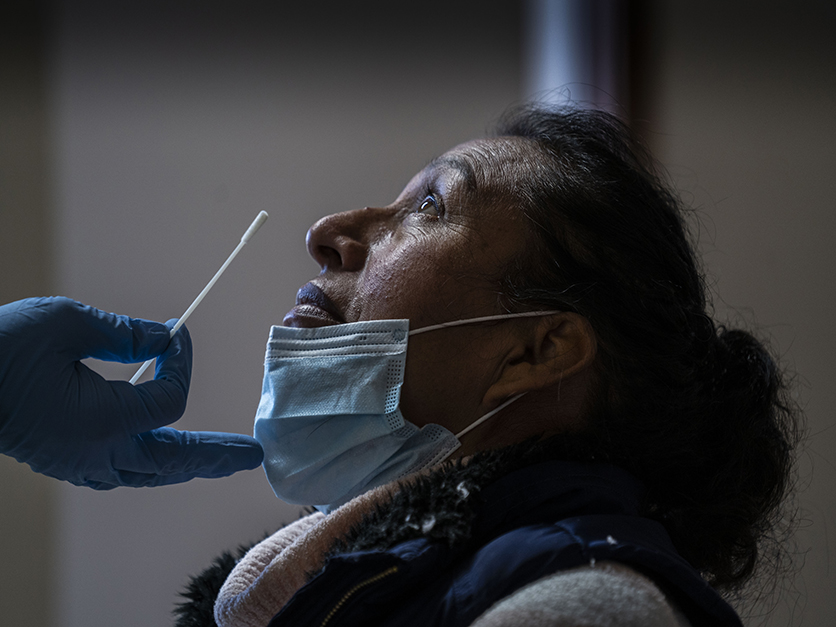 A farmworker in California is tested for COVID-19. (Photo courtesy of UC-Davis)

“There’s a shift,” Martinez said, from fear to hope. Many workers and employers see vaccination as the key to reaching a post-pandemic era.

The vaccine, Martinez said, “is that piece that we share in common. Everyone wants it.”

But misinformation and myths about the vaccine are widespread in farmworker communities.

“We really want to make sure that we’re encouraging people, when it’s their turn, to get the vaccine,” said Nayamin Martinez, director of the Central California Environmental Justice Network (and no relation to Sarait Martinez).

Heather Riden is with the Western Center for Agricultural Health and Safety at UC-Davis, which has long worked to ensure ag workers get accurate information, a need that grew during the pandemic and has been exacerbated as vaccines have rolled out. Farmworker advocates say myths around vaccine safety and efficacy are rampant and run the full gamut of what is circulating on social media. Riden says one strategy to combat vaccine hesitancy is for workers to get vaccine information from the same people who speak their language and have provided them with masks and hand sanitizer for the past year. Those groups have been on the ground deepening trust with workers throughout the pandemic.

“They’ve been doing that, oftentimes, not paid,” she said, “just providing service to their community.” In California, the state-funded COVID-19 Statewide Agriculture and Farmworker Education Program, coordinated through the Western Center, is expanding education efforts and getting money to some of those organizations. The project will produce materials in six different languages and multiple formats — posters, audio files, videos — and distribute them through multiple channels to reach as many workers as possible.

Already in California, some farms are welcoming vaccination clinics. Other states, like Florida, have come under fire for not providing enough vaccinations to essential farmworkers.

A Purdue University dashboard estimates nearly a half million cases of COVID-19 among ag workers nationwide, with the largest numbers in California and Texas, each of which has tallied more than 45,000 cases. Traveling to work together and living in multigenerational homes with people doing essential work in different places may contribute to spread.

"We live in such a close-knit family network that once the virus is in the community, it's there," Sarait Martinez said.

Changes have also come for workers who travel to the United States on H-2A visas. They now get a little more space to live in, for example.

“I think that’s a positive,” Hernandez said, and though it was enacted to allow some distance during the pandemic, he hopes the change outlasts COVID-19.

Getting into the United States became more difficult for H-2A workers, though. NCFC's Conner said when the State Department told staff around the world to work from home, a big question loomed about required in-person visa interviews.

“We thought we were in a tremendous jam,” he said. But then many groups and employers worked together and came up with a proposal the State Department was able to adopt that allowed for virtual interviews with visa applicants. Ultimately, more H-2A workers entered the country in 2020 than in 2019. Conner said he'd like to see the interview flexibility continue, though whether it will remain is unknown.

Then, when the South African variant led the United States to block arrivals from that country, “we intervened, lots of us, in a big way,” Conner said, to get those essential ag workers in.

“The administration at that particular time chose to grant exemptions for those workers coming in from South Africa,” he said.

Riden hopes the community groups that work directly with employees will continue to play a strong role in connecting vulnerable workers to reliable information. The Binational Center has grown from a staff of seven to 25 in the past year and Sarait Martinez said she’s hiring 10 more people.

For Tilton-Flood, the crisis of having COVID-19 burst her family's farm bubble "has proven to us, this is what we want to do." And it's prompted the family to have important, necessary but difficult conversations about farm succession. After a year of pandemic, she's thankful all the family members are still around to have those discussions.

Conner is confident the country has seen that, in the face of a new and huge challenge, agriculture and its workforce came through. He hopes that will be remembered.

“People were fed,” he said. “We’ve got a remarkable system.”