Singer-songwriter Jason Mraz has multiple hits and Grammy awards from his music career, but he also grows avocados and coffee commercially and has dozens of other fruit trees on his farm in Oceanside, California. It began when he bought a 1970s-era avocado grove. Area farmers advised him to diversify and he saw that coffee might be an up and coming crop. “And being as my career began in coffee shops, and I love coffee culture, it seemed like the perfect fit,” he said. “It also required a good amount of risk taking. And I know too, that I'm in the position where I can take those risks.”

He spoke with Agri-Pulse on March 1st.

Why did you choose to testify at an assembly hearing when you have your own public platform?

This was an opportunity to speak to policymakers and that's where real change also has to occur. Yes, it has to occur on the consumer level and on the homeowner level. But it has to definitely happen at the state level, and even the national level, to help farmers get the credits that they need and the incentives they need to do more organic and regenerative and sustainable farming, to increase wages for laborers, to help growers get a better price for their crops. […] The testimony was on behalf of the (California) Avocado Commission for a number of causes in relation to regenerative agriculture, both regeneratively for the planet and the top soil, and the sort of perennial trees that avocados are, helping to improve air quality, create a hedge against wildfires, draw carbon down, etc. Regeneration also has to occur for farmer legacies. There aren't enough young farmers today to replace retiring farmers and that's a real threat to agriculture in the United States. So at the state level, there needs to be some more incentives. I would say carbon credits, or tax credits, or however it wants to play out, to allow young people to move into agriculture and fulfill their passion and not have to have a second job the way most farmers do.

Talk to me a little bit more about how carbon credits would be a piece of being able to get more young farmers on the land. How are those things intertwined?

Right now, you hear (about carbon credits) around curbing fossil fuel emissions and basically other industries. They saying if you can curb your emissions, if you can change your ways to help the environment, we can give you some carbon credits, or we can give you some tax incentives to help your business while you make these changes. And nothing yet is happening in agriculture, where if we did (have something), farmers could have programs that helped train them in regenerative and sustainable agriculture (and) helped to sustain them while they do these transitional practices. Ultimately, the environment would become a more productive place in the future. But to get there, farmers are going to have to train their field workers, they're going to have to change some of their practices and all of that it's going to be very, very costly. So having incentives and credits would, I believe, look more appealing to a family that's getting involved in farming. They look at the startup cost, [it’s] astronomical. I have to assume most farmers are going to go to a bank and get a loan for either their land or their crop that they're starting. And they're going to live in debt most of the time. But if they know that that debt can be written off fast, or that debt could be offset by a credit or an incentive from the state, then more people are more likely to stay involved in farming.

What kind of confidence do you have in agriculture broadly, that farmers will do whatever is appropriate on their own farms to contribute to climate goals?

In general, I'm optimistic. In the small cases that I've seen, just through Kiss the Ground, the movie, there is that multispecies, biodiversity rebirth on a piece of land that has been basically given over to restoration or regeneration management that makes it easier going forward for the future of the farmer.

Now, I shouldn't say makes it easier because once you go regenerative, organic or biodiverse, you're basically inviting multiple species to grow in a spot versus one species of food. Multispecies can be very, very expensive. It can cost a lot of money just to weed a large acreage of property and most farmers don't want to add that to their workload. But with regenerative, and with this training, comes the ability to identify how biodiversity, multispecies growing, is actually better for the crops you're growing, better for the future of the land you're growing on, better for the air, better for the earth because it's got plant material plugged into the soil. Again, drawing carbon down, so bringing in the carbon credits to add something farmers have never had to think about. If they were told, “hey, if you keep your land green, we'll give you some extra dough for that because you're gonna have to work harder when you need to remove that green around your food,” it would be an incentive to keep that property green. […] If we were just telling people to do a certain thing, there'd be resistance. But you tell them and you give them incentives, you give them a huge tax break, give them coupons … I don't know how it's gonna work. 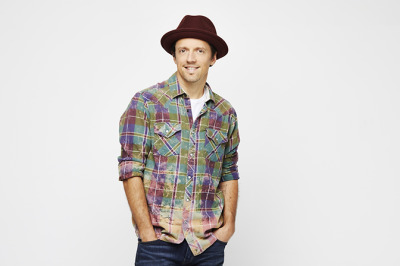 How do you think your musical career and your farming career influence each other?

Farming has taught me patience in music. I've had the pleasure of writing a song and letting it grow, nurturing it. “I'm yours,” for instance. I wrote it in 2004, I started playing it around 2005, 2006 a little more. By 2007 it was becoming very popular, just (through) word of mouth and through MySpace and through audience sharing. And by 2008, I finally put it out in the world. That very much resembles the life of a fruit tree. Plant something, water it, prune it, feed it, nurture it, see what it wants to be and then about 4 or 5 years in, it kind of arrives at its earliest maturity. I've noticed that now when I make music, I'm okay to let things breathe, let projects grow, let projects develop. And 4, 5 years in, that song or that idea can reach maturity. That's comforting because previously in the music industry, or in any industry, it's about short gains. It's about what can I do this season? Or how fast can I earn something? What is progress? But nature has its own version of progress and it takes a lot of time. So I've learned a lot through farming about how to manage myself and my other creative projects that I do indoors. I also learned that there there's seasons for everything. In the winter, it's really a season of rest, let things heal, maybe even let the planet (rest) or let the farmer dream a little bit. In the spring, throw out your feed, throw out your ideas, do your trials and that's kind of, for me, the writing and creativity part. Like, let's, come up with 100 ideas. By summertime, you can see which ones are really flourishing, so let's work on those, let's bring those to fruition. Let's even harvest them at the end of summer and then take them to market in the fall. And that too kind of mimics what the musician/songwriter/producer is capable of doing. Then follow that up with a period of rest. (Do) not work full time, all the time, but kind of see the seasons of creativity, nourishing those ideas and then harvesting those ideas and then take them to market. And then rest and repeat.

Farming is also a bit of landscaping and the way we farm, too, we're perennial trees. So when we plant a tree, it’s there until someone else after us chooses to either remove it or cut it down. We're planting trees to outlive us and in that you're essentially designing a landscape or even a botanical garden. As much biodiversity as we have here, it feels more like a botanical garden than it does a traditional farm or fruit orchard. And that is such a beautiful, creative joy, to imagine the different colored flowers and where you want certain fruits to grow or sometimes just letting the rays of the sun dictate where certain things are going to be planted. It's definitely a creative process because you have to work in harmony with nature.

We're coming up on a year now that you have not been touring, performing for groups. What will you do differently now that you've spent a year essentially just on the farm?

I really don't know yet. I do know in the last year I've finally gotten comfortable with the idea of broadcasting from home, reducing my need to move all of my gear from city to city. That seems crazy now. […] I don't think that's sustainable, ironically. I'm assuming it will happen in some version, but if there's a change, I think it's just going to be less. So, having a little more comfort, a little more space for everyone, and even space between gigs to give everyone time with their families, time at home, time for themselves. Time is our greatest wealth. So being respectful… the audience's time, if they're gonna come out to see a show, and they're gonna trust us with their time in a public venue, how are we going to honor that? So that's kind of what's on my mind.