Microplastics in California’s agricultural soils could be hurting crop production, or worse

Microplastics are polluting waterways and soils in California and the Legislature is considering actions to curb this trend.

Among the many sources contributing to the problem are biosolids. Treatment plants filter out nearly all the microplastics from wastewater, and that pollution is often processed into sewage sludge. This nutrient-rich biosolid is frequently applied as compost in agriculture, which can spread the microplastics into the topsoil. Researchers worry this problem has grown in scale so much that it may be a threat to national food security.

“We're seeing new data out every day and new studies just on impacts on agricultural soils from synthetics,” said Senator Henry Stern at an informational committee hearing on the issue last week. “It's a myriad and confounding issue.”

Agriculture has also been in the spotlight as a contributor to California’s plastic waste problem. Materials like mulch film, tarps and single-use plastic containers can degrade into smaller particles that stay in the environment. This was the subject of a two-year legislative battle to drastically reduce the amount of single-use packaging in the state, with two bills narrowly failing to garner enough political support to pass. Food and agricultural companies have invested heavily into research and development for alternative packaging options to transition away from single-use plastics.

The issue of microplastics in soils, however, is just beginning to be understood. Scott Coffin, a research scientist at the State Water Resources Control Board, explained to the environmental safety committee that a recent study has found as much as 300,000 tons of microplastics enter agricultural soils across North America every year.

“We know that plants may uptake and accumulate small microplastics through their roots,” said Coffin. “However, more research is needed to determine what impacts to agriculture exist.” 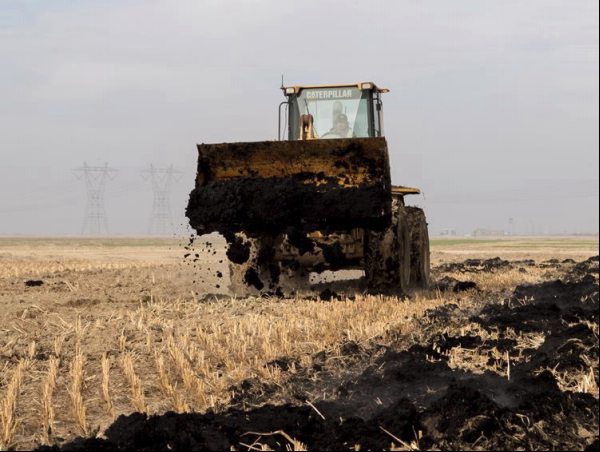 He added that the evidence is limited to only a few studies. One from 2020 showed microplastics can reduce plant growth due to root damage and decrease the number of mature tomatoes a plant produces.

“It's clear that we cannot depend entirely on wastewater treatment to solve the issue of microplastics pollution,” said Coffin. “Doing so may create additional problems with accumulation in agricultural fields.”

With plastics increasingly found in drinking water, the Legislature took action in 2018 by passing Senate Bill 1422. It required the state water board to define the sort of pollution that would fall under the umbrella of microplastics.

UFW bill could be a backstop to SCOTUS decision in union case
In resisting Trump, California lawmakers could put agriculture in a regulatory pinch

“This contaminant suite is incredibly diverse in the number of particle shapes, sizes, colors and associated contaminants that occur within this universe of microplastics,” said Coffin.

The definition includes chemicals from plastic polymers that have been shown to disrupt the endocrine system. One type of chemical found in flame retardant has caused more intellectual disabilities in the U.S. than pesticides, mercury and lead combined, according to Coffin, who added that these health burdens have totaled more than $3 trillion in economic damages.

High levels of microplastics have been found in the San Francisco Bay due to fibers stripped from clothes in washing machines that enter wastewater, as well as fibers from tires washed from roads into the stormwater system.

Alexis Jackson, a research director at The Nature Conservancy, said the presence of microfibers in agriculture has the same impact on soil and crop production as drought conditions. She worried these microplastics are being consumed as well.

“This is the first time I've heard this,” said Committee Chair Bill Quirk of Hayward, in responding to Coffin’s presentation. “And it is scarier than I thought it would be.”

The new definition developed in 2020 set the research process in motion for analyzing the problem and for considering further guidance from the state water board for protecting the health of Californians. The board will adopt a four-year plan for further testing and analysis by July.

“It's hard to see what kind of solution we can have to this other than banning plastics,” said Quirk. “We need to know what can be done today.”