Lawmakers are looking to pass the first child nutrition reauthorization bill in more than a decade this year by building on the political momentum behind measures to expand access to federally funded meals during the COVID-19 pandemic.

The Senate Agriculture Committee, which will hold a hearing on child nutrition programs on Thursday, is expected to move legislation this spring, with an eye to get a bill enacted by the fall, according to sources that have been briefed on the committee’s plans.

Senate Agriculture Committee Chairwoman Debbie Stabenow, D-Mich., hasn’t laid out her plans for the bill, but the committee’s top Republican, John Boozman of Arkansas, has made clear that he wants the bill to be bipartisan and has signaled he’s open to expanding some programs. In the House, the bill is under the jurisdiction of the Education and Labor Committee.

What’s not at all clear is where the money will come from. One potential source: a climate-infrastructure bill — or package of bills — that would be funded through tax increases.

“That’s part of the whole negotiation,” Stabenow told Agri-Pulse, when asked how any expansion of child nutrition programs would be funded. “We certainly need to be doing that. We not only need to make sure children have healthy food during the school year but the summer as well.”

The bill would reauthorize the national school lunch and breakfast, and summer meal programs for low-income children, the Child and Adult Care Food Program, and the Women, Infants and Children (WIC) nutrition assistance programs. The suite of tools were last reauthorized in 2010 when the Healthy, Hunger-Free Kids Act was enacted by a Democratic Congress and signed into law by President Barack Obama. 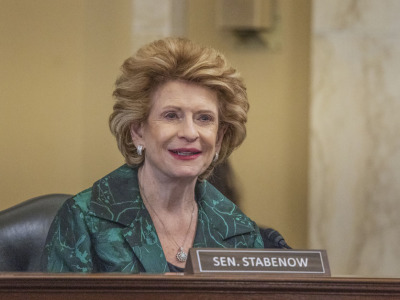 Boozman, speaking to the annual Anti-Hunger Policy Conference, indicated he is particularly interested in expanding access to the summer meals program as well as building on a program initiated by the Trump administration started during the pandemic in partnership with PepsiCo and the McLane Global logistics company to deliver meals directly to children in rural areas.

The Summer Food Service Program “is hamstrung by rules that dictate a one-size-fits-all solution, requiring children to travel to a central location and eat their meals together,” said Boozman. “In rural areas, where roughly 3 million low-income children live, the closest site could be several miles away.”

Meanwhile, the School Nutrition Association and anti-hunger advocates have been urging Congress to make free school meals available to more students, either by making all students eligible for free meals, regardless of income, or by expanding a “community eligibility” provision that enables all students in high-poverty schools to qualify for free meals.

"We know that there are a lot of kids who are not eligible for free meals but are still living in households that are having trouble putting food on the table," said Crystal FitzSimons, director of school and out-of-school time programs for the Food Research and Action Center.

There's now a precedent for providing government-funded meals to all kids: In the wake of the COVID-19 lockdowns, USDA authorized shuttered schools to distribute free meals to all children for free, regardless of income.

"We ... have a lot of really important lessons learned over the last year with the child nutrition programs," said FitzSimons.

Unpaid meal debts are a related issue. Multiple bills were introduced in the last Congress to prevent schools from “shaming” students who are unable to pay for their meals or who have outstanding meal debt. The bills included the No Shame at School Act, sponsored by Senate Ag member Tina Smith, D-Minn., and Rep. Ilhan Omar, D-Minn., which would retroactively reimburse schools for unpaid lunch fees and bar collection agencies going after meal debts.

Stabenow alluded to the issue while speaking at the anti-hunger event. She said Congress should ensure that "children have access to healthy food at breakfast, at lunch, after school, frankly whenever they're hungry, and that they aren't shamed over a meal debt.”

Agriculture Secretary Tom Vilsack, talking to the same conference, stopped short of endorsing universal free school meals, but he suggested making a case that it would help address the nation’s obesity and diabetes problems.

Farm programs could be in play as lawmakers look to 2021
Farmers urge lawmakers to protect export assistance programs
House Dems propose $35B in child nutrition aid; $36B for conservation, research expected

“It's up to all of us to evaluate the benefits of creating a universal free program to specifically identify what those benefits (of free school meals) would be and weigh them against the costs associated, so that you can make the case to any skeptic that at the end of the day we would be better off,” he said.

There also will be an effort this year, led in part by the chairwoman of the House Appropriations Committee, Rosa DeLauro, D-Conn., to expand eligibility for WIC, which served 6.9 million women and children in fiscal 2020.

Last week, she and other House members introduced the Wise Investment in Children Act, which would increase the eligibility age to a child’s sixth birthday and extend postpartum eligibility to two years for all mothers. Postpartum eligibility now ends at six months after childbirth or the end of the pregnancy. The WIC Act is one of a number of marker bills that lawmakers are introducing in hope that the provisions can get included in the reauthorization measure.

School nutrition standards also could be in play, although schools may oppose increasing them.

Public health advocates including the American Heart Association, American Academy of Pediatrics and the Center for Science in the Public Interest are sending a letter to lawmakers on Thursday that will urge Congress to tighten nutrition standards for school meals. The letter doesn't mention specific issues to address, but some of the groups behind the letter want USDA to reduce sodium limits and, for the first time, restrict added sugars.

"Science-based nutrition standards have been shown to decrease childhood overweight and obesity, decrease disparities in access to healthy food, improve nutrition, and can lower health costs," the letter says. "The next reauthorization must not only protect the current standards, but empower the U.S. Department of Agriculture to update the standards to align with the recently-released Dietary Guidelines for Americans and provide resources to help schools successfully transition back to following the evidenced-based meal pattern."

The witnesses at Thursday's Senate Ag hearing will include a representative of the pediatricians' group as well as the School Nutrition Association.

From the other direction, the dairy industry wants Congress to authorize the use of whole milk, including flavored versions.

It’s possible that Vilsack could act on his own to increase school nutrition standards under authority provided by the Healthy, Hunger-Free Kids Act. At a recent National Press Club event, Vilsack noted that the existing standards were based on the 2010 federal dietary guidelines, which have since been updated twice.

“We need to continue to look for a multitude of ways, whether it's sugar, whether it's sodium or fat or whatever it might be … to make sure that we are providing a nutritious meal,” Vilsack said.

The 2015 guidelines added a new limit on added sugars of 10% of total daily calories. The 2020 guidelines, issued in December, maintained the 10% limit despite a recommendation by the Trump administration’s science advisers to lower it to 6%.

“The question is how can we adjust and make sure that whatever we're doing on the school meal side is consistent with those 2020 guidelines," Vilsack said.

Other marker bills that have either been introduced this year or in the last Congress include: