The U.S. ag sector really wants to know what’s coming next for the tenuous trade situation with China, but farmers and ranchers may have to settle for the status quo in the near future as the Biden administration takes its first steps toward dealing with the communist country.

The China issue is “white hot” right now, meaning U.S. government agencies are afraid to touch it directly until there is a comprehensive plan from the White House, according to one official who asked not to be named. Still, the newly confirmed U.S. heads for trade, foreign affairs and agriculture are taking tentative steps to prepare for eventual talks with the Chinese even as the Biden administration continues to review and strategize.

China’s goal, Biden said during his first solo press conference from the White House last week, is to become the wealthiest, most powerful and most globally influential country in the world.

“That’s not going to happen on my watch,” he said.

But rather than talk about specifics like the U.S. tariffs on China, he instead stressed the need to strengthen the U.S. standing in the world before confronting the Chinese head on. That, he said, means investing at home in scientific research and infrastructure, as well as shoring up alliances overseas.

It also likely means the U.S. won’t be taking quick action to try to end the simmering trade war and bring back stability to agricultural trade with China.

Meanwhile, U.S. Trade Representative Katherine Tai is taking the first steps to amass backing from allies like Japan and the U.K. for any U.S. efforts to press China on trade reforms.

Tai is systematically reaching out to her counterparts across the globe, seeking pledges of cooperation on future efforts to confront China over unfair trading practices. 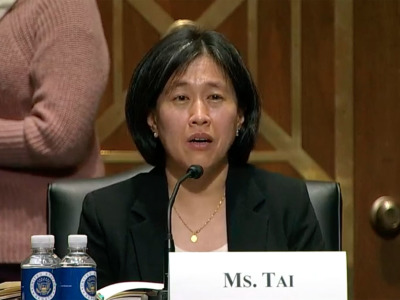 Australia “committed to enhanced cooperation on shared objectives related to unfair trading practices of large non-market economies, such as China,” the Office of the USTR said in a statement after a conversation Friday between Tai and Australian Minister for Trade, Tourism and Investment Dan Tehan.

Similar statements have been released after meetings Tai held with French, Japanese, British and German officials.

“The (USTR) is doing the right thing,” says Joe Glauber, senior fellow at the International Food Policy Research Institute and a former USDA chief economist. “She’s going around to all these other countries and saying, ‘OK, how do we best engage China and how do we get back to a more normal relationship?’ But in the meantime, we’re stuck in this limbo where things can go south in a hurry if all of a sudden Chinese concessions start being withdrawn or they just said they’re not going to live up to the commitments made under ‘phase one.’”

China is buying and importing substantial quantities of corn, soybeans, sorghum, dairy and pork, but all of that trade is happening under ad hoc conditions in which Chinese importers apply for exemptions to the country’s retaliatory tariffs and the government decides on a commodity-by-commodity basis whether or not to temporarily allow the trade.

Still, Glauber says he does not believe China will stop making the exemptions and buying U.S. ag commodities anytime soon.

“That’s what’s driven this from day one — the fact that China needs the soybeans, corn, dairy and meat products,” he said. “They would be shooting themselves in the foot if they didn’t (allow imports).”

The system of tariff exemptions was announced by China last year after the completion of the "phase one" deal with the U.S., under which China agreed to buy $80 billion worth of U.S. ag commodities over a two-year period.

Both countries continue to levy tariffs on hundreds of billions of dollars' worth of products, and Tai said just this week that the U.S. is not ready to change that; in an interview with The Wall Street Journal, she said “yanking off tariffs” would be a mistake.

Glauber says he understands, but also stresses that a tariff-free trade situation would be best for agriculture.

“China has commitments under the so-called ‘phase one’ agreement, but all the way along a lot of people have felt like I do — that it would be far better when all these tariffs come off,” Glauber said. “On the other hand, the (Biden) administration is in a bind because you can’t just say, ‘OK, we’re taking off all the tariffs’ when you put them on in the first place to get China to behave better in the world markets.”

And before the Biden administration gets close to lifting its tariffs and normalizing ag trade, Glauber said a lot of non-ag issues will have to be settled.

China — with its military expansion in the South China Sea, its repression of rights in Honk Kong and its treatment of the Uyghur Muslims in Xinjiang — is one of the most common issues being addressed by Secretary of State Antony Blinken as he travels the world, in person and virtually, to build international support and leverage for confronting the Chinese.

On Saturday, Blinken and European Union Minister of Foreign Affairs Josep Borrell agreed to revive the U.S.-EU dialogue on China because, Blinken said, “we know that we can approach Beijing most effectively when we are working together and coordinating our approaches.”

Normalcy for U.S.-China trade may not be coming quickly, but it looks like it is coming, says Glauber.

“It’s a long process, but they’ve started it and that’s a positive sign,” he said. “The good news is that in the near term, China needs U.S. ag, so they’ll continue to import.”