Farm-state Republicans to count on biofuel Democrats in infrastructure spending

Farm-state Republicans are wasting no time blasting President Joe Biden’s infrastructure plan for investing $174 billion for the electric vehicle market compared to the mere $15 billion set aside for biofuels research and development.

Within the $174 billion, the proposal establishes grant and incentive programs for the private sector to build a national network of 500,000 EV chargers by 2030. His plan would also replace 50,000 diesel transit vehicles and electrify at least 20% of the yellow school bus fleet through a new “Clean Buses for Kids Program” at the Environmental Protection Agency, according to a White House fact sheet.

Sen. Chuck Grassley, R-Iowa, told ag reporters he was disappointed in Biden’s plan for not including more money for biofuels infrastructure to help reduce carbon emissions.

“Instead of subsidizing the most wealthy Americans with rebates for electric cars ... we should be investing in biofuel infrastructure, which is proven to reduce emissions,” he said.

Grassley argued that electric vehicles make up roughly 2% of new car sales and only the top 2% of American households can actually afford them.

“If the goal is, ‘We need to reduce carbon emissions from the transportation sector as quickly as possible,' then we shouldn’t be shoveling all of this funding in one direction toward electric vehicles,” Cooper told Agri-Pulse. Instead, he argued, the funding should be applied more broadly.

This includes “blender pumps, new tanks in the cases where those are needed (and) there are some modest improvements needed at the terminal level in some cases,” he noted.

Donnell Rehagen, CEO of the National Biodiesel Board, said the country would benefit from having more access and options to fuel.

“Having infrastructure opportunities ... for blending and distribution of higher blends of biodiesel and renewable diesel is only going to help move those cleaner burning products out to the end consumer faster,” Rehagen told Agri-Pulse. He said more money for storage tanks, blenders and terminals is needed.

As conversations get rolling on Biden’s $2.7 trillion infrastructure plan this week, Grassley said he’ll be looking for help from Sen. Amy Klobuchar, D-Minn., to ensure improvements to blender pumps are included.

“When you have someone like Klobuchar on your side, you have a good chance of getting it done,” Grassley said.

Grassley said fellow Iowa Republican Sen. Joni Ernst will be counting on Klobuchar to have Biden’s ear for biofuels, as they did with the Trump administration.

Ernst and Klobuchar introduced a bill in February that would authorize $500 million over five years for infrastructure grants for fuel retailers. It would also direct the Environmental Protection Agency to finalize a proposed rule to repeal E15 labeling requirements warning drivers about E15’s potential impact on vehicles.

Klobuchar told the Minnesota Corn Growers Association last week she thinks there are a few avenues to get her proposal passed.

“One is in an infrastructure package of course. The other is as part of an energy bill or as part of any type of renewable fuel legislation,” Klobuchar said. 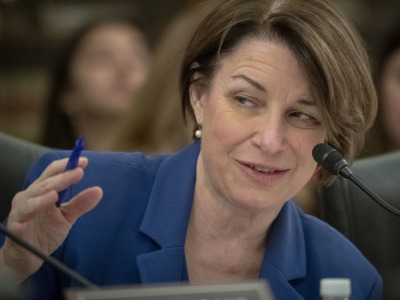 But former House Agriculture Committee Chairman Collin Peterson, D-Minn., argued that Klobuchar is not on the right committees to get that funding included. He said she needs to be on Senate Finance or Energy and Natural Resources committees.

“That’s where the action is going to be and she’s not there, she’s on Rules and Judiciary,” Peterson told Agri-Pulse. Peterson thinks that, in the end, the money Biden has proposed for electric vehicles will be reduced, and he is hopeful some of the money would go toward biofuel infrastructure.

But he pushed back on the notion that electric vehicles were the biofuel industry’s biggest threat moving forward.

“I think that’s the least of our worries at this point. We should be focused on the fact that we don’t have access in the marketplace,” he said.

Republican Sen. Deb Fischer of Nebraska, one of eight lawmakers who met with Biden to discuss the infrastructure package on Monday, cited the EV funding as an example of the sharp difference that he has with Republicans over the proposal.

“There’s more in there for electric vehicles than there is for roads and bridges, ports and airports all together,” Fischer told reporters. Fischer says she suggested breaking the massive bill up with one for roads and bridges, one for ports, and one for airports. But her impression from Biden when she left the meeting was he wants to “go big.”