The most comprehensive study to track state and federal regulatory impacts on growers has been released. Regulatory costs grew 265% on average across a range of farmers in the San Joaquin Valley from 2012 to 2018, while total production costs rose by just 22% on average over the same period, according to the findings.

“Nobody else has actually looked at what is the entire burden of regulatory costs that agriculture faces,” study co-author Lynn Hamilton, an agribusiness professor at Cal Poly San Luis Obispo told Agri-Pulse. “The reason that we've been asked to do this research was to allow policymakers a true viewpoint. This is data that was collected from individual growers.”

Hamilton, who is a featured speaker for the 2021 Agri-Pulse Food & Ag Policy Summit West on July 12, has published a series of research papers on regulatory costs for growers. Her 2018 paper revealed a nearly 800% growth in costs for Salinas Valley lettuce growers over the span of a decade, with a much higher burden placed on smaller growers. The new research shows that costs have been rising at a higher rate for larger farm sizes due to new labor wage requirements. Both studies were in partnership with the Air Resources Board (CARB).

The research published on Friday by Cal Poly focuses on a number of regulations that have taken effect since 2012, when Hamilton and her colleagues performed the initial case studies with farmers. Those regulations include the State Water Resources Control Board’s Irrigated Lands Regulatory Program, the Sustainable Groundwater Management Act (SGMA), the Food Safety Modernization Act, state pesticide restrictions near schools, the Affordable Care Act, and state legislation on rest breaks, paid sick leave and agricultural overtime pay.

“It's a shorter timespan [than the 2018 study], but it's over a much broader array of farms,” explained Hamilton. “It's over eight different crops and a wide array of the biggest farms in the state to really small growers and hobby farms who have 40 acres.”

The results showed regulatory costs were higher for permanent crops than for field crops. The greatest cost increases came from labor-related requirements, leading many operations to consider switching commodities or investing in new technologies to reduce those costs. 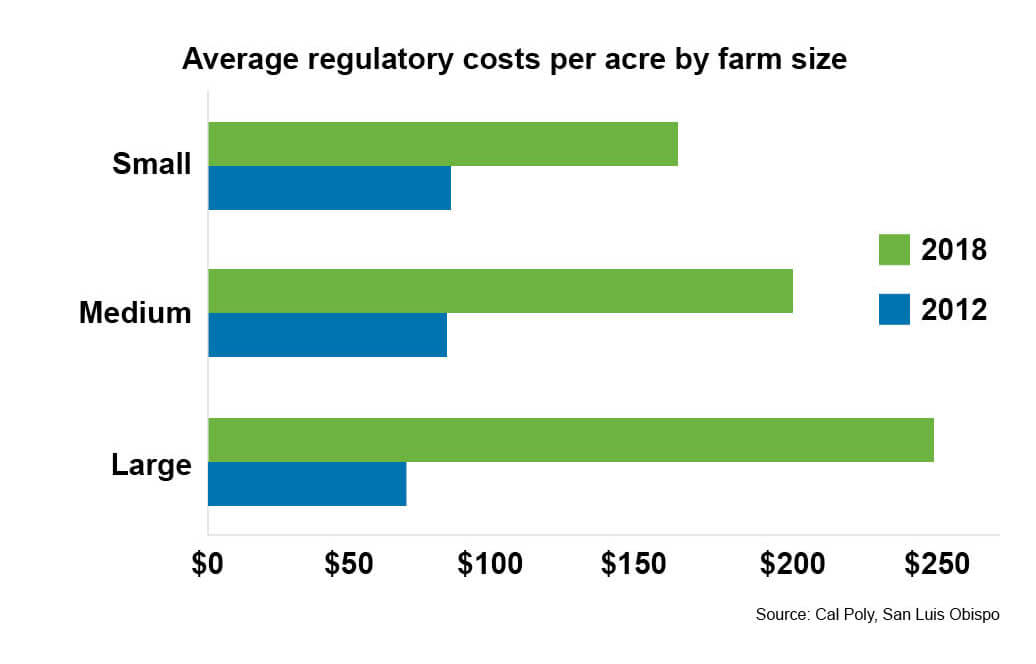 With such high compliance costs for some regulatory programs, growers have been contracting out pest control advisors (PCAs) and consultants for water quality monitoring, among other tasks.

Industry leaders have often pleaded with state policymakers that farmers have limited ability to pass on regulatory costs to consumers, and the researchers note this in the paper. The majority of growers in the valley are “very small producers,” with more than half farming fewer than 50 acres and another 20% farming fewer than 180 acres, “making them absolute price takers in their markets.” Farmers are further limited by global market supply and demand as well as yield risks from weather and other external growing conditions.

“When regulatory compliance costs are added to production costs, holding all else constant, the probability of making profit decreases,” reads the report.

The Newsom administration has acknowledged the added costs that agriculture has faced from agencies working in silos with minimal perspective on the cumulative impacts the layers of regulations have on individual farmers. In a conversation with the Agricultural Council of California last week, Natural Resources Secretary Wade Crowfoot said the governor is passionate about the issue and has been looking for ways to support locally driven leadership when implementing these regulations as a way to reduce costs. Crowfoot hoped these efforts could lead to economies of scale when it comes to state spending on regulatory programs. A provision the administration has proposed in the state budget aims to reduce costs by consolidating reporting and monitoring processes into one central hub. 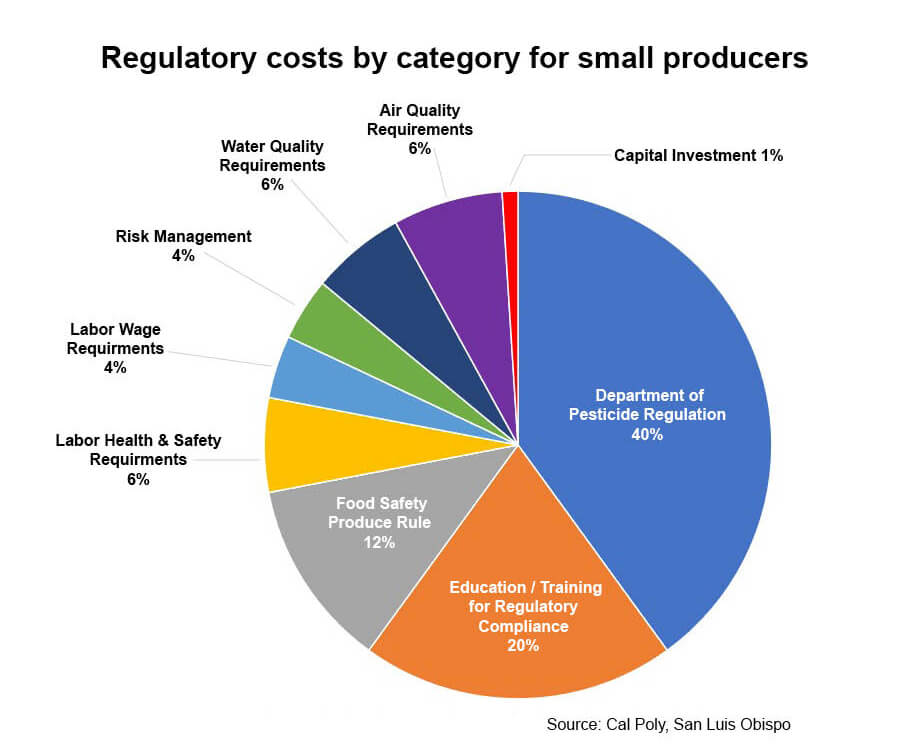 The Cal Poly study points to several more regulations that have been adding substantially more costs since 2018 and were not included in the research. The authors are currently studying the economic impacts to disadvantaged communities from permanently fallowing farmland in the valley under groundwater plans for SGMA. CARB, meanwhile, is requiring agricultural operations with heavy-duty trucks weighing 14,000 pounds or more to replace engines older than 2010 with newer, low-emission engines by 2023, allowing little time for investing in the large capital costs.

Pesticide costs for new regulations were largely underreported in the new study since those are generally embedded in PCA fees and chemical prices. The researchers also struggled with discerning new regulatory costs at the processor level that were passed on to farmers. Packing houses passed down new food safety costs to citrus growers through differential pricing, for example.

On the labor side, the state has steadily phased in the agricultural overtime law, which the authors expect will further reduce the available workforce. The valley lost more than 90,000 agricultural workers during the study period, with an increase in mechanization and a decrease in the labor supply driving the decline.

California is also raising the minimum wage to $15 per hour.

“It is unclear whether this will be a net gain for the community because of the potential decrease in the number of jobs available and/or hours worked,” the report notes.

Another emerging cost for growers is CARB’s recent prohibition on open agricultural burning in the valley. The state budget plan approved by the Legislature on Monday would allocate $180 million in incentives grants to support noncombustion alternatives to burning.

Yet the industry expects to shoulder steep labor, transportation and capital costs in adapting to the ban over the next three years, according to the researchers. Hamilton is working with CARB to further analyze those costs as well.

“For whatever point in time we do the analysis, it's only going to get worse,” said Hamilton. “And that's certainly the case with the burn regulation.”

She shared grower concerns regarding technology and labor costs for any such alternatives.

Despite the dismal numbers brought to light from her studies, Hamilton sees this as an opportunity for policymakers.

“One of the only ways that agriculture is going to stay within this regulatory environment and be compliant,” said Hamilton, “is if public policy is devised to help people comply.”

While incentives grants can go a long way in helping industry adapt, the hurdles for accessing those dollars can be overwhelming. Growers told Hamilton they appreciated discounts for new tractors through CARB’s program for replacing aging equipment, known as FARMER, but they “paid through nose” in terms of time and energy spent on the required documentation.

“That's why I see the value of having this information,” said Hamilton.