Robert Bonnie, President Joe Biden’s pick to oversee USDA’s farm and conservation programs, insisted Thursday that the administration has the legal authority to use the Commodity Credit Corp. to incentivize climate-friendly farming practices.

Bonnie, testifying at his Senate confirmation hearing, said that while carbon doesn’t fall under the definition of an agricultural commodity that could be purchased by USDA through the CCC, the fund can be used to compensate farmers for work they do that reduces greenhouse gas emissions.

He repeatedly assured members of the Senate Agriculture Committee that the department would only undertake climate initiatives that have the support of producers.

As USDA’s undersecretary for farm production and conservation, Bonnie would be in a key position to shape not just how the CCC is used but also how conservation programs and crop insurance are employed when it comes to addressing climate change. Bonnie would oversee the Farm Service Agency, Natural Resources Conservation Service and the Risk Management Agency.

Committee Republicans used the hearing to press their concerns about the administration’s climate policy plans.

Sen. Roger Marshall, R-Kan., read Bonnie a definition of “commodity” and asked Bonnie how carbon captured through farming practices could be classified a commodity.

He went on, “Whatever you do in the CCC has to be about commodity production, agricultural commodities. ... Thinking about how you take advantage of that and manage to create opportunities for producers that may grow those commodities using climate smart agriculture and forestry is the potential link with the CCC. And it's those opportunities in new markets that I think are consistent with the CCC.”

His response was in line with the language of a report he co-authored in November that recommended the Biden administration use the CCC to set up a carbon bank to purchase carbon credits. The report said the CCC has “broad authorization to support, stabilize and protect farm income and prices and to support conservation, and which has been used in similarly innovative ways in the past.”

The committee’s top Republican, John Boozman, R-Ark., raised concerns about another recommendation in the report to use crop insurance to provide incentives for farmers to adopt climate-friendly practices. Boozman wanted Bonnie’s assurance that those incentives wouldn’t affect the program’s actuarial soundness.

Bonnie cited a new premium subsidy program that USDA is offering for cover crops is an example of what the administration intends to do. He said demand for the subsidies “has been quite significant.”

“Those types of approaches that work with the insurance industry are absolutely critical,” Bonnie said.

Sen. Deb Fischer, R-Neb., pushed Bonnie to assure farmers that the administration’s 30x30 initiative to conserve 30% of U.S. land by 2030 will be “100% voluntary.” Fischer noted that Interior Secretary Deb Haaland told another Senate committee this week that 30x30 would be “in large part” voluntary.

“If you look at what’s working in conservation, it’s locally led, it is incentive-based and it’s about partnerships, and for USDA that’s what our work on this will be,” Bonnie said.

The  Federal Communications Commission's broadband maps, which are supposed to identify gaps in service, are only partially used in USDA Rural Development’s funding decisions, Torres Small said. “They’ve been able to identify other ways to identify the need,” she said.

Sen. John Thune, R-S.D. tried without success to pin her down on whether she would support changing eligibility requirements for USDA's ReConnect grant and loan program for broadband projects. Under current rules, 90% of an eligible area must be unserved; he said there are proposals to reduce the threshold to 50%.

“If confirmed it’s my job to follow the law,” Torres Small said. “I certainly appreciate the instructions that are in the statute.” 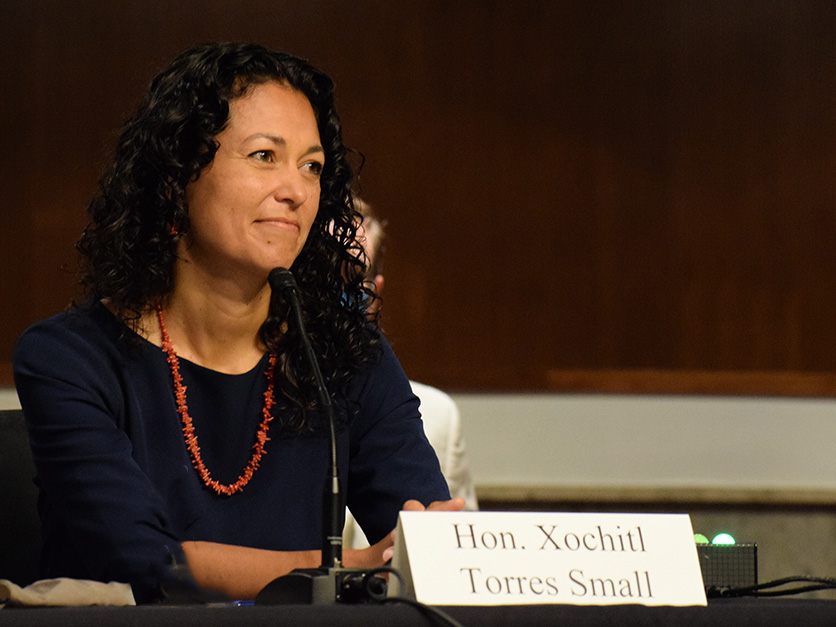 Thune told her it would be a “step backwards to change that to a lower percentage.”

Bonnie heard conflicting concerns from Boozman and Thune about the Conservation Reserve Program. Boozman has accused the administration of improperly raising CRP payment rates to induce enrollments, while Thune expressed concern that enrollments are lagging. An application period for the latest general sign-up period closed on Friday.

Bonnie said there were “extensive conversations” with USDA’s general counsel before the department announced the higher payment rates.

Bonnie pledged to committee Democrats that he would work to address concerns that minority farmers were being shorted by USDA programs. He repeatedly cited an equity commission that will be examining programs for changes that should be made.

“You know the history of  USDA. There’s far more we need to do in this space,” he told Sen. Cory Booker, D-N.J.