The California departments of food and agriculture and public health accepted oral public comments regarding their proposed actions for the implementation of Proposition 12 last week, following a request to hold such a hearing after the 45-day window for written comments closed on July 12.

The four-hour session, in which neither CDFA nor CDPH officials answered questions nor responded in any way, included objections to the proposed implementation plans and timeline for the initiative that California voters passed in 2018. The Farm Animal Confinement Initiative sets standards for the amount of space breeding sows, veal calves and laying hens must have and enforces those requirements by banning the sale of pork, eggs and veal in California, no matter where the animals lived, if housing does not comply.

Concerns fell broadly into two categories: that because it has taken CDFA longer than expected to publish its rules, compliance by Jan. 1, 2022, as specified in the law, is impractical and that the implementation of Prop. 12 will disproportionately impact low-income communities, especially Asian and Latino ones, that are large consumers of eggs and pork.

The North American Meat Institute, National Pork Producers Council, California Restaurant Association and others requested a delay in implementation. Though they offered different specific reasons, all asserted that a rule that is not even final as of the end of August cannot reasonably be implemented by Jan. 1. CDFA's final regulations were due 2 years ago (9/1/2019) and the proposed regulations are 193 pages long.

Jill Damskey of the California Pork Producers Association, for example, said “we are about two years behind in getting real answers that we need in terms of auditing, labeling, biosecurity for these auditors to visit farms, the actual economic impact."

Mark Dopp, general counsel of NAMI, said that if CDFA had complied with the original regulatory timeframe, the pork supply chain would have had 28 months to come into compliance. As the rule is not yet final, he said, “affected companies are on hold with respect to what they must do to comply with Prop. 12 to avoid the risk of criminal prosecution.” He asked the state to grant a 28-month moratorium on enforcement beginning once the final rules are published.

Small California meat processors and a small restaurant chain voiced concern that after barely staying in business through the pandemic, the potential disruption to their pork supplies and/or the likely increase in cost would dramatically hurt their businesses and their customers, potentially leading to job losses and food insecurity.

A caller who identified herself as Latina said pork is a part of her cultural and family tradition but “I am afraid that with Prop 12 pork will be too expensive.”

Steve Needham, vice president of Porky Products, which distributes meat nationwide, said if the law is implemented as currently scheduled, California could see an 80% reduction in available pork, which he estimates would mean consumer prices would increase two to three times, leaving Californians, he said, “less food secure at the worst possible time.”

A report from RaboResearch indicates that less than 4% of US sow housing is currently able to meet the Prop. 12 standards and that the U.S. pork supply chain faces “significant disruption” in 2022 as a result. In addition, Rabobank analyst Christine McCracken projects that the shortfall in pork that meets the new standards is expected to boost California prices, especially for the 35% of California consumers who are the most price sensitive, until the market can adjust. If the law was implemented on Jan. 1, 2022, RaboResearch estimates that pork supplies could fall 50% short of California’s needs. 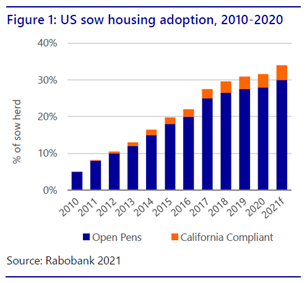 But, in an op-ed published in The Hill on Aug. 20, two professors from UC Davis said their calculations show “the average price of uncooked cuts of pork would rise by 7.7% or about $0.25/lb.” in California, which they say might translate to Californians eating about 6% less of those products annually. They also found that only about 1% of the country's total hog herd would gain any living space as Prop. 12 only applies to breeding sows and many of those are already housed in group pens rather than individual stalls. The professors did find that costs would be incurred throughout the supply chain given the need to segregate hogs destined for the California market and label resulting products accordingly.

Some commenters specifically requested exemptions for show pigs raised by youth in 4-H and FFA. Other specific requests came from auditing and supply-chain companies.

Renae Donus, of the third-party auditing firm Global Animal Partnership, requested that CDFA consider changing the length of time between audits from 12 months to 15 months, which, she said, would still allow “the auditor to audit each farm and see the animals at every season over a 5-year period.”

And Milan Turk, Jr., with Provenance Chain Network, encouraged the state to seek cost-effective implementation technology that would allow California to “leapfrog forward and operate one of the most transparent, respected and trusted supply chains in the industry.”

One commenter, who didn’t offer an affiliation, advocated for implementation on time beginning Jan. 1.

Comments related to pork far outnumbered those for eggs, but Oscar Garrison of United Egg Producers made a specific request that the labeling requirements for eggs sold in California be formulated so the same packaging could also be sold in other states, noting, “currently nine states have similar cage free laws pending on the books and the burden of having state-specific cage free declarations is unnecessary” to meet the spirit of the law.

He added that egg producers are committed to being in compliance when the regulations become final.

The oral hearing on Friday did not include any comments specifically about veal calves.

Prop. 12 has faced multiple lawsuits from pork producers and industry groups that have not succeeded in blocking the law’s implementation. Under the new regulations, the use of breeding stalls is limited and the space requirement for sows is 24 square feet, versus the current industry average of 18-20 square feet, with few exceptions.

“The space requirement will be costly but it’s not the most difficult challenge,” noted Michael C. Formica, Assistant Vice President & General Counsel for the National Pork Producers Council in an email to Agri-Pulse. “Prop 12 bans the use of breeding pens, not just gestation stalls.

“After the piglets are weaned off, all producers move their sows into individual breeding pens to provide individualized care for them, protect them from fighting, and allow them to get all the nutrition they need. They will also breed the sows there. Some producers will keep the sows there for up to 35 days or so before moving them to a group pen. Others can do it much faster - 7 or 8 days. But all of that is illegal under Prop 12.”

“That's the big issue that people are struggling with,” he adds. “What if you have something go wrong, and your sows stay in the pens for 7 hours. Did you just make the entire barn non Prop 12 compliant?  What kind of specialized training do you need? What kind of safety measures will you have to take for your employees who now have to manage angry sows that are fighting each other and need to be bred?

In addition, Formica said “a lot of the details are incredibly vague or make no sense.” For example, he said that producers would not be allowed to let a sow touch the sides of the enclosure or touch another animal. “How do you do that?” he asked.

In a written statement to Agri-Pulse this week, CDFA spokesman Steve Lyle said, "If substantive changes are made to the draft text of regulations, then there will be another 15-day public comment period." But he added that the timeline for implementation "will not change deadlines and requirements set in statute." 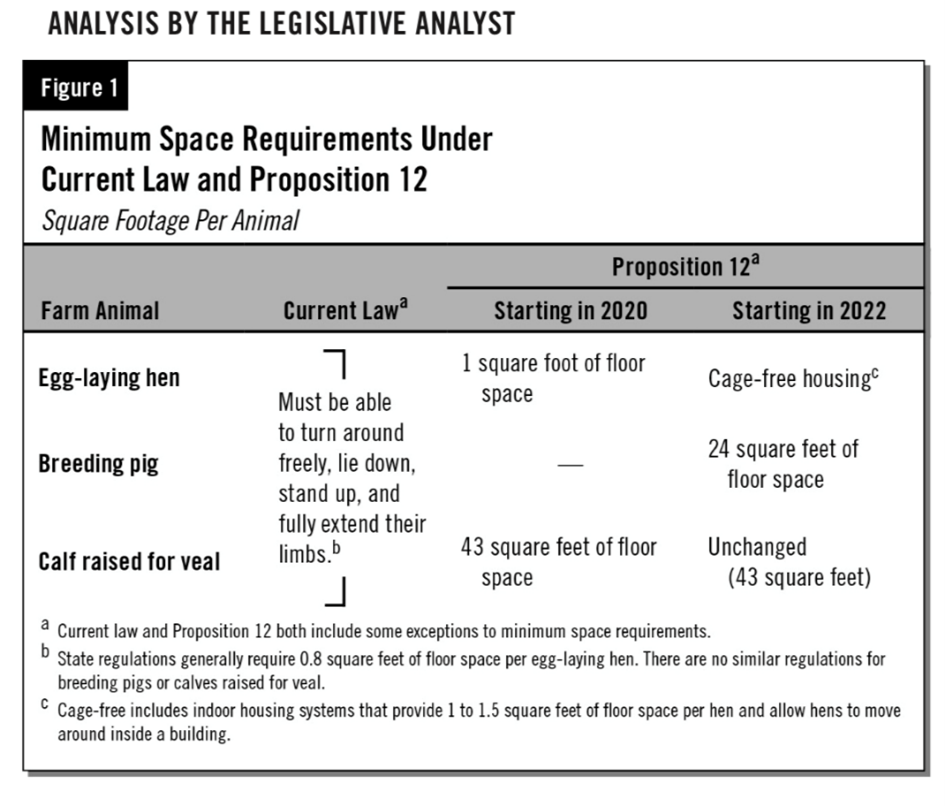