US soy: Soaring renewable diesel not a food-versus-fuel issue

When it comes to producing soyoil for the rapidly emerging renewable diesel market, the industry is adamant that it can expand without the kind of food-versus-fuel criticism from the general public that has plagued biofuels in the past.

California, with its Low Carbon Fuel Standard, is leading the way in lowering the carbon intensity of the fuels that power cars, trucks and airplanes in the state. And the fact that renewable diesel is accepted by the state as a low-carbon, alternative fuel that generates credits, has sparked the race by refiners to produce more and gobble up its primary feedstock: soyoil. 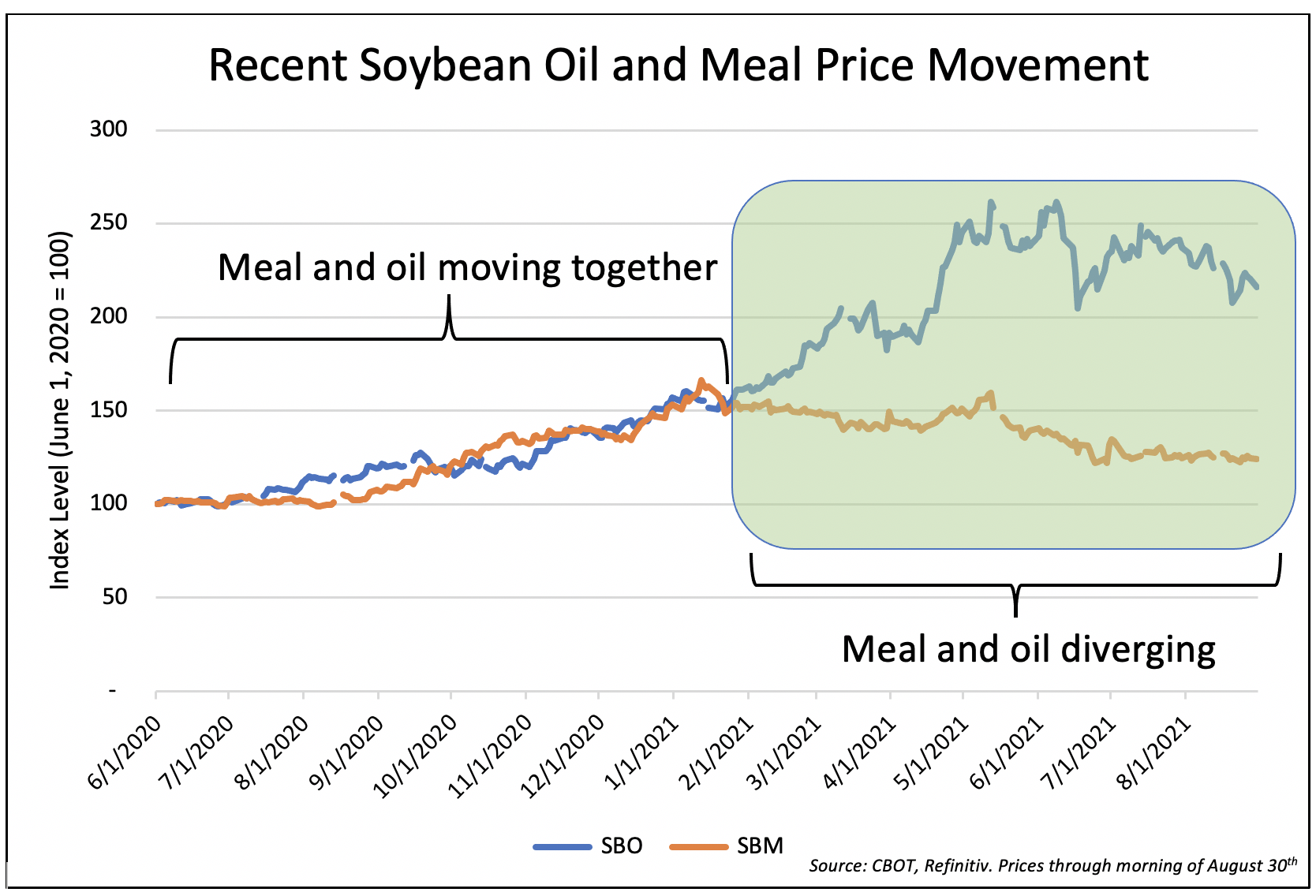 Renewable diesel – the chemical equivalent of diesel, but produced primarily with soyoil instead of petroleum – is now on the rise, and so is the demand for the soybean product. And it’s not just California. Oregon has its low-carbon credit Clean Fuel Program and Massachusetts and Connecticut committed last December to adopting the Transportation and Climate Initiative Program, joining northeast states like Delaware and Maine.

U.S. refiners have already produced about 410 million gallons of renewable diesel in the first seven months of 2021, according to EPA data. That’s on track to surpass the 533 million gallons for the entire year of 2020 and 492 million gallons in 2019.

The National Biodiesel Board says it expects demand for renewable diesel, biodiesel and renewable jet fuel to reach 6 billion gallons by 2030.

While soybeans are also a key ingredient in livestock feed, that doesn’t mean it’s getting more expensive to produce pork, chicken and beef. In fact, say Marshall and other industry analysts, it’s the exact opposite. The rush to take advantage of the new demand for renewable diesel is just making livestock feed less expensive, pushing down the cost of a primary input for the nation’s protein suppliers.

The key, says Marshall, is the 80-20 split. Only about 20% of the soybean crush produces oil, while about 80% produces meal. Now that oil demand is driving the crush, it’s producing an excess of meal and driving down prices for the livestock industry that produces about 55 billion pounds of red meat and 52 billion pounds of poultry every year in the U.S.

Not all food will be cheaper to produce as the demand and price for soyoil grows. Companies that make salad dressing, mayonnaise, margarine and other products are seeing their costs go up. The baking industry, which uses soyoil to make pastries, donuts and cakes is not happy about the rise of renewable diesel and its consumption of soyoil.

“We could stay at these elevated price levels for two years or more because of the demand for renewable diesel,” he said.

The Soy Checkoff led the effort in the 1990s to develop the biodiesel industry as a way to create a new use for excess soyoil, but now, analysts agree, the supply and demand situation for the two soy coproducts has reversed. Soymeal has become the secondary product.

Marshall calls the need to produce more renewable energy while increasing food security the “twin challenges” and promises that soybeans will be key to tackling both without raising the cost of food.

Now, groups like the United Soybean Board want the public to know that “on a consumer level, there isn’t an understanding of the nuance that soybeans produce meal and oil, but that education … is critical in understanding that there’s two co-products,”

“As we are contributing to a global solution in the renewable (energy) space, we’re also effectively contributing towards mitigating escalating food costs by virtue of cheaper inputs to animal feed,” Marshall tells Agri-Pulse. “Two major challenges for the world right now are food access and energy transition. Soy is well-positioned to play a critical role in … both of those challenges.”

It’s not just refiners rushing to reconfigure diesel plants to use soyoil as a feedstock. The crush capacity is also rising.

When ADM unveiled plans in May to bring a new soybean crushing plant online in Spiritwood, N.D., by 2023, it was Governor Doug Burgum who announced the $350 million facility that will process 150,000 bushels of soybeans per day.

“This soybean processing plant is a gamechanger for North Dakota farmers, adding value and expanding the market for this important crop closer to home while also supporting the production of products such as renewable green diesel right here in North Dakota,” Burgum said in a statement. “Now, with innovative leader ADM and collaboration with local economic development and multiple state agencies, this exciting value-added project has come to fruition.”

And rumors are swirling of imminent announcements for another three or four crushing plants, according to industry insiders.

The USDA slightly lowered its August forecast for the soybean crush in the 2021-22 marketing year that begins Oct. 1, but the prediction is still substantially higher than the current year.

Regardless, analysts are already predicting that the forecast is low, and crushing will accelerate beyond expectations. USDA is now predicting a 2.2-billion-bushel crush for 2021-22, but Joe Kerns, CEO of Partners for Production Agriculture, says he expects that total to jump by as much as 170 million bushels.