If you drive past the many fields near the university’s campus in Ames, you can see row after row of the first. But the second exists in a location that hasn’t been completely explored yet: cyberspace.

The researchers, part of the AI Institute for Resilient Agriculture, are using photos, sensor data and artificial intelligence to create “digital twins” of corn plants that, through analysis, can lead to a better understanding of their real-life counterparts. They hope the resulting software and techniques will lead to better management, improved breeding, and ultimately, smarter crops.

“We need to use lots of real-time, high-resolution data to make decisions,” Patrick Schnable, an agronomy professor and director of Iowa State’s Plant Sciences Institute, told Agri-Pulse. “Just collecting data for data's sake is not something that production ag wants. But data which is then linked to statistical models or other kinds of mathematical models that advise farmers on what to do has a lot of value.”

The idea of machine learning systems that can improve or take over typical human tasks has been seeing increased attention over the past couple of years in many industries, including agriculture. In 2019, the National Science Foundation and several partner agencies, including the USDA, began establishing and funding AI institutes to research and advance artificial intelligence in fields like agriculture.

In their call for proposals, the organizations said AI could spur the “next revolution in food and feed production.”

“The Green Revolution of the 1960s greatly enhanced food production and resulted in positive impacts on food security, human health, employment, and overall quality of life for many,” the solicitation said. “There were also unintended consequences on natural resource use, water and soil quality, and pest population expansion. An AI-based approach to agriculture can go much further by addressing whole food systems, inputs and outputs, internal and external consequences, and issues and challenges at micro, meso, and macro scales that include meeting policy requirements of ecosystem health.” 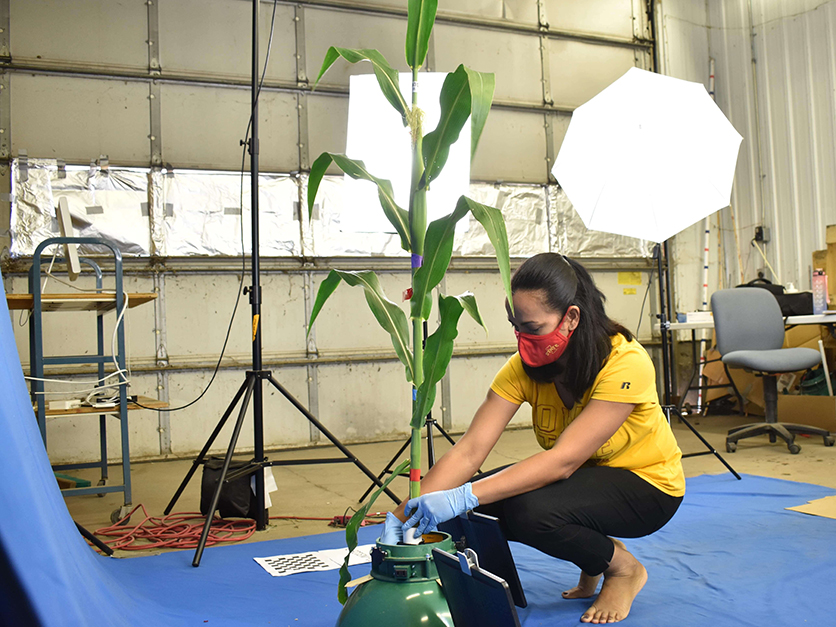 Lakshmi Attigala, a senior scientist and lab manager at Iowa State University, prepares a corn plant to be photographed.

The institute hopes to develop AI algorithms that can take all of the collectible data from a field — whether by ground robots, drones, or satellites — and analyze it to create tools farmers can use to improve production of crops for resilience to the pressures brought about by climate change.

“This is a game-changer,” Baskar Ganapathysubramian, the director of the institute, told Agri-Pulse as he walked toward a nondescript white shed tucked between crop fields on the Iowa State University campus.

“Scouting is based on the visual,” he said. “By using multimodal things, you can actually go beyond the visual and do early detection and early mitigation. That's not only sustainable, because you're going to use less of the chemicals needed, but also amazingly profitable.”

Ganapathysubramian opened the door to reveal a flurry of activity. Directly inside, genetics graduate student Yawei Li held a protractor up to a corn plant in various positions, trying to measure the angles of its leaves.

Across the room, Lakshmi Attigala, a senior scientist and lab manager, grabbed a fully headed corn plant from a gray tote and walked it over to the lab’s makeshift photography studio, where a sheet of blue cloth hanging from the ceiling served as a backdrop.

She placed the corn plant in a small, rotating green vase ringed by light stands and adjusted its leaves, preparing it for a photo shoot. She gave it a unique number, 21-3N3125-1, which was printed on a piece of paper she attached to the front of it.

As the vase rotated, she used two cameras — one hanging from the ceiling and the other sitting atop a tripod in front of the corn plant — to take shots of the plant.

On the north side of the building two researchers — senior staff member Zaki Jubery and graduate student Koushik Nagasubramanian — placed eight more corn plants in a ring surrounding a terrestrial laser scanner. The scanner sends out a signal to detect “point clouds,” or find the exact dimensions of these plants based on which “points” the lasers bounce off.

All three of these actions, while happening separately and in different parts of the room, feed data from the 80 corn plants scanned that day to a computer learning program that can study their features to learn what the plants look like. If cameras, lasers and sensors can collect enough data on corn plants, the software should be able to create near-identical models of them when fully developed.

“The idea is that we perfect something from here and then we do that on a higher scale in the field,” said Nagasubramanian. “That’s a more complicated thing if you have plants in the background and you have changing light intensities and clouds.”

The institute, which collaborates with the Genomes to Fields Initiative to phenotype corn hybrid varieties across 162 environments in North America, also monitors a corn field lined with cameras mounted on poles. The solar-powered cameras sit above the corn plants and take photos every 15 minutes to watch each one develop over time.

The resulting data can be fed to AI programs to get a better understanding of how these plants grow and what genetic traits they share.

“Certainly it is going to help us understand — for example, with the photography — what is the genetic control of leaf angle. And then that would allow us to develop varieties with different leaf angles more readily,” Schnable said.

Schnable said it’s too soon for the developing technology to be widely deployed in fields or used for breeding purposes and that for now, the research funding is limited. But he believes private companies will use AI technology to develop their own products.

“These things do have significant impacts out there in the world,” he said.