The House Ag Committee is slated to take up seven pieces of legislation today, including some priority issues for the top two members of the committee.

Committee Chairman David Scott, D-Ga., is the lead sponsor on a bill to expand scholarships to historically Black land-grant institutions. The committee’s senior Republican, Rep. Glenn “GT” Thompson of Pennsylvania has a bill to research and manage the spread of chronic wasting disease in deer, elk and moose.

The bills also include the beef contract reporting bill we reported on Wednesday that’s aimed at increasing price transparency.

What’s next: An extension of the Livestock Mandatory Reporting law could serve as a vehicle for moving the contract library bill across the House floor, but industry groups may be reluctant to back that approach unless there’s broad congressional support.

“We would be a little bit concerned with anything that could weigh down LMR’s chances of getting extended because without LMR, the No. 1 transparency tool that we have available to us today automatically goes away, and that’s not something we are willing to play around with,” says Tanner Beymer, a lobbyist with the National Cattlemen’s Beef Association.

There’s a similar contract library bill in the Senate that pursues wider reforms.

The holdout: The House bill is backed by several groups, including the U.S. Cattlemen’s Association as well as NCBA. But a third producer group – R-CALF USA – isn’t on board. R-CALF CEO Bill Bullard tells Agri-Pulse that broader marketplace reform is needed first. “Adding transparency to a market that is dysfunctional will have little value,” Bullard said. 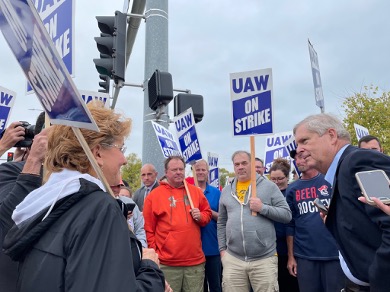 Ag Secretary Tom Vilsack visited striking workers at a John Deere plant in Ankeny, Iowa, on Wednesday. His spokeswoman tweeted this photo and quoted him as saying, “We need you – the folks who understand the value of hard work.”

Nicholas Burns, President Joe Biden’s nominee for ambassador to China, says the U.S. needs help from the European Union to confront Beijing over its aggressive trade tactics as well as its human rights violations and threatening behavior toward Hong Kong and Taiwan.

“We need to stand up together – Europeans and Americans – on the Uighur issue, on Tibet and on Hong Kong and Taiwan,” Burns told the Senate Foreign Relations Committee on Wednesday. “And we need to be together on trade because both of us together are victims of Chinese unfair trade practices. Think of the power of the EU, the U.S. and perhaps Japan, working together.”

Take note: Burns says he backs U.S. Trade Representative Katherine Tai’s plan to focus on getting China to fulfill its pledges under the “phase one” trade pact negotiated by the Trump administration.

While China has fallen short on promises to buy U.S. products, Beijing has mostly lived up to commitments to purchase U.S. ag commodities over the past two years. U.S. farm groups have been lobbying Tai to negotiate new purchase commitments in a “phase two” deal.

China’s trade record and membership in the World Trade Organization have been under review in Geneva this week.

During an online meeting Wednesday, there were some compliments for China expressed by members like Switzerland and Hong Kong, which has become increasingly under Chinese control. But the U.S., Australia, Canada, Japan, India and South Korea heaped criticism on Beijing, accusing it of unfair trade tactics and flouting WTO rules.

The U.S. said China had failed “to fully embrace the open, market-oriented policies on which the WTO is founded,” the official said.

A new study from the National Academies of Sciences, Engineering and Medicine recommends some steps the federal government and agriculture industry could take to prevent the spread of antibiotic-resistant bacteria. 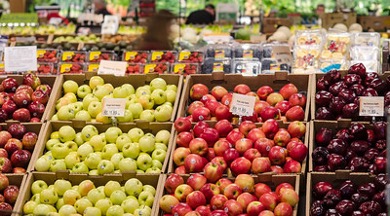 FDA has issued its latest annual report on pesticide residues in foods, this one covering testing that occurred during the 2019 fiscal year. Overall, about 1% of domestic samples and 11% of samples of imported products had chemical residues that violated EPA limits. Nearly three-quarters of the samples were taken from imports.

“These results are consistent with the trend of low levels of pesticide residue violations over the past 8 years,” the agency says.

FDA is doing some additional sampling this year for cabbage, lemons, lettuce, and soybeans. The extra testing is targeted to commodities with violation rates near 10% and imported foods where FDA has relatively few samples.

Hay prices have been on a steep rise since May as stocks continue to tighten amid drought conditions, according to a new analysis by Rabobank. Alfalfa prices rose 13.6% from May through August, and they are expected to go higher.

Governors in Wyoming, Montana, South Dakota and North Dakota have eased regulations on truckers to speed hay deliveries. Alfalfa exports this year are relatively flat – except for shipments to China, according to the report.

He said it. “As the ongoing COVID-19 pandemic has taught us, we must confront our vulnerability to pathogens in ways we haven’t before.” – Guy Palmer, a professor of public health of Washington State University who chaired the National Academies committee that studied the problem of antibiotic resistance.