Ahead of the United Nations Climate Change Conference, the California Air Resources Board (CARB) took stock of how far the state has come in reducing climate emissions. Several members took to heart the “code red for humanity” alert recently issued by the UN Intergovernmental Panel on Climate Change (IPCC) and said California must do more to lead the charge, particularly with reducing diesel and methane emissions.

“The intensity of this changing behavior will continue to affect livelihoods, agriculture, water systems and sensitive ecosystems,” said Nehzat Motallebi, an atmospheric scientist in CARB’s research division, during a 10-hour hearing Thursday. “The multibillion-dollar agricultural industry, which is one of the cornerstones of California, will be hard hit by extended drought and extreme weather events, which puts them in high risk.”

Motallebi warned to expect extreme droughts to continue throughout the 21st century, with less precipitation outside of atmospheric rivers and a long-term decline in groundwater levels affecting growers in the San Joaquin Valley as well as the Sierra Nevada and ecosystems that rely on the snow reserve for water. The IPCC report highlighted new research showing that forests devastated by drought lose the ability to store carbon over a much longer period than previously thought.

Globally, 20% of the greenhouse gas emissions come from the natural and working lands sector, due mainly to deforestation, land use change and agricultural emissions, according to Motallebi. To that end, California loses about 50,000 acres of farmland per year, mostly to urbanization, as the Newsom administration’s Strategic Growth Council discovered in 2019. When those lands are lost, the carbon stored in the soil and plant biomass is degraded or emitted as carbon dioxide.

This led CARB to include in its Climate Scoping Plan a goal for protecting agricultural lands from conversion, directing growth instead to existing communities while fostering more compact urban development that reduces vehicle miles traveled. CARB staff noted this effort in the proposed revisions for the Mobile Source Strategy, which the agency plans to update next summer.

In a discussion the same day on that strategy for vehicle emissions, board members recognized more needs to be done in reducing diesel pollutants.

“This is absolutely a public health crisis,” said Senator Connie Leyva of Chino, a newly appointed nonvoting member of the board, as she donned a t-shirt that read “Be Bold.” “We have to say ‘No’ to all of these pollutants. We have to be more aggressive.”

Leyva, a former labor leader in the hospitality industry, argued that more should be done to curb trucking pollution. Board member John Balmes, a physician studying the impacts of exposure to airborne pollutants, agreed, but raised concerns about investments in the infrastructure for the number of charging stations needed to fulfil the state’s new clean vehicle mandates. A recent report by the California Energy Commission found the state needs nearly 1.2 million charging stations by 2030 to meet passenger vehicle fueling demands and 157,000 chargers for support medium- and heavy-duty trucks. 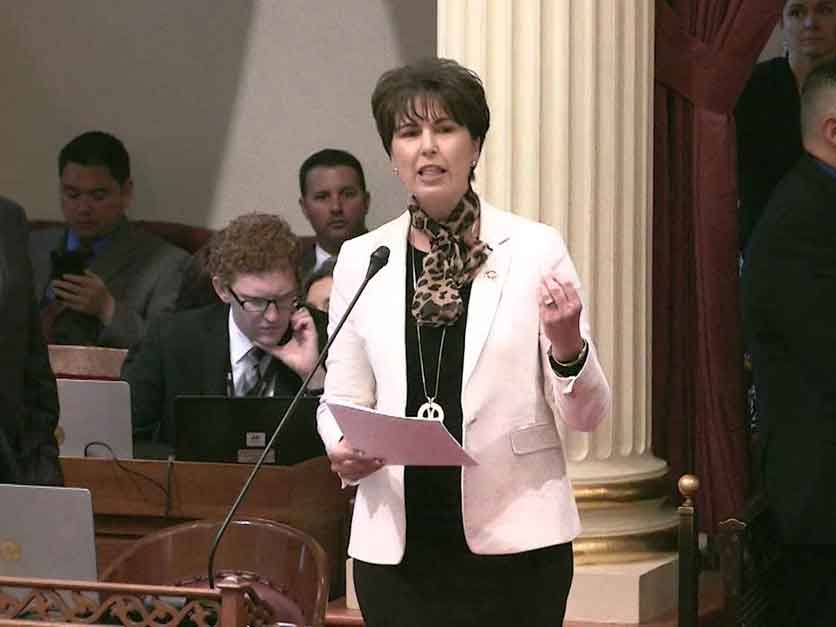 “How are we going to do all the charging for these heavy-duty, light-duty and medium-duty trucks that we need to get on the road?” asked Balmes.

He also called for requiring older diesel trucks to be retired early to accelerate the transition to zero emissions.

“But I don't even think that's enough. We have to figure out how to get the current diesel fleet cleaner,” he said. “As a board, as a state, we need to come to terms with the fact that it's going to take major investment, which I don't see yet.”

One battle over investment funding for methane reduction spilled over from legislative budget hearings into the CARB discussion. According to the nonpartisan Legislative Analyst’s Office, the state’s most cost-effective tactic yet for reducing greenhouse gas emissions has been deploying incentives grants for constructing dairy digesters, facilities that are also included in California’s Low Carbon Fuel Standard (LCFS) program.

Separately, a 2019 CDFA report stated that the use of dairy digesters, along with other methods, helped cut down about 25% of total 2013 dairy and livestock manure methane emissions, as part of the state's efforts to reduce methane by 40%. Another recent UC-Davis report suggests beef and dairy sectors can be climate neutral by 2050 by reducing methane emissions 18-32% and that new manure management techniques like anaerobic biogas digesters can play a critical role.

Yet a coalition of environmental justice groups took aim at dairy digesters last week when submitting a petition to CARB to remove them from the LCFS.

“CARB has inflated the greenhouse gas reductions associated with that,” asserted Brent Newell, an attorney with the group Public Justice, during the hearing. “This creates the illusion that factory farmed gas achieves negative emissions reductions.”

Newell argued the reductions would have happened anyway through incentives grants and funding from a settlement agreement over the Aliso Canyon natural gas leak. Newell and other advocates claimed the digesters generate harmful pollution for economically disadvantaged communities within the San Joaquin Valley.

“Dairies, especially those of the scale required to even generate or produce fuels, crowd thousands—sometimes more than 10,000 animals—in a single facility,” said Shayda Azamian, a policy advocate for the Leadership Counsel for Justice and Accountability. “This concentration of livestock has a massive and demonstrated impact on nearby residents, ranging from polluted air, water unfit for human consumption, and odor and flies so potent that residents often cannot leave their homes.”

The petition urges CARB to cease all credits for digesters and not authorize the natural gas generated from the facilities as an eligible fuel source for powering electric vehicles or gas-powered heavy-duty trucks.

Government affairs representatives for bioenergy and dairy trade groups called the accusations inaccurate and misleading, and urged the board to instead double down on grants for anaerobic digestion facilities.

“Reducing short-lived climate pollutants is the last lever we have left to avoid catastrophic climate change,” said Julia Levin, executive director of the Bioenergy Association of California. “Not only would that [petition] fly in the face of the science, which only underscores the urgency of reducing dairy methane and other methane sources, but it would contradict the plain language of SB 1383, the state's short-lived climate pollution law.”

Levin pointed out that the Biden administration and the European Union issued a joint statement in September recognizing that cutting methane emissions is “the single most effective strategy to reduce global warming in the near term and keep the goal of limiting warming to 1.5 degrees Celsius within reach.”

Dairy Cares Executive Director Michael Boccadoro added that California is now the world leader in reducing dairy methane emissions, after the state invested $700 million into the effort, with a 2-to-1 match from the industry that has brought the total investment to nearly $2 billion.

“[California] goes beyond the 30% global methane pledge signed by our own nation and the European Union and a number of other countries,” said Boccadoro. “Other states are looking to California leadership and beginning to follow our lead in developing programs of their own, including LCFS programs.”

In her presentation, Motallebi noted that six other states are also working to adopt California’s regulations on heavy-duty trucks, which would more than double the reductions. She said conversations like this drive down infrastructure and financing costs, and provide market certainty for reducing combustion engine sales.

Boccadoro argued the petition is asking CARB to ignore that opportunity for combating climate change and “abandon market-based approaches that are clearly working.” Without the LCFS credits, he said, dairies would not implement the projects, the industry would further consolidate after losing the added revenue source, and global livestock emissions would increase as production shifts to other regions of the country and world—in some places leading to further deforestation to make room for more livestock and feed production.

According to board member Dean Florez, the hearing’s debates over digesters and charging stations portrayed an uncomfortable level of uncertainty over the technologies the agency has been depending on to “make these very large leaps” in reducing emissions.

“We make big bets here. But it feels like we always have something to rely on, in terms of the science,” said Florez. “I'm not sure we have that today.”