The rainy season is kicking off with enough moisture to ease some Californians’ water worries, but the long-term outlook for agriculture remains one that calls upon farmers to maximize “crop per drop.” In the case of almonds, one of the state’s most profitable crops, it could take decades to transition from existing trees to others that can achieve similar yields with less water.

Many of the improvements will come on the input side — from irrigation strategies to nutrient management, but plant breeders and geneticists are also working to improve the trees themselves.

Devinder Sandhu, a research geneticist with USDA’s Agricultural Research Service at the Salinity Lab in Riverside, California, said drought has become a “driving force” behind his research and tolerance for salinity in the soil is one thing that can help a tree survive in lower water conditions.

“In coming years, salinity is going to become a lot more important because of drought,” he said, “because of climate change.”

During drought, salt that previously was pushed deep into the soil by rainwater is able to creep back toward the surface, he said.

“Our role here is to find some almond genotypes which can take more salt,” Sandhu said. In addition to less reliable rain, growers are planting almond trees out to the far edges of where they have historically been grown in California. That, too, can mean marginal soils and less water. Plus, Sandhu said there is an increasing desire to use treated wastewater or other recycled water for crops, which can sometimes be high in salt.

In a recent study, Sandhu and colleagues evaluated how a variety of different rootstocks reacted to different salt stressors. One of their discoveries, published in the journal Scientific Reports, found a specific amino acid called proline turned out to be a surprisingly good marker for identifying saline tolerance. The research, which also identified the top rootstock types to use in drier, more saline soils, didn’t delve into the genetic mechanism that accounts for salt tolerance. But that type of work is increasingly happening in various plants as the ability to sequence whole genomes has become more widespread and affordable.

That’s how a collaboration between New York University computational biologists and field ecologists from the Pontificia Universidad Católica in Chile led to discoveries about the relationship between plants that have evolved to survive in the Atacama desert and some of the world’s important crop plants. The decade-long investigation collected genetic information from all the plants in a specific study area of the desert and matched as many of those as they could with genetic “relatives” that are important crop plants — grasses, for example. Even tomatoes. One goal of the project, said Gloria Coruzzi, a senior author on the paper and a professor at New York University, is that eventually this basic research could be translated into breeding programs for biofuels, for example. The US Department of Energy helped fund the project. 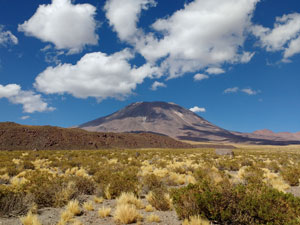 “They want to improve the growth of biofuel crops on marginal soils,” she said, so the most fertile soil can be reserved for edible crops.

Rodrigo Gutiérrez of Pontificia Universidad Católica designed the project and oversaw the field research. He said the families of genes that have been identified in both the desert plants and domesticated crops could provide geneticists with markers to use in a breeding program. Other researchers could “try to modify some of these genes in crops and see if they generate a more resilient crop,” he said.

That’s what Coruzzi’s lab has done on an experimental level, crossing some of the genetic material from the desert plants into samples of crop plants. “When we torture these (modified) plants,” she said, they do better than their unadulterated counterparts. If someone were looking to develop a more resilient crop, they could take just some of the most important genes for drought tolerance, for example, and breed those into an already acceptable crop variety. The idea would be to maintain all the desirable traits in the existing crop while also enhancing a specific survival strategy. And torturing plants, so to speak, is one way to find out whether they will survive in the future conditions that are predicted.

The Atacama desert study is not directly connected to plant breeding in California, but it’s contributing to the body of scientific literature that will inform future experiments.

“Can the plant adapt to a changing climate?” asks Tom Gradziel, a plant breeder and professor at UC Davis. “Inherently, almond has the capacity to deal with low water,” he adds, but the yields that California growers have come to expect won’t necessarily continue with the current trees in low water years. That’s why the rootstock research at the Salinity Lab is important. Most commercial almond trees are grafted onto rootstock from peach or apricot or even sometimes plum trees. The ability to “mix and match” rootstocks provides myriad options, Gradziel said.

But one of the hurdles is the time it takes to grow out an almond tree, on whichever rootstock, and see how it does under different natural conditions. Researchers can do that to a certain extent, in relatively low-risk environments, but ultimately, he said, farmers have to be willing to plant a few new trees and see how they do over five or 10 or 15 years.

“You’re not necessarily looking for a winner,” he said. “You’re looking to make sure it’s not a loser.” A tree that fails gets dropped, but trees that are successful will prompt farmers to gradually plant more of that type. With limited water increasing the price of doing business for farmers, Gradziel said “almonds is one of the few crops that’s actually valuable enough” to justify using that water. Still, growers need to find a profitable balance between input costs and yields.

“It’s an evolving solution,” he said, adding that he’s confident the almond industry is capable of changing as conditions require. He also said the collaboration of government and university researchers, industry and the growers themselves is critical to getting the science out of the lab and into the field. Getting feedback from the growers back to the scientists is equally important. In an area as big as California, he said testing needs to happen almost simultaneously in various regions with different soils and climates. Even though bringing a new almond variety to market can be a long-term investment, Gradziel wants to make sure the research is never too myopic to meet the different demands of the many farmers.

“I want to make sure that the breeding, selection options, that the growers have are diverse enough that whatever their particular need is, there will be something that satisfies it,” he said. In other words, it’s not one cultivar fits all.