Nations continued to bicker and complain in the days leading up to what was supposed to be the summit for reforming international agricultural trading rules, but the postponement of the World Trade Organization’s 12th Ministerial Conference gives WTO countries more time to lay the groundwork for consensus.

WTO Director-General Ngozi Okonjo-Iweala announced Friday that the Ministerial would be postponed indefinitely after a spate of new travel restrictions issued by countries to try to counter the new and fast-spreading omicron variant of the COVID-19 virus.

“Given these unfortunate developments and the uncertainty that they cause, we see no alternative but to propose to postpone the Ministerial Conference and reconvene it as soon as possible when conditions allow,” WTO General Council Chairman Dacio Castillo said just three days before MC12 was set to start on Nov. 30 and run through Dec. 3.

It’s unclear when MC12 will be eventually held, but it’s also unclear if Gloria Abraham Peralta, chair of WTO agricultural negotiations, will be able to come up with the blueprint to forge consensus for reform.

Peralta began circulating a new blueprint Nov 23 to hopefully accomplish just that at the Ministerial. It was the result of months of meetings, proposals and arguments between representatives of nations that span from South Africa to South Korea. 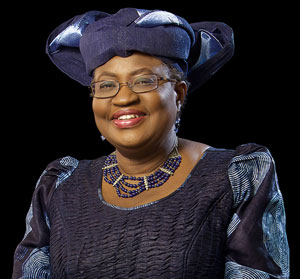 WTO Director-General Ngozi Okonjo-Iweala“Much of what’s in the chair’s text suggests that many of the issues were not ripe for decisions (at MC12) and for some issues there are still deep divisions,” says Sharon Bomer Lauritsen, founder of AgTrade Strategies LLC and former assistant U.S. Trade Representative for agricultural affairs and commodity policy.

Almost immediately, India reacted “with anger,” according to a trade official in Geneva.

WTO nations vowed eight years ago to come up with a permanent resolution on one of the most vexing agricultural issues facing the WTO: How to set rules on public stock holding, or PSH. It’s a common mechanism to make sure there is enough grain and other commodities in storage to protect against food shortages, but critics say countries like India and China also use it to subsidize farmers and export commodities like wheat and rice at below-market prices — a practice that lowers international prices.

India, which commonly pays above-market prices for crops to support farmers and then stockpiles or sells the commodities cheaply, has become one of the world’s largest exporters of wheat and rice.

But India, backed up by a long list of developing countries in the G33 Group, has been pushing for months for Peralta to adopt the nations’ proposal to bolster their ability to buy up the crops that their farmers produce. India has been under particular strain during the ongoing protests and demonstrations by farmers against any move by the government to take away the support.

India, a Geneva trade official said, accused Peralta of trying to completely do away with a G33 proposal on stockpiling — a plan that has not yet been made public.

Peralta abandoned any hope of an agreement on public stockholding earlier this month.

“Given the persistent wide gaps in members' views, this question has turned out to be the most difficult issue in the agriculture negotiations,” she said in her proposed text for a document that could be ratified at the Ministerial. “It has become increasingly evident that it would be difficult for an agreement on a permanent solution to be reached at MC12.”

Domestic farm support is another contentious issue on which Peralta attempted to provide a path forward that WTO countries could find common ground on.

The wording she was asking the nations to agree to wasn’t much more than a plan to continue to negotiate and included no specific reduction goals or even a time frame to get it done.

“We agree to continue negotiations on domestic support after MC12 with a view to negotiating modalities by MC13 to reduce substantially trade-distorting domestic support … [by 20XX] [within a time frame to be determined by members] in furtherance of the reform program under Article 20 of the Agreement on Agriculture,” the proposed document reads. “The negotiations shall be based on submissions by members and shall take into account and build on the progress made thus far in these negotiations.”

The proposal nevertheless turned out to be controversial.

While many nations frowned on the lack of ambition in the proposal by the chair of WTO agricultural negotiations, China and large blocks of developing nations in the G33 Group, African Group and Organization of African and the Caribbean and Pacific States (ACP) soundly rejected the proposal.

Not all WTO members appeared ready to reject the proposed MC12 agreement.

The U.S., a Geneva trade official told reporters, commended Peralta for having “courageously dared to draft a comprehensive text covering issues where progress has been stalled for years or even decades.” The U.S. and EU, the official said, vowed to support the proposal at MC12 before the four-day summit was postponed.

But the U.S. is perpetuating its own form of WTO roadblock. The Biden administration — like the Trump administration before it — is refusing to allow the WTO to appoint appellate court judges.

On Monday, 122 nations again called for the start of the process to appoint appellate judges, and the U.S. again blocked it. A trade official monitoring procedures in Geneva stressed this was the 48th time the U.S. has blocked the process that has hobbled the WTO’s dispute settlement function.

The U.S., the official said, “continues to have systemic concerns with the appellate body, which it has explained and raised over the past 16 years and across multiple administrations. The U.S. said it believes that WTO members must undertake fundamental reform if the dispute settlement system is to remain viable and credible.”

It’s one more issue that has no chance of being resolved this year after MC12 was postponed, Didier Chambovey, chair of the WTO Dispute Settlement Body, told the countries’ representatives in Geneva on Monday.