California farmers are embracing new technologies to help them meet regulatory pressures while remaining globally competitive and saving labor costs. Yet worker protection laws remain a hurdle, along with developing the workforce needed to operate and maintain complex new machinery.

“I believe the next generation of agtech can completely transform California's rural economies,” said Gabriel Youtsey, the chief innovation officer at UC Agriculture and Natural Resources. “The reality is there are many high-paying, rewarding careers in the ag industry.”

Speaking at an Assembly informational hearing last week on workforce needs for the future of agricultural technology, Youtsey said that innovations like artificial intelligence, cloud computing and CRISPR gene editing “demonstrate that agtech is here to stay” and that the workforce will look different in the coming years.

The state lawmakers were seeking policy ideas for bills to introduce in the upcoming session that could help to speed up that transition while freeing up more educational opportunities for workforce development.

In resisting Trump, California lawmakers could put agriculture in a regulatory pinch
Farmworkers, climate and wildfires are the focus of new legislation in California
State says Biden will invest in dairy methane reduction, but not California

One direct policy request came from executives at Monarch Tractor, who singled out a controversial code within the state’s department for occupational safety and health, known as Cal/OSHA. Monarch’s chief of staff, Jake Winters, described the workplace safety code as the primary regulatory roadblock to the larger adoption of the company’s autonomous tractor systems.

“It doesn't account for technological advances that have happened over the last 50 years,” said Winters. 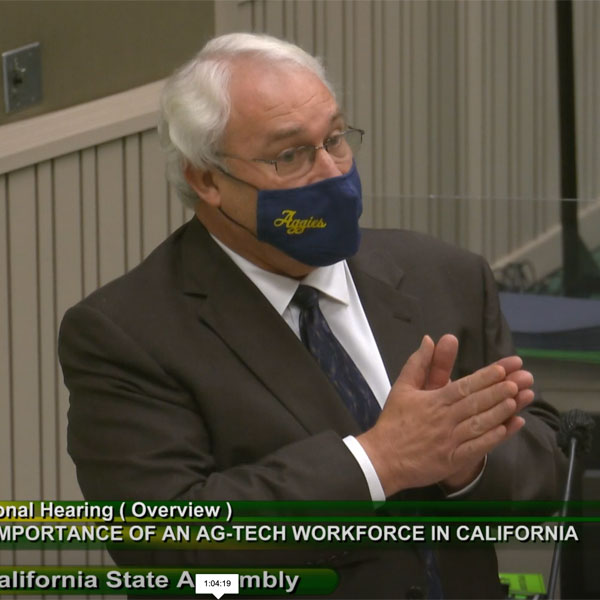 The regulation requires an operator to be stationed at the controls for any self-propelled equipment. Winters argued the code dates to the 1970s and relates to outdated equipment. Two years of educating Cal/OSHA on deploying driverless technologies in a safe way led to temporary approval to run the tractors on three sites and only for a single crop type. Every single farm would need such an exemption to operate the autonomous system, he explained.

“We are on private property when we're looking at farming agricultural landscapes. This isn't a freeway or the city,” said Winters, arguing the technology actually protects workers from rollovers.

The regulation drew further criticism from Michael Miiller, who directs government relations for the California Association of Winegrape Growers and saw driverless cars and trucks as clearly in the state’s future.

“In California that technology is virtually unavailable,” said Miiller. “In the age of remote-controlled spaceflight, this regulation seems uninformed and nonsensical.”

Along with “fixing” the Cal/OSHA regulation, Miiller urged more support for state colleges and cooperative extension in researching new technology, training workers and educating the industry. He argued that nonprofits seeking to fill a void in career training through apprenticeship programs “are faced with a burdensome and unnecessary regulation that requires them to register as a farm labor contractor.”

Growers have been challenged with finding enough workers, despite paying upwards of $30 an hour during harvest, he explained, adding that federal immigration policies, the physically demanding nature of the work, little upward job growth and skyrocketing housing costs have contributed to the problem. He described mechanization as a life saver for farmers, reducing labor needs by as much as 80%. The next generation of technologies, he argued, will reduce water and pesticide use as well as the carbon footprint, while increasing yields and jobs in California—opportunities that will provide workers with transferable skills and upward mobility.

Don Cameron, a Fresno County farmer and president of the State Board of Food and Agriculture, said electric tractors present another opportunity in being able to store low-priced electricity to push back onto the grid when prices are high, reducing energy costs.

Assemblymember Jim Cooper of Elk Grove recognized that California, as one of the top wine producers in the world, is competing with jurisdictions that place far fewer constraints on farmers.

“Oftentimes, those countries actually subsidize the industry,” responded Miiller. “They get marketing money from the government, and they get assistance or research that California doesn't get. And it's a big competitive disadvantage.”

California has an opportunity to be the global landing spot for agtech innovation, according to Dennis Donohue, who directs the Western Growers Center for Innovation and Technology. He has brainstormed an idea with CDFA Secretary Karen Ross to take “a year of focus” to determine the gaps in workforce development.

Donohue is hosting four conversations at community colleges throughout the state on how to recruit more students into agtech jobs. While the listening tour is only halfway through, it has already become clear that a teacher gap needs to be addressed, which entails bridging disparate backgrounds, such as irrigation expertise with robotics engineering.

Asm. Cecilia Aguiar-Curry of Winters pushed for more funding at the high school level, with agricultural technical education classes to bring in “some of those kids that get lost in the shuffle.”

As detailed by Cameron, the state must fill a long list of worker needs as technologies progress. These include interpreting aerial crop photos to determine moisture stress; programming and monitoring laser weeders; and monitoring water use for compliance with the Sustainable Groundwater Management Act.

“It's about replacing the hoe with lasers, replacing hand harvest with robotics. It's about automating the farm, and it's about precision farming,” said Cameron, adding: “We need to make jobs in agriculture attractive.”