To do so, dairy farmers and ranchers will need more tools, such as feed additives to reduce emissions and ways to measure those reductions. Current research efforts and at least one pending application at the Food and Drug Administration could go a long way toward meeting the goal.

The colorless, odorless gas, chemically identified as CH4, has about 80 times more warming potential than carbon dioxide and makes up about 10% of GHGs emitted in the U.S., according to the Environmental Protection Agency.

A little more than a quarter of that methane comes from enteric fermentation — part of the digestive process in ruminant animals.

More than 100 countries have committed to reducing methane emissions by 2030 by 30% below 2020 levels. Much of the focus will be on the oil and natural gas sector, for which EPA recently proposed new regulations, but the dairy and beef cattle industries will also have a large role to play.

At the recent climate conference in Glasgow, Scotland, Ag Secretary Tom Vilsack and Secretary of State John Kerry both brought up the potential of feed additives to significantly cut emissions. Kerry focused on asparagopsis, a red seaweed that has been touted as having the potential to reduce emissions by 80% but for which research is still ongoing.

Vilsack spoke more generally, but also highlighted the role of feed additives and insisted the U.S. could cut methane emissions without reducing beef consumption, a frequent target of climate activists. 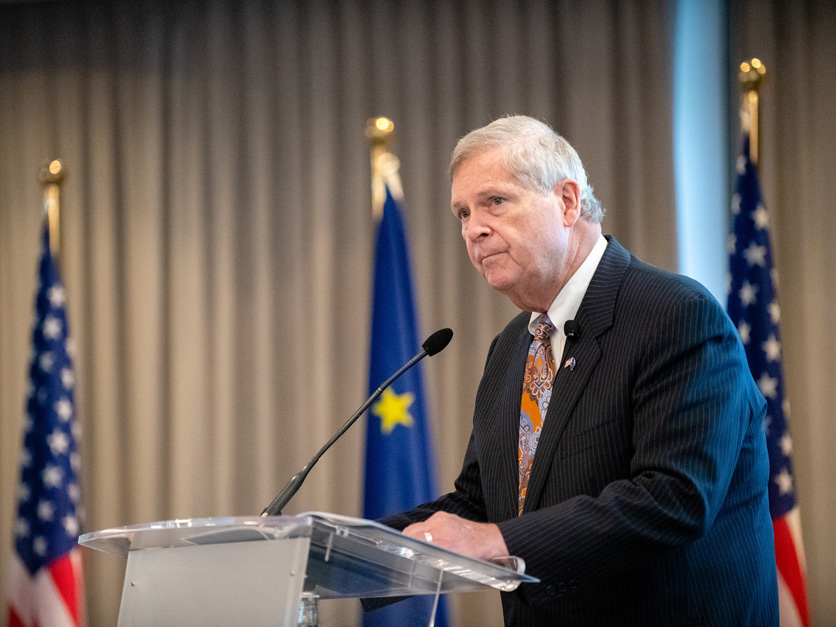 One effort, the Greener Cattle Initiative (GCI), is seeking to jump-start research in a variety of areas to tackle the problem of cow burps, which are the main source of methane from cattle.

The initiative has been identified as an “innovation sprint” by AIM for Climate, an international effort launched by the U.S. and the United Arab Emirates and officially announced at the Glasgow climate summit.

The GCI will focus on development of feed additives and supplements that inhibit enteric methane emissions and “feed ingredients that alter metabolic pathways” to reduce those emissions, as well as selection traits and programs that allow breeding of low methane emitting cattle, FFAR says.

And there’s more, says Tim Kurt, scientific program director at FFAR. Farmers will have to be able to measure methane emissions. “At this point, there's really nothing out there that’s easy to use,” he says. “We can't yet actually quantify enteric methane emissions on farms in a commercial setting.

“The technology for measurement and prediction right now exists, but it's usually laborious and doesn't allow for high throughput of animals,” says Juan Tricarico, vice president of sustainability research at the Innovation Center for U.S. Dairy.

The GCI plans to award $5 million for research projects, perhaps as early as next spring.

But another area that needs attention, they and others in the field say, is the regulatory process for approving products that could reduce emissions.

One such product, Bovaer, can reduce emissions by 30% from dairy cows and 80% from beef cattle, according to its developer, Dutch conglomerate DSM.

DSM has had an application for the animal drug at the Food and Drug Administration for four years and counting. The approval process can take as long as 10 years.

The product has been approved for use in Brazil and Chile and received a favorable opinion from the European Food Safety Authority last month, which “progresses the application to the final stage of approval from the European Commission Standing Committee on Plants, Animals, Food and Feed,” DSM said.

Also last month, the world’s largest protein company, JBS, said it would be incorporating Bovaer into its production chain.

“The pressure is now going to be on the regulatory space to figure out a new mechanism, a new pathway” that allows FDA to consider environmental claims, Tricarico said.

The Breakthrough Institute, which focuses on technological solutions to environmental problems, recommends that FDA regulate methane-reducing animal products as feed additives or ingredients. Bovaer is being regulated as an animal drug.

FDA won’t talk about the status of animal drug applications or even confirm that it has received one, but spokesperson Anne Norris says the agency’s Center for Veterinary Medicine “is interested in encouraging new product development under our new animal drug or our animal food additive review process and continues to explore innovative approaches for evaluating new products to help increase the availability of safe and effective products for animals.”

Louise Calderwood, director of regulatory affairs at the American Feed Industry Association, wrote in a recent blog post: "It is time to broaden the regulatory roadway for animal food marketing claims to accommodate the expanded understanding of the physiology of the gastrointestinal tract. The CVM is long overdue in revisiting its narrow path for regulatory approval of animal food ingredients, and food companies are starting to take notice.

Vilsack said at the Ag Outlook Forum in Kansas City in September that he thinks FDA “is more open than they have been to conversations, and hopefully that leads to not only the speeding up their current process but encourages them to think differently and to think broadly.”

DSM Co-CEO Geraldine Matchett said last month on CNBC that a quarter teaspoon of Bovaer “will not substantially impact the production or the cost of production. There is really no reason to delay it, except a rigorous scientific process is required. We know that FDA is a very rigorous institution.”