Editor’s note: There will be no Daybreak during the weeks of Dec. 20 and Dec. 27. Daybreak will return, Monday, Jan. 3. Check Agri-Pulse.com for news developments during the holiday period.

The White House is doubling down on blaming meatpackers for higher food prices. White House press secretary Jen Psaki was pressed at a news conference Tuesday to say how corporate greed had caused inflation. She immediately cited the “greed of meat conglomerates.”

“That is one area where when people go to the grocery store and they're trying to buy a pound of meat, two pounds of meat, ten pounds of meat, the prices are higher,” Psaki said. In the view of President Biden and Agriculture Secretary Tom Vilsack, the price increases amount to “corporate greed,” she added. “You could call it jacking up prices during a pandemic.”

Meatpackers note that the industry was highly consolidated long before the latest spikes in retail prices, which the industry attributes to strong consumer demand.

Robert Califf, Biden’s nominee to run the Food and Drug Administration should have little trouble getting Senate confirmation, according to the top Republican on the Senate Health, Education, Labor and Pensions Committee, Richard Burr of North Carolina. Califf won’t get the vote, however, of Sen. Bernie Sanders, I-Vt., who says Califf is too close to the pharmaceutical industry.  Califf served as FDA commissioner during the final year of the Obama administration.

Take note: During Califf’s confirmation hearing Tuesday, Sen. Tammy Baldwin, D-Wis., pushed him to commit to tightening enforcement of standards of identity for dairy products to prevent their use for plant-based alternatives.

Baldwin asked: “Will you commit to finalizing guidance without delay and providing a fair outcome that preserves the use of dairy terms for dairy products and that resolves this matter once and for all?

Califf didn’t quite promise that outcome: “There's almost nothing more fundamental about safety than people understanding exactly what they're ingesting, so I am committed to making this a priority.”

Antimicrobial sales down in 2020, FDA says

Sales of medically important antimicrobials in food-producing animals declined about 3% from 2019 to 2020, according to FDA.

“While sales data … do not necessarily reflect the actual use of antimicrobial drugs, sales volume observed over time can be a valuable indicator of market trends related to these products,” FDA said.

Some 82% of the usage in food animals is in cattle and hogs. Turkeys account for 12% and chickens, 2%.

The U.S. Soybean Export Council has racked up a major win in its effort to prove to European buyers that the U.S. can prove its soybeans meet high sustainability standards. The European Compound Feed Manufacturers’ Federation has certified USSEC’s Soy Sustainability Assurance Protocol, or SSAP for short.

“The certification provides continued peace of mind for buyers in 27 countries in the EU and beyond that U.S. Soy purchased under SSAP meets or exceeds FEFAC criteria for responsibly produced soy,” says USSEC. “And with about 80% of U.S. soy exports to EU countries certified under SSAP, we know that validation is important to our customers.”

USSEC launched the SSAP program in 2013 with the goal of proving to buyers in environmentally conscientious countries that U.S. soy will allow them to make sustainability claims on the products they produce.

Biden urged to back renewal of trade negotiating authority

U.S. dairy groups are pressing the Biden administration to support the renewal of the president’s trade promotion authority, which means Congress can’t amend a trade agreement that is submitted for approval.

The National Milk Producers Federation and the U.S. Dairy Export Council issued a statement Tuesday to amplify growing demands from the ag sector and Capitol Hill that the White House consider new trade pacts. TPA would need to be renewed first. The authority expired July 1.

Speaking on a Tuesday webinar hosted by Farmers for Free Trade, United Dairymen of Arizona CEO Robert Chesler said TPA “is critical to realizing fully the potential of dairy markets in places like Vietnam, Indonesia, the United Kingdom and other major dairy purchasers.”

The Labor Department today is publishing in the Federal Register the minimum wage rates for H-2A workers as determined by a USDA survey in November of farmworker pay.

The adverse effect wage rates for H-2A rates vary by state and region, from $11.99 an hour in the Southeast to $17.51 in California.

For more on the rates, read our weekly Agri-Pulse newsletter. 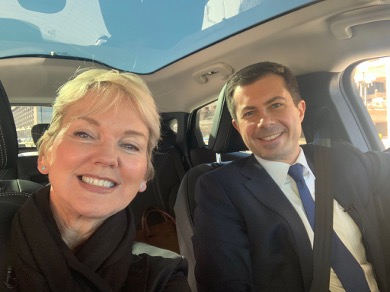 He said it. “Buckle up! We're kickstarting an American EV future." - Transportation Secretary Pete Buttigieg, on his Twitter feed with a photo of himself in a vehicle with Energy Secretary Jennifer Granholm (above).

Buttigieg and Granholm signed a memorandum of understanding to create a Joint Office of Energy and Transportation to build out a national electric vehicle charging network.