The Biden administration is moving ahead with its plan to finance new meat processing capacity. Ag Secretary Tom Vilsack tells Agri-Pulse that USDA will be careful to provide support for a range of plant sizes and ensure that the facilities are located where they are needed.

“We're not going to just fund every application,” Vilsack said. “There's going to be the need to show the viability of it, to show the market opportunity, all of that.”

Some $150 million is being provided to an estimated 15 projects this spring, and another $225 million will be rolled out in summer 2022, the White House said Monday in announcing the administration's latest plan to address packer concentration. 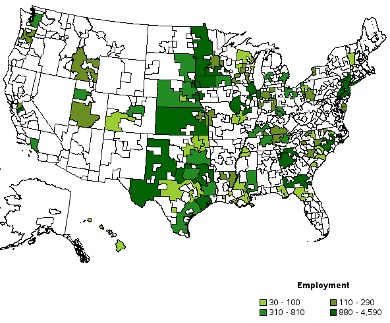 Subsidies can make farming greener, but run afoul of WTO

The billions of dollars that the Biden administration wants to pour into climate-smart farming practices could put the U.S. in conflict with World Trade Organization limits on trade-distorting subsidies, according to a new analysis by Joe Glauber, a senior research fellow at the International Food Policy Research Institute and a former USDA chief economist.

There are several programs like the Conservation Reserve Program that can be used to reduce carbon emissions and are generally not considered trade-distorting, says Glauber. But programs that pay farmers to use climate-friendly practices could put the U.S. at odds with international rules, he believes.

He says WTO rules may need to change, given that “increasing agricultural productivity is one of the most effective ways to address climate change.”

“Addressing climate change in a way that ensures meeting the UN Sustainable Development Goals will pose significant challenges in the years ahead,” he writes. “A broader consideration is whether the exigencies of climate change require rethinking rules underlying the global trading system, particularly those governing domestic support.”

The Democratic-controlled Senate is back in action this week, and there are reports that Sen. Joe Manchin may be willing to negotiate a deal on a scaled-back version of the Build Back Better bill. The BBB bill contains $90 billion in ag and nutrition provisions.

But Democrats are going to keep the focus this week on the one-year anniversary of the Jan. 6 Capitol riot while trying to make the case for passing their voting rights legislation in coming days. In a Dear Colleague letter, Senate Majority Leader Chuck Schumer, D-N.Y., raised the possibility again of carving out an exception to the filibuster for the voting legislation.

Keep in mind: Neither Manchin, D-W.Va., nor Kyrsten Sinema, D-Ariz., has given any indication that they would supporting ending the filibuster change.

There are some cautionary notes mixed with good news about the farm economy in the Federal Reserve District that covers Texas, northern Louisiana and southern New Mexico.

Demand for agricultural loans in 2021’s fourth quarter increased for the first time since the third quarter of 2015, and the loan repayment rate continued to increase. “Loan volume decreased for feeder cattle loans, dairy loans and crop storage loans compared with a year ago,” the Dallas Fed says.

Values for both irrigated and dryland acreage as well as ranch land rose in the fourth quarter, according to the survey.

Devin Nunes is officially retired as of Monday from the House seat representing the San Joaquin Valley. Nunes, who took a job as CEO of former President Trump’s new media company, was in line to chair the powerful House Ways and Means Committee after the mid-term elections — if the GOP were to win a majority.

Nunes’ family has long had a dairy farm in Tulare County and in 2007 added an operation in Iowa. He had served in the House since 2003. 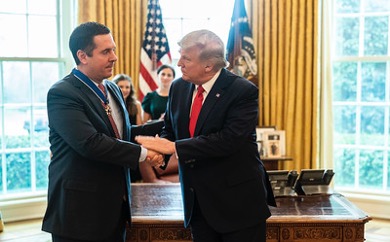 Nunes with Trump in January 2021

Also on Monday: A federal judge in California rejected a request by Rep. Jeff Fortenberry, a Nebraska Republican, to dismiss an indictment brought against him for lying to federal investigators about illegal contributions to his 2016 campaign.

The order sets the stage for a trial next month. Fortenberry had been the top Republican on the House Ag Appropriations Subcommittee before being indicted in October.

Argentine farmers are still very concerned that the country’s approval – the first ever – of a genetically modified wheat seed could hurt exports, so the government is promising to enforce strict controls over movement, storage and planting, according to USDA’s Foreign Agricultural Service.

The Argentine government has created a special audit commission under the National Seed Institute to monitor all aspects of the commercialization of the biotech wheat developed by the Argentine company Bioceres, but tensions are high because neighboring Brazil has only partially approved it. Brazil approved in November the importation of flour made with Bioceres’ HB4 wheat.

She said it. “Yes indeed @ChuckGrassley.” - White House spokeswoman Emilie Simmons, responding to Sen. Grassley when he tweeted a request for the White House to support his bill that would restrict beefpackers' procurement practices.

“We're encouraged to see bipartisan legislation in Congress and will work closely with the House and Senate to make cattle markets fairer and more transparent,” Simmons continued. Her response to Grassley was retweeted by White House Chief of Staff Ron Klain.

But Ag Secretary Tom Vilsack tells Agri-Pulse it’s important to ensure the bill wouldn’t unduly disrupt cattle markets. “If you go too far, then you basically create a lot of uncertainty in the market, and you don't want that either,” he said.