Robots, self-operating tractors and electric track loaders were among the new innovations showcased at the recent Consumer Electronics Show (CES) in Las Vegas, indicating the emergence of an automated and electric focus for the machines of the future.

John Deere’s fully autonomous and soon-to-be-on-the-market 8R tractor, Naïo Technologies’ weeding robots, Bobcat’s fully electric T7X Compact Track Loader and other innovations are indicative of the types of vehicles that will continue to be rolled out in the years to come.

These trends were not hard to see coming. Several machinery companies, including John Deere, Case IH and AGCO, have been developing and testing autonomous capabilities in farm equipment for years and President Joe Biden has made adoption and advancement of electric vehicles one of his main priorities.

But the reveal of these products at CES marks a notable step toward commercialization as companies like John Deere and Bobcat announce plans to bring more autonomous and electric vehicles to the marketplace, though their success will depend on whether producers choose to invest in the technology.

“It's not five years out, it’s not 10 years out. It's today,” Jenny Ose, the director of marketing and shared services for John Deere’s Ag and Turf Division, said about Deere’s autonomous tractor, which will become available to producers later this year.

The machine, officially announced at a press conference last week, is built from John Deere’s flagship 8R tractor. Six stereo cameras and two GPU processors were then added, along with other parts to help it function without a driver.

The tractor can cover over 300 acres in 24 hours, though it will need to be refueled every eight to 10 hours, Ose said.

For now, the machine is only capable of doing autonomous tillage, though farmers can still use it manually to perform other tasks. However, according to Ose, the company will be able to upgrade the base model as more development takes place.

“We're going to continue to automate more jobs with this autonomous tractor and eventually we're going to look at more tractors, look at combines, sprayers,” she said. “This is just the beginning.”

Ose said the tractor would go for around $500,000 if it were to be sold today, but the true price has yet to be determined. For comparison, a new non-autonomous John Deere 8R tractor can range from $317,374 to $517,548.00 depending on the model, according to the company's website.

Ose said the company is currently working with dealers and customers to determine the best business model for an autonomous tractor and should have more concrete pricing plans before tillage time in the fall.

“We have to look at what makes sense for our farmers, because they don't want to buy something that's out of date in six months,” she said. “That's not good for anybody.”

The company hopes to produce “less than 50” by the end of 2022 and even more next year. The current plan is to have full-scale production at Deere’s Waterloo, Iowa, plant in 2024.

While John Deere has been working on developing full-size self-driving tractors, Naïo Technologies has been developing much smaller robots that can be used to perform tasks like weeding on specialty crop operations. The company is based in France and has over 250 machines deployed worldwide. However, in recent years it has been focused on expanding its presence in the U.S., where 28 of its robots are already being used on operations.

Currently, there are three main robots that the company has developed: Oz, DINO and TED. Oz, a 51-by-18.5 inch electric robot can autonomously hoe, weed, make furrows and seed fields. The machine can travel at just over a mile per hour and has a battery that lasts up to eight hours.

“That’s a working model,” said Christian Obed Melendez, Naïo’s director of sales for North America, as he pointed to a dusty Oz that rolled across the convention floor. “This isn’t a fancy prototype that we made to dance all pretty at CES. He’ll literally be out to work when the show’s over.”

DINO, on the other hand, is much larger, with a body just under 9 feet and a width of between 8 to 10 feet, depending on how the machine is set up.

The robot primarily specializes in weeding and uses GPS and sensors to navigate the field with a 2-centimeter precision range. It also is battery operated, can travel up to 2 miles per hour and can work up to 10 acres a day.

TED, the third robot, was built to operate in vineyards. The six-foot-tall machine can drive over the tops of vineyard rows and with attachments such as blades, disks and plows.

The robots were originally developed in Europe. Because the machines are smaller than some of the farm equipment currently operating on farms, Melendez said they help add maneuverability in tight spaces like caneberry fields. 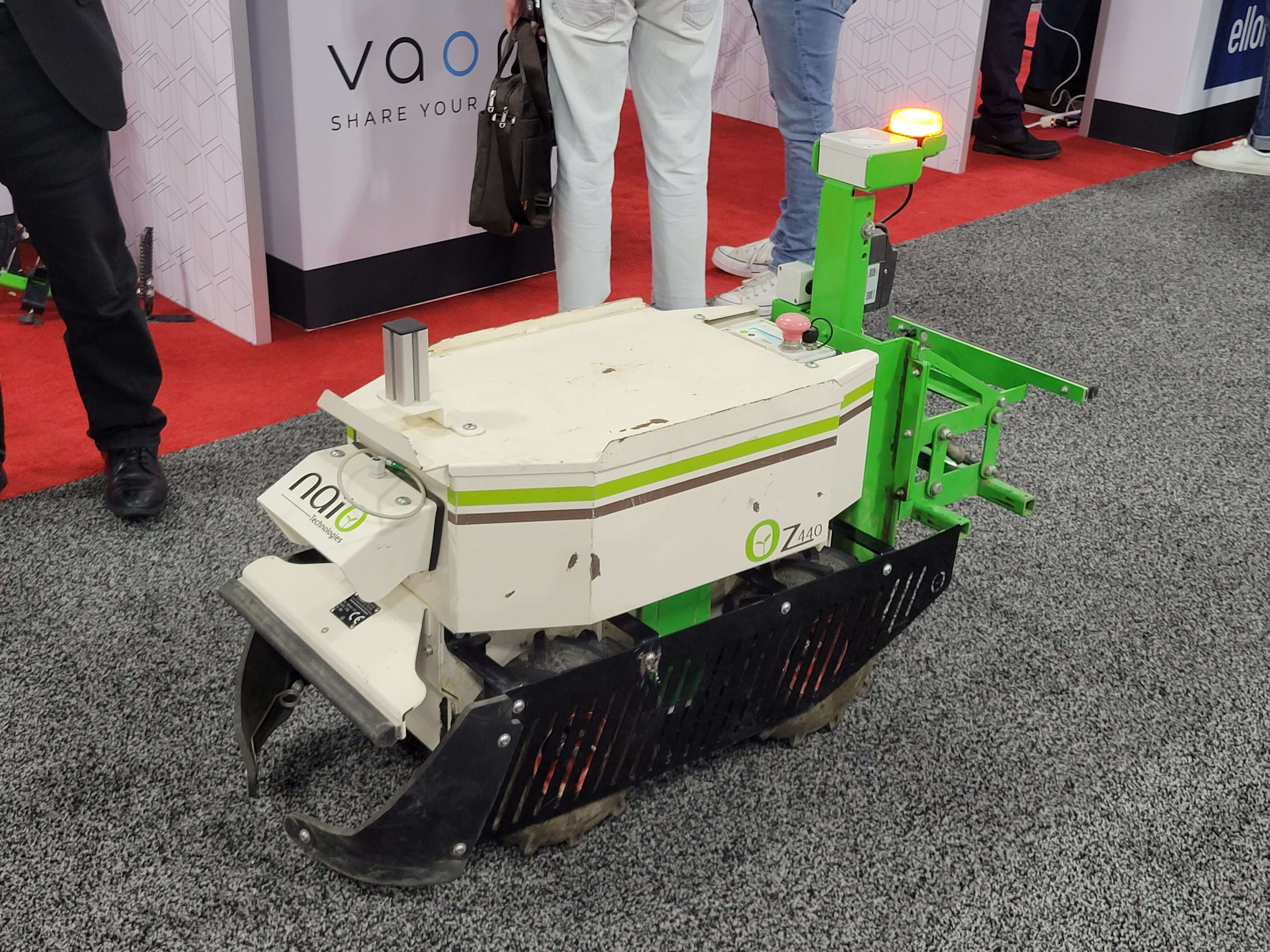 However, Melendez said they work just as well for large growers in places like California, where one operator can use 5 or 6 robots at a time.

“It's not just for the small grower,” he said. “It is specifically designed for the large growers and that's important.”

“We actually have quite a few farmers using it because they're there on a service basis, so we'll take the robot and do the weeding,” Melendez said.

The bots currently operate using radio transmitters, but the upcoming models will use wifi and be monitored through an app. Additionally, several implements can be added to the robots to allow them to perform more tasks.

“There's really no limitation for what you need it to do,” Melendez said. “You can really adapt.”

Electric vehicles have been in the spotlight recently as a way to meet emission reduction goals by relying less on fossil fuels. However, there’s still a lot to be explored when it comes to electric farm equipment, something a company representative expects will change.

“I think alternative power sources [are] going to be desirable moving forward, especially with regulations on diesel engines,” Daniel Wood, an acceleration specialist at Bobcat, told Agri-Pulse. “They're only getting stricter, so people are going to want something that delivers the power density they're looking for without having to add things like a DEF (diesel exhaust fluid) system or just be limited on horsepower.”

The T7X uses a 62-kilowatt lithium-ion battery, which Wood says can last for four to six hours of continuous use, depending on the task.

The track loader does not have a hydraulic system, like most others. Instead, it uses an electric drive system made up of electric motors and ball screw actuators.

Wood said because this T7X does not have all of the parts that a diesel machine would require, it is simpler to repair. He said it is about “10-times less expensive to maintain in a year compared to a diesel machine.”

Wood said the company is expecting the batteries to last long enough for the customers to swap out their old machine with a new one. However, he said they didn’t have a projection on how many years that was expected to be.

According to Wood, Doosan Bobcat will be doing a limited launch this year, but those machines will be going to the equipment rental company Sunbelt Rentals. Some of the machines may be on the market by the end of this year, but it might also be next year before they become available.