A Senate committee has struck down a Republican measure to establish a funding account for water storage and conveyance projects, to the disappointment of the Western Growers Association and others who supported it. This follows the demise of a Democratic measure in 2021 that would have set aside nearly $800 million for conveyance projects.

As the drought progresses into a third year and reelection campaigns ramp up for November, the debates are drawing lawmakers into uncomfortable arguments over the state’s role in storing and delivering water while protecting endangered species. At the center of the debate is a proposal for building the Sites Reservoir Project to supplement supplies in Northern California—a region that supports most of the state’s water delivery needs and has been hit hardest by the drought.

The proposal passed a crucial milestone in January as part of the lengthy approval process for administering infrastructure dollars from the Proposition 1 water bond that passed in 2014. Yet the project authority for the proposal is just beginning to undertake one of its biggest challenges for Prop. 1. It is developing an environmental impact plan that must meet essential criteria for ecosystem benefits as determined by the California Water Commission. An earlier set of commissioners downgraded the funding allocation for Sites due to concerns over environmental benefits, and the current commission is looking to scrutinize the plan in much more detail later this year.

Democrats in the Senate Natural Resources and Water Committee were quick to point that timeline out in a hearing last week.

“It does feel a bit premature given that the environmental permitting process is not even completed yet,” said Senator Henry Stern of Canoga Park, in debating Senate Bill 890. 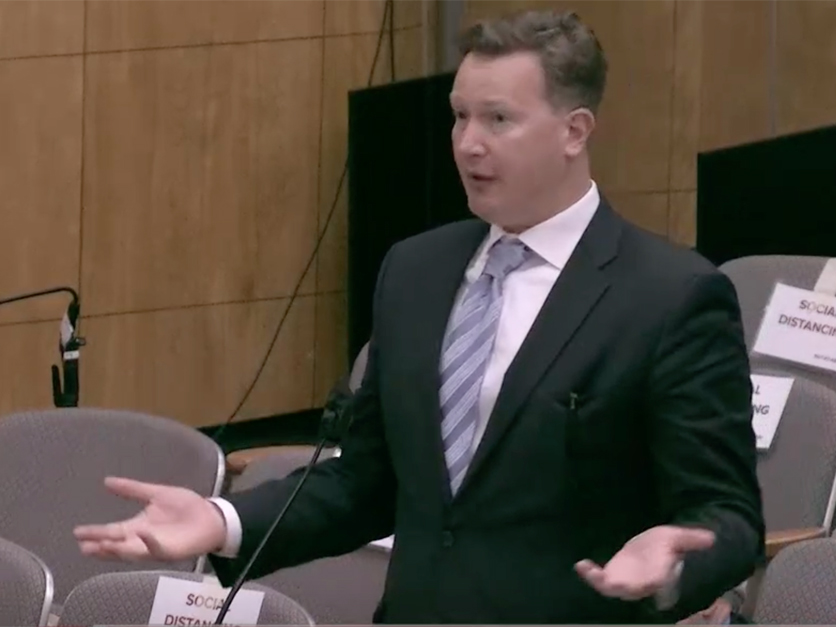 Stern, who chairs the committee and was an environmental attorney before taking office, worried that the bill specifically detailed funding of up to $2.6 billion that could go to constructing Sites and argued it “doesn't seem like a fair allocation of obligations.” He noted that the federal government has already committed $100 million.

The bill’s proponents, however, argued it would not divert funding from drinking water projects or allocate new funds to Sites, contrary to a legislative staff analysis that portrayed the measure as seeking additional money for the project.

Stern also worried that last year’s infrastructure measure, SB 559 to fund repairs to several canals in the San Joaquin Valley, was likewise too specific to the Friant-Kern Canal—though it included two other conveyance systems.

Stern, along with five other Democrats who voted against the measure, sided with arguments made by Doug Obegi, an attorney for the Natural Resources Defense Council, who pointed out in his testimony that NRDC had supported Prop. 1 because it promised public benefits like environmental protections and flood control.

“SB 890 violates this promise of Prop. 1 and the beneficiary pays principle,” said Obegi, as he reframed an argument that progressive lawmakers had frequently levied against SB 559 and applied it to Sites. “State taxpayers should not subsidize this environmentally destructive project.”

Obegi also objected to perceived earmarks for canal repairs, arguing that the farmers who damaged those canals through subsidence should pay for the repairs, despite a settlement over cost shares between those farmers and the Friant Water Authority.

“We need to restore salmon runs, not fund projects that would worsen the current crisis,” said Nelson, who urged lawmakers to instead support water conservation, floodplain restoration and groundwater recharge—though proponents have argued that Sites would actually expand recharge opportunities by capturing more flood flows.

Republican Sen. Andreas Borgeas of Fresno, one of two primary authors of SB 890 and the Senate Agriculture Committee chair, responded to Nelson’s argument that urban Californians should not have to pay taxes that go to a rural project.

“That undermines the pillar of our California system,” said Borgeas. “We all—across [the] state of California—pay in to infrastructure, because we do benefit collectively. And I would argue we benefit individually, when you go shop at your supermarket and you have fresh produce available.”

He argued the state is already legally obligated to finance the Prop. 1 water storage projects because voters passed the measure and lawmakers cannot redirect those funds to conservation projects. He pleaded with the committee to allow amendments to the bill before voting it down, granting time for Borgeas and Republican Sen. Jim Nielsen of Red Bluff to revise the language around Sites as a political compromise.

Like Borgeas, Nielsen shared deep frustration with the commission taking more than eight years to approve Prop. 1 funding, and he framed the measure as an opportunity to elevate the issue of water supply within the Legislature.

As an assemblymember, Nielsen had worked with the Schwarzenegger administration in developing initial legislation to put Prop. 1 on the ballot. Senate President pro Tempore Toni Atkins, who was then speaker of the Assembly, authored the measure alongside Asm. Anthony Rendon of Lakewood, who now leads that arm of the Legislature.

He added that the bill had achieved the goal of uniting other parts of the state in addressing water scarcity. That was evident in a supporting vote by Sen. Ben Hueso, who represents Imperial County and a portion of San Diego County. Hueso worried the state may not have enough storage to prevent reservoirs from going completely empty during the drought and should invest in water storage infrastructure in an environmentally conscious way.

“It behooves the Legislature to take this issue very seriously,” said Hueso. “This is going to continue to plague this state for many years to come.”

He called it sad that then-Gov. Jerry Brown had supported Prop. 1 when it passed but predicted none of the dams would ever be built.

Two other moderate Democrats, Sen. Anna Caballero of Salinas, who once led the Assembly Agriculture Committee, and Asm. Adam Gray of Merced joined as co-authors on the measure.

Sharing similar concerns to Hueso, Republican Sen. Shannon Grove of Bakersfield commended SB 890 and asked her Democratic colleagues what the backup plan is for replacing the 120 commodities grown in the Central Valley when the state can no longer supply the needed water.

Yet SB 890 failed to gain the support of the former chair of the Assembly Agriculture Committee, who has since transitioned to the upper house. Sen. Susan Eggman of Stockton argued that building more surface water storage would be “doubling down on techniques we used 100 years ago” and that Sites would be just another empty reservoir during droughts.

Sen. John Laird of Santa Cruz, who was leading the California Natural Resources Agency when Prop. 1 passed, argued that coastal agricultural communities would not benefit from that measure, since “not a dime” would go to the Salinas or Pajaro Valleys in his district.

“Unfortunately, the coastal cousin was not invited to the wedding,” said Laird. “But we were invited to pay taxes to pay for the wedding.”

He also charged that no amount of additional money would speed up the environmental review process for projects like Sites. Laird and other Democrats maintained that the beneficiaries should pay for Sites, meaning farming communities should cover the entirety of the estimated $3.9 billion cost for construction.

Skepticism in the Senate over Sites could lead to a political divide with Gov. Gavin Newsom, who often touts the commission’s efforts in advancing Prop. 1 and has outlined Sites as a priority action within the Water Resilience Portfolio.

Neither Borgeas nor Nielsen will seek reelection in November, but both anticipate the issue of funding water storage will return to the Legislature as the drought deepens.

“Though I will not be here, this issue will be back,” predicted Nielsen. “And it looks like we're headed towards another great disaster, because we have little chance now to fill any reservoirs. … And if we thought it was bad this year, lives are going to change next year. I assure you.”