Lawmakers concerned about grueling fire seasons ahead are pushing the Forest Service to look closely at how best to protect public lands.

One of the agency’s primary tactics — allowing timber companies to log in federal forests — is getting pushback from Democrats and environmental activists, who argue that does nothing about the flammable branches and shrubs that remain on the ground and also doesn't help address climate change. Rep. Ro Khanna, D-Calif., believes there is Republican support for reducing logging.

“I think the argument that we shouldn't be cutting down big trees is something that can cross partisan divides,” Khanna told Agri-Pulse.

Wildfires scorched more than 10 million acres of U.S. land in 2020, 2017 and 2015, and some states have experienced record-size wildfires in recent years, according to the Forest Service. Colorado, for instance, saw three of its largest wildfires in 2020. A total of 12,255 structures in the state were burned that year. Moreover, wildfires release carbon into the atmosphere, negating the climate change benefits provided by the trees.

The Forest Service, which is part of the Agriculture Department and responsible for managing public forests and grasslands, uses prescribed fire, mechanical thinning, targeted grazing, herbicides, Good Neighbor Authority agreements, Tribal Forest Protection Act agreements, and stewardship contracts to manage wildfires. Forest Service Chief Randy Moore told lawmakers at a House Oversight Subcommittee on the Environment hearing that the agency's efforts have been bolstered by $3 billion in provisions for fire management included in last year’s Bipartisan Infrastructure Law, but it still has 40% fewer natural resource professionals than it needs. 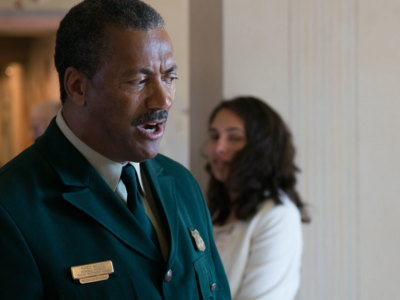 “We're not managing the forest to the level that we used to in the past,” Moore said. “A part of that has to do with how fire has significantly grown in this country. As fire has increased, fire seasons have turned into fire years.”

In January, the agency announced a 10-year Wildfire Crisis Strategy, which it hopes will treat an additional 20 million acres of national forests and grasslands. The plan focuses specifically on the Western U.S. and looks to quadruple the number of fuels treatments used, assist at-risk communities to implement prevention and mitigation, and put between $140 to $260 million annually toward reforesting these areas.

But other panelists at the hearing, including singer-songwriter Carole King and Dominick DellaSala, a scientist with the Earth Island Institute, said removing trees fails to address "the root causes of the wildfire problem — greenhouse gas emissions. That also means storing carbon in protected forests, not adding more emissions by logging them."

Moore, however, said he believes the traditional methods and partnerships with the logging industry are important to keep. He said the agency is looking into finding alternative markets for smaller, flammable materials to help get them off the forest floor.

Those new markets include nanofibers, biofuels and advanced wood products, according to discussions at a recent House Agriculture Committee hearing on what USDA should do about climate change. Glenda Humiston, the vice president for agriculture and natural resources at the University of California, told the committee she’s been part of a group of rural county supervisors who have found a market in Asia for wood pellets.

“It’s a short-term solution. Wood pellets are not a long-term fix, but they’re a great solution in the next 5 to 10 years,” Humiston said.

During the Oversight Committee hearing on wildfires, DellaSala, King and Michael Gollnar, an associate professor of mechanical engineering at UC Berkeley and a fellow at the Berkeley Fire Research Lab, also argued for more money to be put toward “hardening houses.” Homeowners can add screens to vents, use non-combustible building materials, and constantly maintain and remove flammable litter from their residences to reduce fire damage.