Democratic Party leaders are considering downgrading Iowa’s outsized role in the presidential nominating process, which has long forced candidates to pay far more attention to farm and biofuel policy than they otherwise would.

Iowa’s heavily white electorate isn’t viewed as representative of the party’s base, and a draft policy being considered by the Democratic National Committee's rules committee would create a new process for selecting the order in which state nominating contests would be held. Priority would go to states based on factors such as their diversity, competitiveness in the general election and the ability to administer primaries.

The committee will consider the proposal in April, according to multiple media reports.

In the run-up to the Iowa caucuses in February 2020, many of the Democratic candidates visited farms and ethanol plants in the state and participated in forums, including one sponsored by the Iowa Farmers Union, to listen to farmers and answer questions about their positions on agriculture policy. Candidates frequently pair rural campaign tours with trips to the annual Iowa State Fair in Des Moines, as Vice President Kamala Harris (shown above) and other candidates did in 2019.

“I understand the need to make sure the party nomination process is fair, transparent and equitable. More than ever, there is also a need to connect with rural voters in a real and authentic grassroots fashion. This is clearly a strength of the Iowa caucus system,” Aaron Lehman, president of the Iowa Farmers Union, told Agri-Pulse this week.

“Farm visits, candidate rural issue forums, and small-town listening sessions have been essential parts of setting the agenda for the current administration and past administrations,” he added.

Losing the first-in-the-nation status would also be a blow to the state party’s effort to “build a lasting rural constituency," Lehman said.

The problem for Iowa isn’t just its lack of racial and ethnic diversity. The state party also botched the vote-counting in 2020, and turnout also fell below expectations.

The political analysis site FiveThirtyEight analyzed the criteria the Democratic National Committee is considering for prioritizing state primaries and found Iowa wouldn’t be in the running for the early position. The analysis gave each state a score based on issues such as its diversity, union membership and general election competitiveness; Nevada and New York were virtually even with the top scores, followed by New Jersey and Hawaii.

Among the top 10 states in agricultural production, only Illinois and California scored in the top 10 of potential early Democratic primary states based on the FiveThirtyEight analysis. Illinois had the ninth highest score, followed by California at No. 10. Iowa was 48th, followed only by West Virginia, North Dakota and Wyoming; all 50 states and the District of Columbia received scores.

The analysis notes state laws also will be a factor in determining the order of states, no matter what the DNC does. Iowa law requires the caucuses to be held eight days before any other state contest. "While it’s clear Iowa and New Hampshire have plenty of reason to worry, don’t necessarily bet against them kicking off the cycle again in 2024," the analysis said.

Agriculture Secretary Tom Vilsack, who advised President Joe Biden on ag policy ahead of the 2020 caucuses, has said Democratic candidates took an increased interest in Iowa and ag policy in 2019 and 2020 because they feared repeating Hillary Clinton’s dismal rural showing in 2016.

While campaigning in Iowa, Biden proposed a rural plan that included a pledge to make “American agriculture the first in the world to achieve net-zero emissions” while also reducing farmers’ vulnerability to the market power of major agribusiness companies. Both issues have been major themes of the administration. 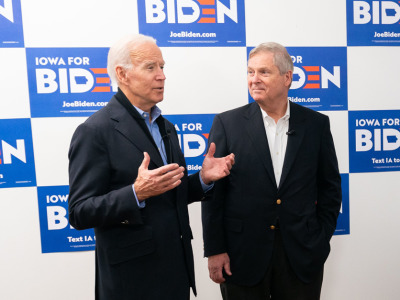 Biden wound up third in the Iowa caucuses behind Pete Buttigieg, now his transportation secretary, and Vermont Sen. Bernie Sanders.

Patty Judge, a former lieutenant governor of Iowa who led Democratic candidates on tours of ethanol plants ahead of the 2020 caucuses, says the state's relatively small size and first-in-the-nation status forces candidates to crisscross the state to meet voters and address their issues. She says the state is becoming more diverse and notes that Buttigieg is openly gay and that former President Barack Obama carried the state twice.

"There is not much of greater importance than making certain our nation has secure food and fuel sources and is committed to tackling issues of water quality and climate change. A change in the caucus calendar could alter that radically," she said.

Republicans have had their own problems in Iowa, but there has been no discussion within the national party about downgrading the state.

The Republican process in Iowa works more like a simple straw poll; the votes of caucusgoers are tabulated for each candidate. In 2012, Mitt Romney was erroneously declared the winner over Rick Santorum by eight votes on caucus night. The final count favored Santorum by 34 votes.

Senate Republican Whip John Thune, R-S.D., told Agri-Pulse it’s important that candidates pay attention to Midwest voters early in the nominating process and that the Iowa caucuses have forced candidates to do that.

“All these candidates have had to take a position on farm bill policies, on ethanol production and things like that. That’s of great value, obviously, for agriculture and for the entire rural economy,” he said.

Forcing candidates to take stands on ag-related issues also means they can be held accountable as president if they diverge from campaign positions, said Sen. Chuck Grassley, R-Iowa.

"Agriculture is a leading industry in our state and every Republican and Democrat who comes through has to know something about agriculture, so it educates them if they ever become president," he said.

Monte Shaw, executive director of the Iowa Renewable Fuels Association, said in an email that the caucuses offered "an awesome educational opportunity for candidates that don’t have an ag background (i.e. most of them). They came. They saw. They talked to real farmers. And most walked away better disposed than before… when they relied on the WSJ editorial page or the NY Times to form their ag views."