Daybreak March 31: USDA report to show how farmers are responding to war

USDA today will release its annual survey of farmers’ planting intentions, which will be the department’s first good reading on how much farmers will shift their crop mix as a result of the Ukraine war and soaring costs for fertilizer and other inputs.

But Rich Nelson, chief strategist for Allendale Inc., says the Prospective Plantings report is unlikely to show any dramatic shifts in acreage between corn, soybeans and wheat because demand is strong for all three crops. Allendale estimates farmers will plant a million fewer acres of corn this year and 2 million more acres of soybeans.

Soaring prices for vegetable oils and fertilizer would ordinarily pull a significant number of acres into soybeans. But prices for wheat and corn are also strong, Nelson notes.

By the way: Pork industry analyst Joseph Kerns says U.S. hog producers have received a “net positive” from the war in Ukraine due to the increased hog prices that are more than covering higher input costs. Even if those costs double this year, producers will make more than $185 a hog, he said on a Pork Checkoff webinar.

Senate leaders are continuing to work toward an expedited vote on the Ocean Shipping Reform Act.

Senate GOP Whip John Thune, a co-sponsor of the bill, the leadership has hotlined the bill for a second time to gauge support for the measure after some modifications were made. The South Dakota Republican didn’t specify the changes.

Senate Agriculture Chairwoman Debbie Stabenow, D-Mich., told Agri-Pulse the bill could potentially pass the Senate by unanimous consent. The measure, which the House would still have to approve before it goes to President Joe Biden, is intended to force ocean carriers to accept more U.S. exports and reduce shipping rates.

At least 11 million laying hens have been lost so far to avian flu, and that’s further squeezing egg supplies heading into Easter, according to an analysis by CoBank, which serves farmer cooperatives and other agribusinesses as well as rural public utilities.

The latest USDA weekly report on shell egg demand shows there are about five days of inventory, “which normally suggests a tight, but not alarmingly tight supply. However, it does not appear that supplies will be able to accommodate the reduction in layers as a result of HPAI outbreaks, especially at a regional level,” the report says. 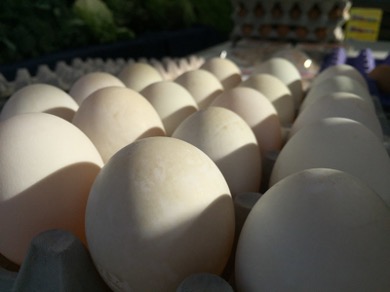 The industry was disrupted significantly by the pandemic, and the national flock has been shrinking during a transition to cage-free housing.

Tai: Looking for a strategy on Canadian dairy quotas

There’s been no improvement in U.S. dairy access to the Canadian market, U.S. Trade Representative Katherine Tai told the House Ways and Means Committee on Wednesday. She stressed that she wants to work with Congress and the U.S. dairy industry on a strategy “for where we go next” on confronting Canada.

Canada earlier this month released its proposal on how it would change its tariff rate quotas for U.S. dairy. That followed a USMCA panel ruling in favor of the U.S. after it charged the Canadian government with manipulating the quotas. The U.S. industry widely panned the Canadian proposal. The Biden administration did not respond publicly.

“There is a clear understanding on our side that dairy market access would be improved under the USMCA,” Tai said. “We have not seen that. And so from a USTR perspective, we will not give up. We’ll continue to work with our stakeholders.”

The Food and Drug Administration is seeking more comments on the safety of carbadox, sold as Mecadox, as it works to determine whether the swine drug should continue to be allowed on the market.

FDA’s Center for Veterinary Medicine held a public hearing earlier this month and originally sought comments by April 11, but is now extending that deadline until June 10.

Both Phibro, the maker of the drug, and the National Pork Producers Council have objected to FDA’s 2020 proposal that said the current testing method for the drug does not provide adequate information about carcinogenic residues.

In a new release in January, Phibro said Mecadox “has been approved and sold in the United States for 50 years and is a widely used treatment for controlling bacterial diseases in swine, including Salmonella and swine dysentery, resulting in improved health and welfare for newly born and young pigs.”

The drug, which has been banned in Canada, Australia and the European Union, also helps with weight gain, according to the company.

EPA is looking for members for its Farm, Ranch, and Rural Communities Federal Advisory Committee, which advises the agency on environmental issues associated with agriculture.

The committee recently received a new charge from EPA Administrator Michael Regan “to focus on advancing climate change mitigation and adaptation strategies for U.S. agriculture,” the agency said in asking for nominations by May 16.

She said it. “I’ve been talking to some really, really smart people, one of them is Tom Vilsack.” - U.S. Trade Representative Katherine Tai, when pressed by a lawmaker on the need for experts - “really smart people” - to be consulted on the impact of the Ukraine war on food supplies.