Agriculture Secretary Tom Vilsack is refusing to open the Conservation Reserve Program to cropping this year. In a letter to the National Grain and Feed Association, he says only about 1% of prime farmland is enrolled in the program. And notably, he suggests many landowners with expiring CRP contracts may not be re-enrolling their land this year.

USDA has yet to announce the results of the latest general signup that closed last month. But 4 million acres are in expiring contracts, and Vilsack says in the letter: “While our Farm Service Agency field offices are still finishing processing the General CRP offers, our data reflect the reality that, with higher commodity prices, producers are not re-enrolling all of these acres in CRP.”

Vilsack says “high prices for this year’s crops will motivate producers to plant more acres of wheat, soybeans, and corn, with the main limiting factors being weather and soil moisture conditions. … There is no need to step in and adjust the program when producers themselves are making decisions based on market conditions and environmental realities.” 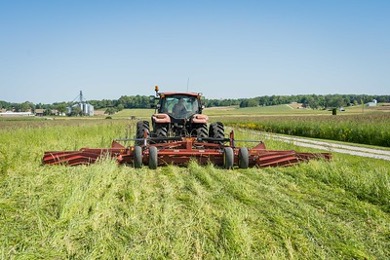 Keep in mind: It’s not clear whether CRP will ultimately expand or contract this year, because Vilsack doesn’t say how much new land has been offered for enrollment.

Some acreage coming out of CRP this fall could conceivably be planted to winter wheat, if there is market demand for it.

A new report from the Intergovernmental Panel on Climate Change says humanity has to act quickly to reduce CO2 emissions and that agriculture can help address the problem, within limits.

A summary for policymakers says measures to reduce emissions in agriculture, forestry and land use (AFOLU) “can deliver large-scale GHG emission reductions and enhanced removals, but cannot fully compensate for delayed action in other sectors.” There also are ag and forestry products that can substitute for more carbon-intensive products, the report notes.

The report cautions that while emerging technologies for reducing methane and nitrous oxide emissions in ag “show promising results” they are “still constrained by cost, the diversity and complexity of agricultural systems, and by increasing demands to raise agricultural yields, and increasing demand for livestock products.”

Reaction: The Environmental Defense Fund, a founding member of the Food and Agriculture Climate Alliance, responded to the report by calling for “a rapid, full-scale effort to reduce methane pollution from all sources.”

Fellow FACA founding member The Nature Conservancy stressed the potential for progress from the AFOLU sector “by combining reforestation with the restoration of croplands, wetlands and mangroves.”

Farmers in 21 of Ukraine’s 24 regions – or oblasts – have begun planting spring wheat, barley and other crops, according to the Ukrainian consulting firm APK-Inform. Farmers are out in the fields early this year, but they’ll be producing less, according to the firm, citing Ukraine’s Ministry of Agrarian Policy and Food.

The ministry expects farmers to plant 33.2 million acres in Ukrainian-controlled territories this year, according to APK. That’s 8.6 million acres less than in 2021.

A bipartisan deal on a new COVID aid package is paid for in part by rescinding $1.6 billion in unspent USDA funding. The money was originally provided to the department through the CARES Act and the American Rescue Plan.

Another $900 million would come from the Small Business Administration’s Economic Injury Disaster Loans. The White House endorsed the new bill.

A bipartisan group of nine senators is urging EPA to revise its greenhouse gas modeling for biofuels based on a modeling system developed by Argonne National Labs.

The group, led by Sens. Amy Klobuchar, D-Minn., and John Thune, R-S.D., said using Argonne’s Greenhouse Gases, Regulated Emissions and Energy Use in Transportation Model – also called GREET – would allow “stakeholders to have a consistent and well-vetted standard through which all biofuels may be compared.”

The senators say research shows corn ethanol can have a 46% lower lifecycle carbon intensity than gasoline and that higher blends like E15, E30, E85 and B20 would further help reduce GHG emissions.

Keep in mind: Two months ago, Thune and Klobuchar introduced the Adopt GREET Act to require EPA to use GREET. EPA is currently undergoing a review of its scientific methodology and modeling of GHG emissions from biofuels.

Fischer, who’s a member of the Senate Commerce Committee, says she’s concerned that satellite systems will benefit areas that already have broadband. Unserved areas are “where the investment must be made,” she said in a webinar hosted by the American Enterprise Institute.

She also believes states need to better organize their broadband programs in light of the funding they’ll get though the bipartisan infrastructure law.

A federal advisory committee focused on ag research is seeking nominations for a new subcommittee on pollinators.

The National Agricultural Research, Extension, Education, and Economics Advisory Board asked for nominations by May 31, in a Federal Register notice published today.

She said it. “I believe governmental services should be able to provide the basics. To me, that is fiber to the home.” - Sen. Deb Fischer, R-Neb., on why fiber should be funded over satellite broadband service.